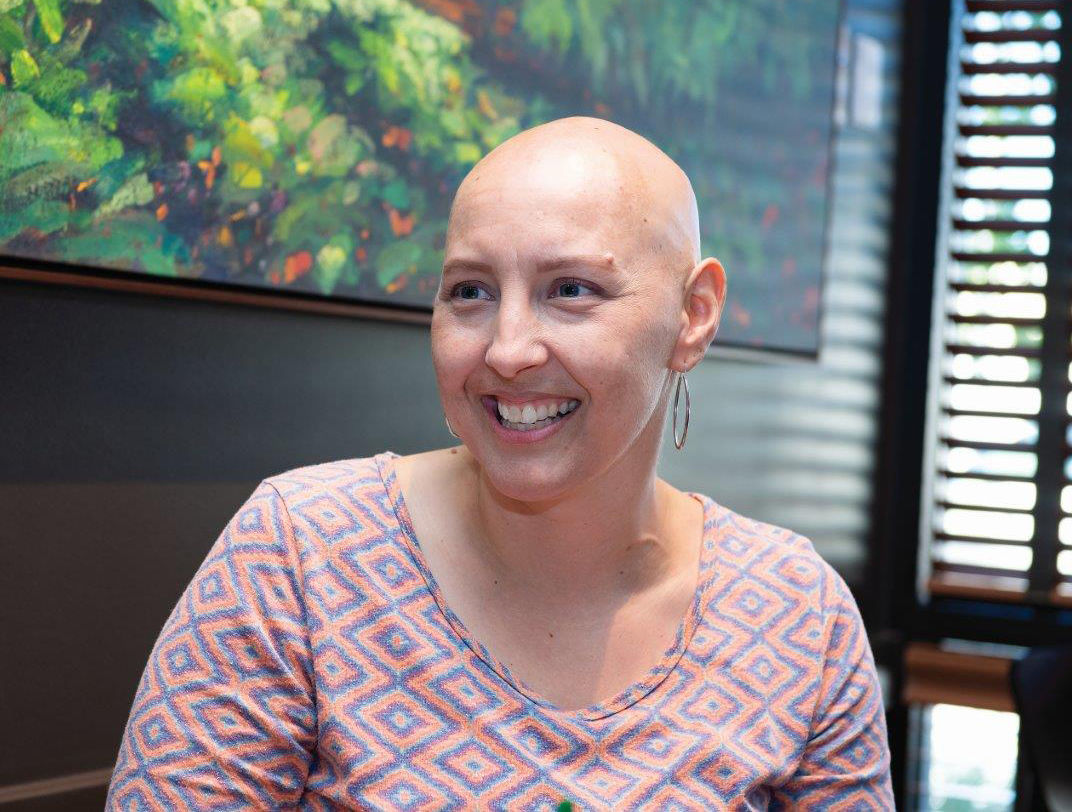 Rachael Boucher was just 37 years old when she was diagnosed with aggressive invasive ductal carcinoma. Her husband discovered it. 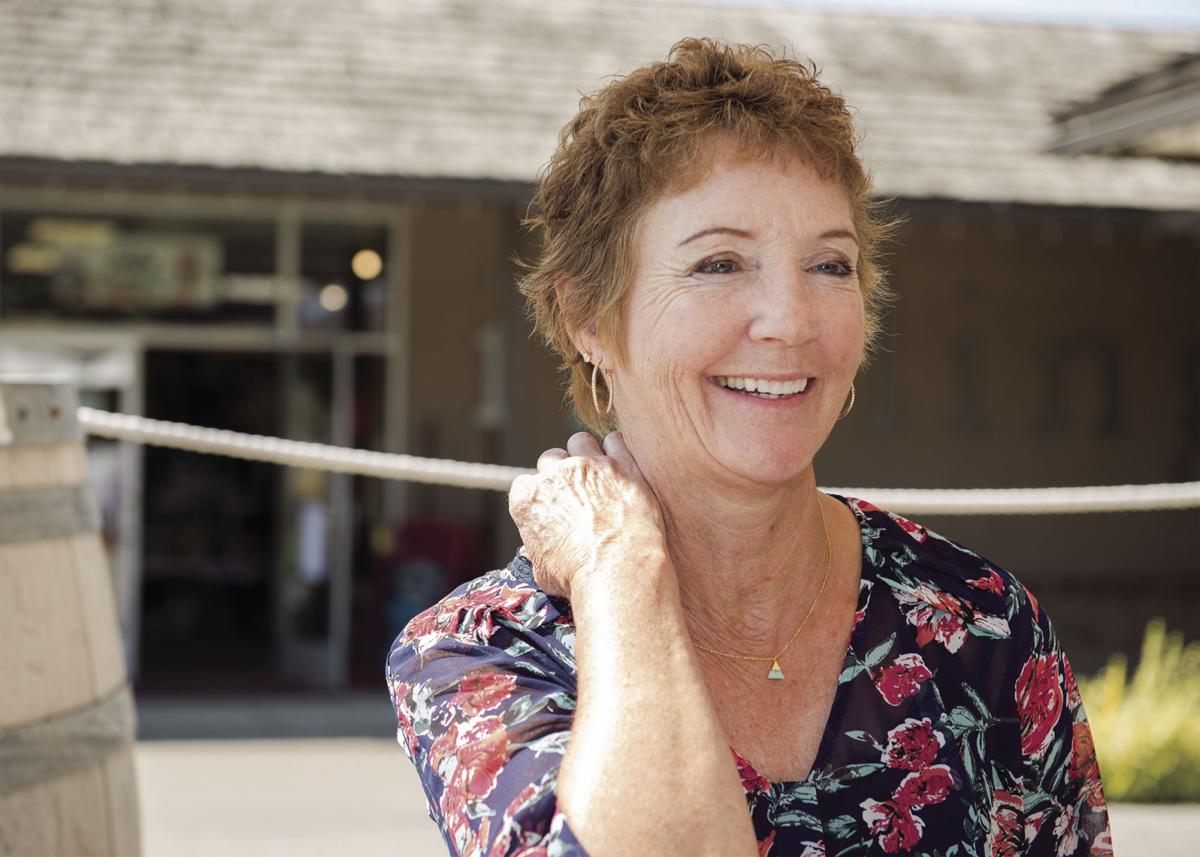 Linda Amendola got so busy with a recent move to Yakima she skipped her mammogram. But she didn't forget her regular self-exam, which is how she discovered some suspicious dimpling that turned out to be breast cancer. 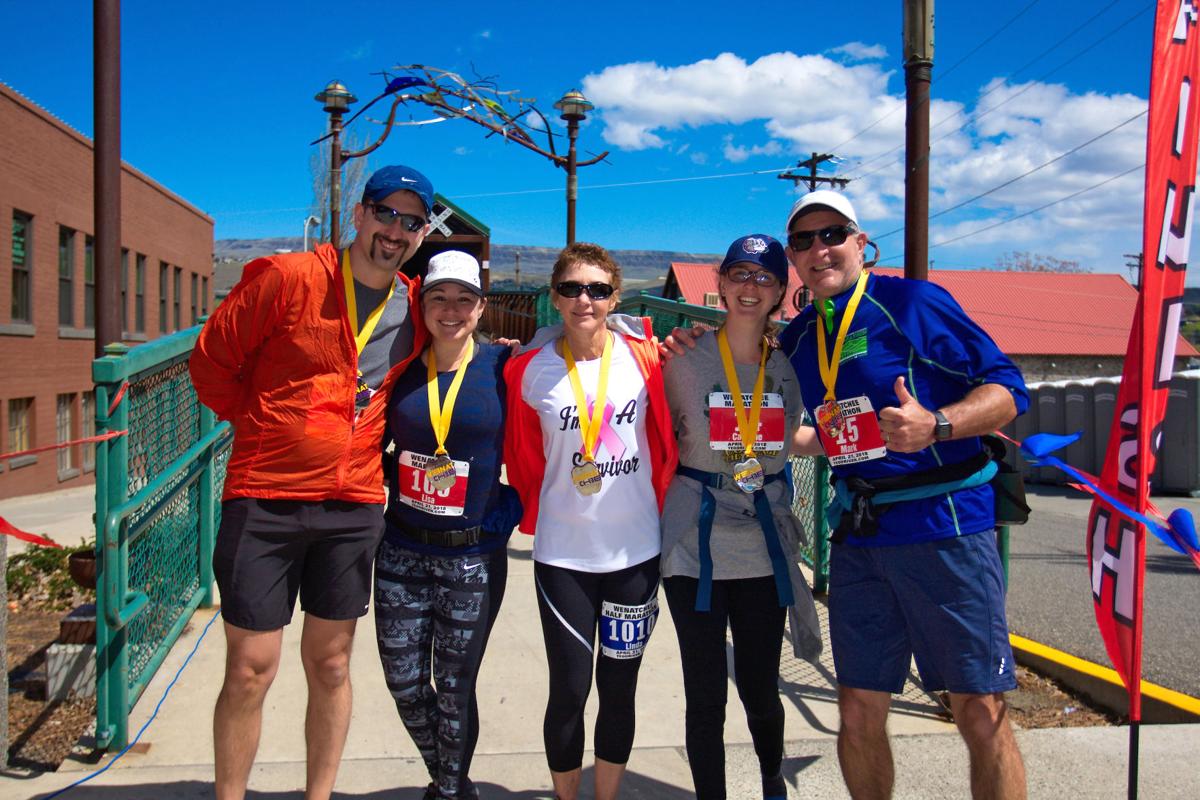 Linda Amendola, in the center in the white T-shirt, surrounded by her family at the Wenatchee Marathon in April. She ran the half-marathon even before she had finished chemotherapy.

Rachael Boucher was just 37 years old when she was diagnosed with aggressive invasive ductal carcinoma. Her husband discovered it.

Linda Amendola got so busy with a recent move to Yakima she skipped her mammogram. But she didn't forget her regular self-exam, which is how she discovered some suspicious dimpling that turned out to be breast cancer.

Linda Amendola, in the center in the white T-shirt, surrounded by her family at the Wenatchee Marathon in April. She ran the half-marathon even before she had finished chemotherapy.

“You’ll know me,” says Rachel Boucher. “I’m 5 feet, 7 inches — and I have no hair.” And there she is, standing at the counter at Starbucks helping her son Andrew and daughter, Natalie, pick out a whipped-creamy, coffee-type drink. Rachel Boucher, wife, teacher, mom of three. And currently patient, in treatment for aggressive invasive ductal carcinoma. Breast cancer.

“When we found out, we had just put an offer on a house,” Rachel says, her hands gripped around an iced mocha. “My husband’s in the military and we’ve been here for the past three years. The kids really like it here — we all do — and we decided that this is where we want to live.

“We thought maybe we shouldn’t buy the house, though, because we didn’t know what would happen, but Dr. (Nanette) Robinson at Virginia Mason (in Seattle), told us, “This is fixable. Why wouldn’t you buy the house? “I thought, yeah, this took our family’s security away, and we can’t let it take away one more thing.”

Rachel was 37 when she was diagnosed on Feb. 20, 2018, after a mammogram, ultrasound and biopsy at `Ohana, Virginia Mason Memorial’s Mammography Center. `Ohana nurse navigator Betsy Medrano handed her a copy of “The Comprehensive Patient Navigation Guide: Breast Cancer Treatment Handbook” with this advice: “Read it. Knowledge is your weapon.”

Within days Rachel was off to Seattle for surgery at Virginia Mason and then on to North Star Lodge for chemotherapy and radiation. As she speaks, Rachel has two more chemotherapy treatments before beginning radiation therapy.

“My husband found it,” Rachel says of the lumps in her right breast. “We didn’t think it was that big, but there were five tumors and it had spread to my lymph nodes.

“I had breast reduction surgery. They told me it was better to keep some of the tissue because you can’t get follow-ups (with mammograms and tomography) without it. I asked my surgeon, Dr. (Janie) Grumley, ‘What about my other breast?’ She told me, ‘We can make them match! We want everything to be pretty.’ And that’s what they did.”

A few weeks later, Rachel returned to Virginia Mason to have more tissue removed, ensuring there were no lingering cancer cells. “There’s been more science involved in all of this than I ever thought possible,” said Rachel.

Meanwhile, when able, Rachel was teaching fourth grade at Robertson Elementary, preparing to move and tending to her family — husband Patrick, a master sergeant in the Army, daughter Hannah, 16, son Andrew, 14, and daughter Natalie, 7.

“When we told the kids, Hannah completely broke down. Natalie was in shock; she yelled, ‘Don’t touch me!’ Andrew was also in shock, but quiet. I realized Natalie thought it was contagious: I assured her it was not. Then I told Hannah, ‘It’s OK. Hannah, I’m a bad-ass mother!’”

“My parents dropped everything and flew right out to be with us. My mom even made me a quilt with BAM on it and T-shirts for the kids and Patrick. So, now I really am a bad-ass mother.”

Rachel is comforted by the results of genetic testing at North Star Lodge: There are no genetic markers for breast cancer in her family. “North Star is amazing. The volunteers are amazing. And the women who make the hats and scarves (The North Star Knitters). I was looking online for a seatbelt cover because of the medication port in my chest, but they had them at North Star.”

“You never know what’s going to happen. Patrick, though, has been my rock. It’s been crappy circumstances, but it’s made us even closer.”

The couple had previously planned an anniversary trip Las Vegas. Rachel shuffled chemotherapy appointments. They kept the date. “Since my hair started falling out and I shaved the rest of it, people keep complementing my hair. It’s the weirdest thing,” she says. “The Uber driver who picked us up said, ‘I love your hair.’ I said, ‘Thanks??’ It happened twice!

“It’s been really hard, but I feel I’ve been lucky through the chemo, I didn’t get sick. You really do never know what’s going to happen.”

Linda Amendola, 61, is a runner. She eats healthy food and has never smoked. And, for work, she is a mammogram technician. None of that mattered, though, when Linda got breast cancer. “I do regular self-exams and I noticed a little dimpling,” she begins. “I never thought it would happen to me.” And then, “I shouldn’t have skipped my mammogram.”

Yep. Cancer happens even to the professionals. When Linda skipped her mammogram, the Amendolas were moving to Yakima from Oregon. Her husband, Mark, was already here settling into his job. She was working full time and selling the house there. “I think everybody thinks it won’t happen to them,” she says. “But I had a sister-in-law who died of breast cancer at 38 and another one who is a 10-year survivor.”

Linda’s breast cancer, invasive ductal carcinoma, wasn’t discovered until she joined Mark here and began her job at `Ohana, Virginia Mason Memorial’s Mammography Center. “I saw how large it was when I saw the mammogram images. I was very fortunate not to have involvement of my lymph nodes.”

Soon after the discovery, in April 2017, Linda began chemotherapy with Dr. Vicky Jones at North Star, had a lumpectomy to remove the tumor and then started radiation with Dr. Steven Register. “North Star was wonderful. The nurses are so compassionate, even the front desk people, everyone,” she says. “If I didn’t have North Star I would have been driving to Seattle every three weeks for a year.” “Linda’s tough,” says Mark. “But North Star Lodge is the real hero.”

Mark and their two daughters were there for Linda every step of the way. “They were very, very supportive. And Mark was awesome: he cooked, he cleaned, he went to every chemo and doctor’s appointment with me. “I also had great co-workers who called to see if they could go to the grocery store or do any cooking for me.” Today, though, Linda has completed her year of “exhaustion and everything tasting bad — even ice cream!”

“I just had my (chemotherapy) port removed on Tuesday. I’m all finished!” Now it’s back to life at full throttle. Even before she finished chemotherapy, Linda joined her family at the Wenatchee Marathon on April 20, 2018, running the half. “It wasn’t pretty,” she says. “It was my slowest half ever, 2:17.” Perhaps. But her previous marathon times make Linda automatically eligible for the New York Marathon this November.

“I don’t know why I developed breast cancer but, because I did, God has brought the most wonderful people into my life. “Life is good,” she says over a cup of coffee, the sun making her smile even brighter. “I have a lot to look forward to. We like to travel. We have a trip planned to Tahiti. So that’s the goal.”

Has her own experience affected her work at `Ohana? You bet. “I’m extra supportive now, especially about the fear factor. Now I know. ”