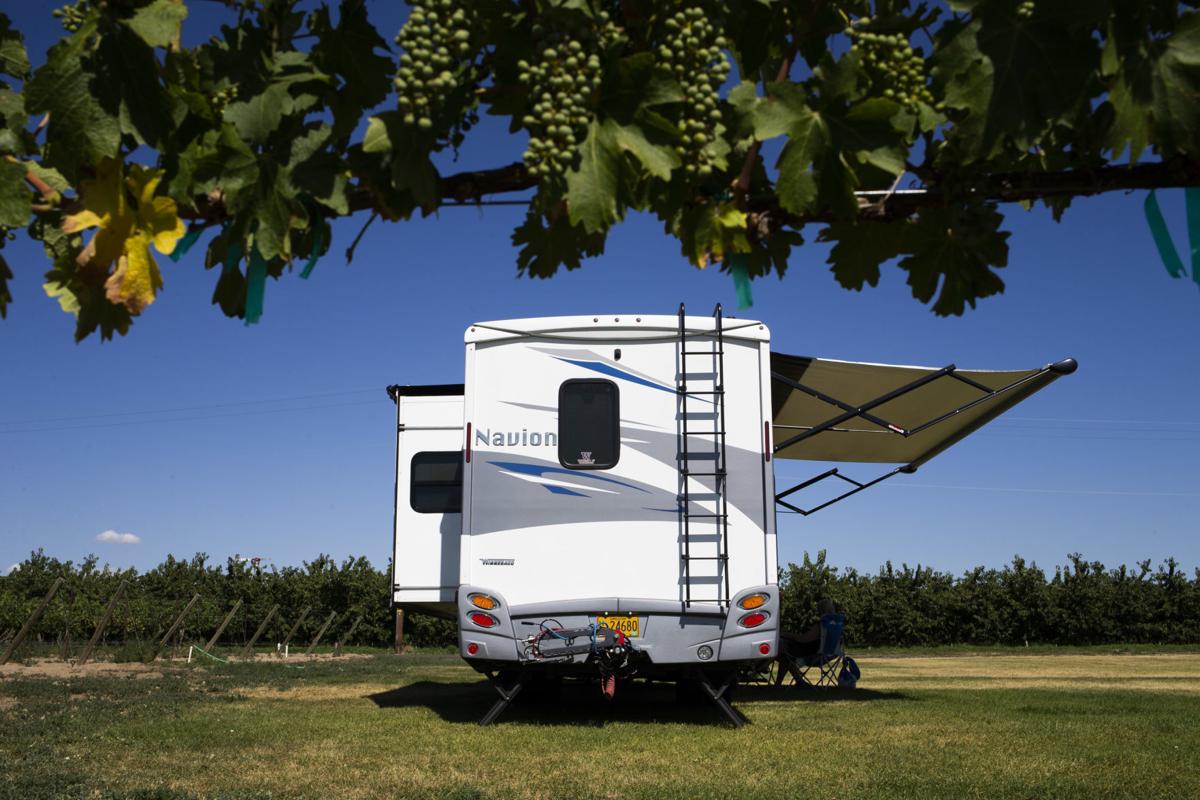 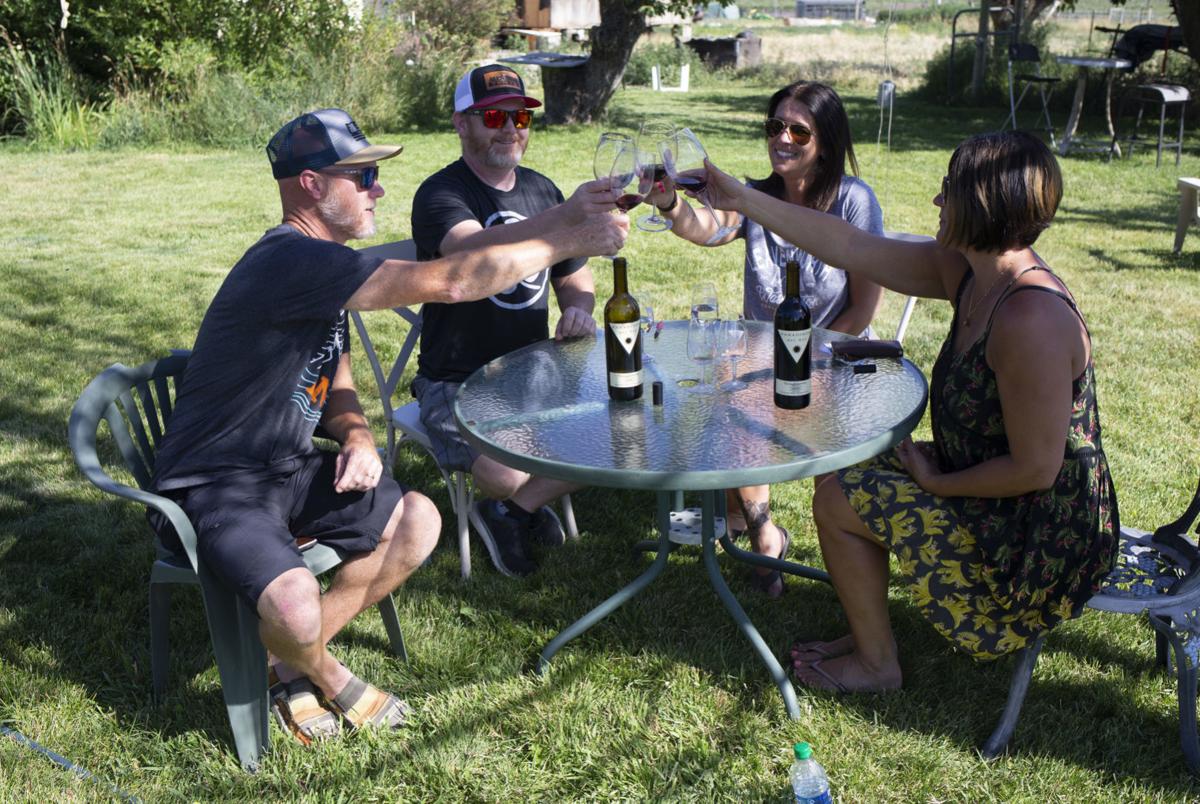 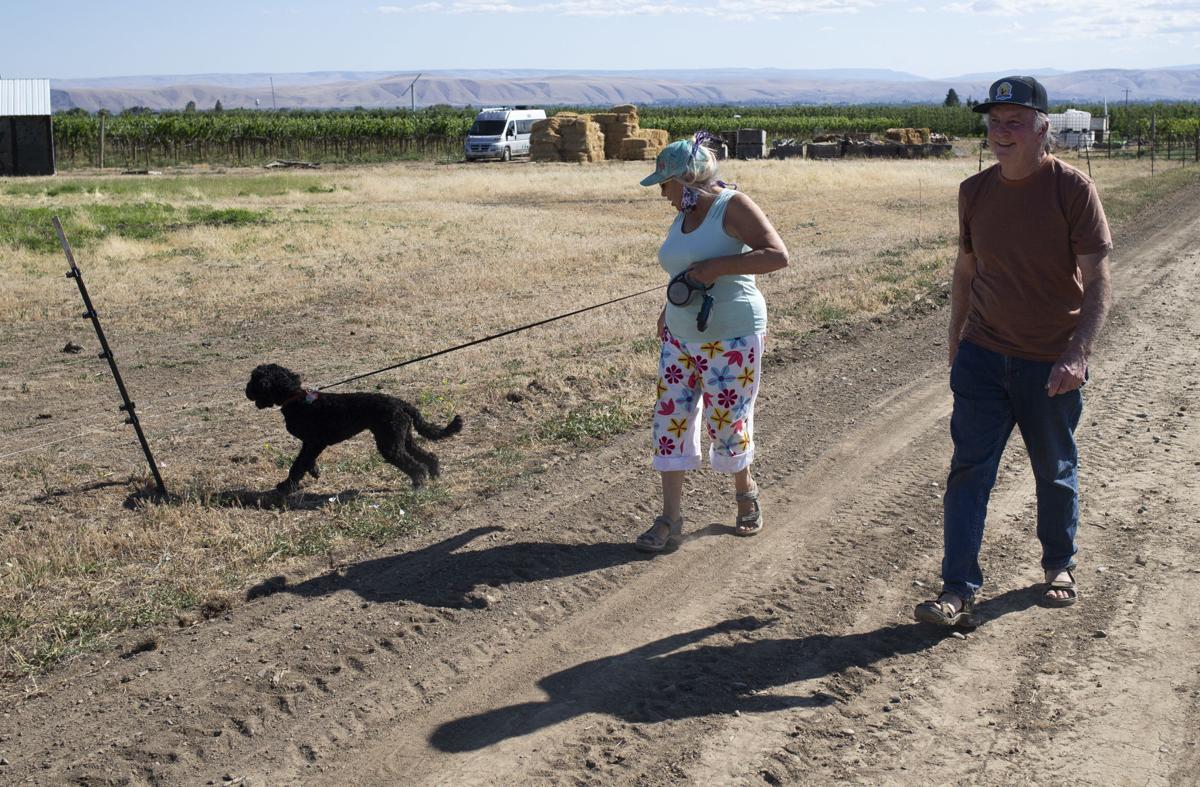 Married couple Linda Powers and Jim Masur walk toward Paradisos del Sol Winery with their dog Manny after parking their RV in the vineyard on Wednesday, July 8, 2020 in Zillah, Wash. 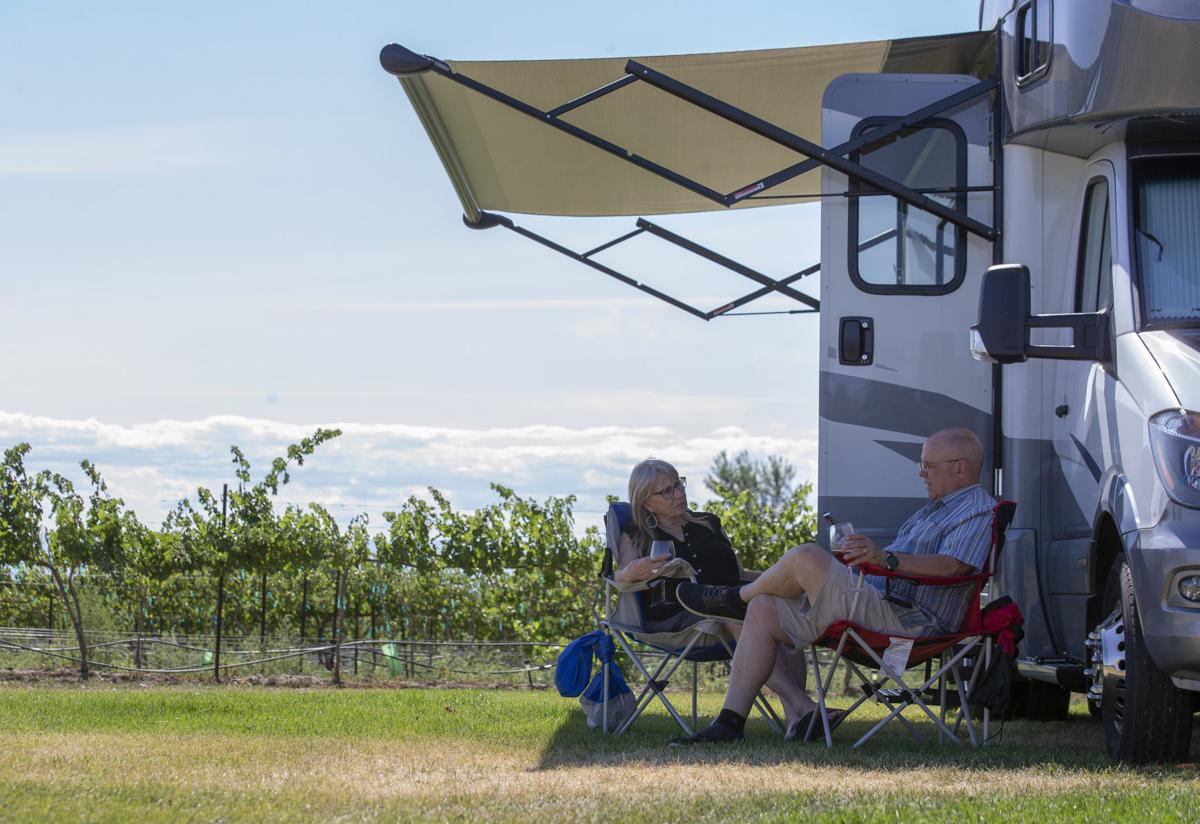 Kathy Nicholson and Jon Nicholson drink wine in the shade at Bonair Winery while RV camping through Harvest Hosts on Wednesday, July 8, 2020 in Zillah, Wash. 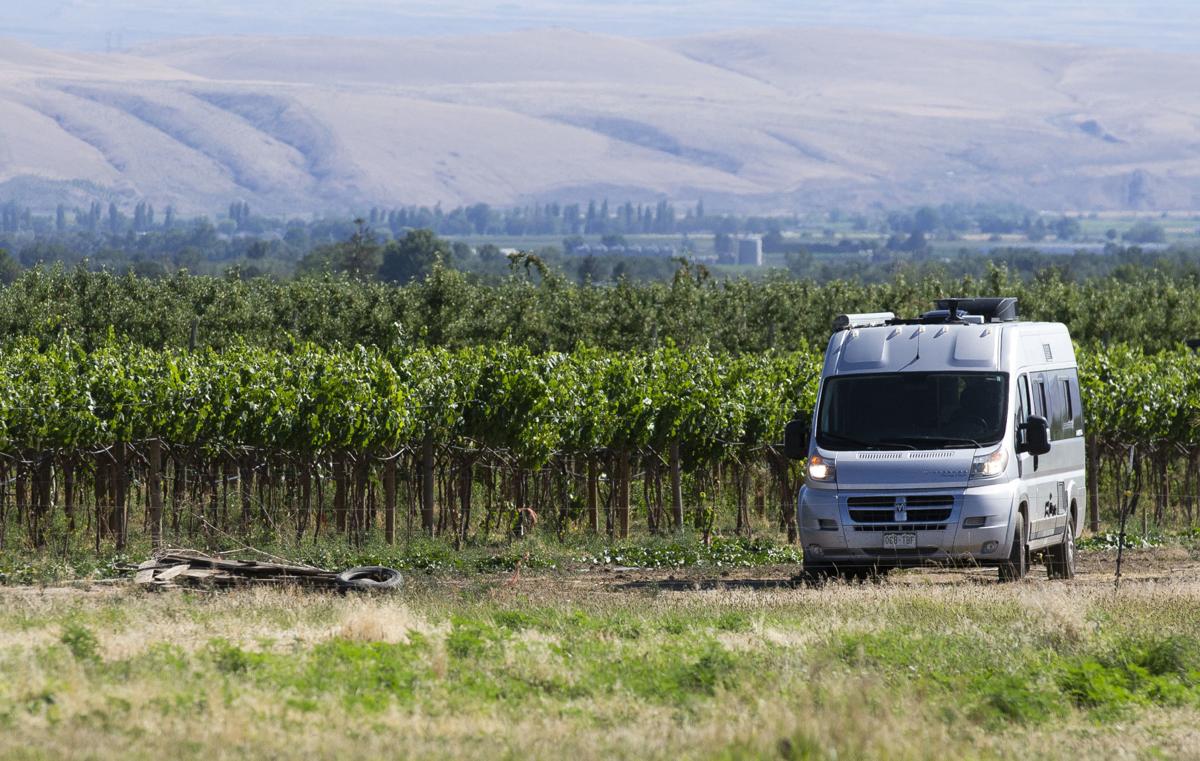 Married couple Linda Powers and Jim Masur park their RV in a vineyard while arriving to camp at Paradisos del Sol Winery and Organic Vineyard through Harvest Hosts on Wednesday, July 8, 2020 in Zillah, Wash.

Married couple Linda Powers and Jim Masur walk toward Paradisos del Sol Winery with their dog Manny after parking their RV in the vineyard on Wednesday, July 8, 2020 in Zillah, Wash.

Kathy Nicholson and Jon Nicholson drink wine in the shade at Bonair Winery while RV camping through Harvest Hosts on Wednesday, July 8, 2020 in Zillah, Wash.

Married couple Linda Powers and Jim Masur park their RV in a vineyard while arriving to camp at Paradisos del Sol Winery and Organic Vineyard through Harvest Hosts on Wednesday, July 8, 2020 in Zillah, Wash.

ZILLAH — In opening Simcoe Creek Winery a little more than a year ago, Joe and Alison Campbell hoped to welcome wine lovers and others. They created a popular red blend and organized a variety of events, including a free summer concert series.

They also signed on with Harvest Hosts, a network of more than 1,100 wineries, breweries, farms and museums in the United States and Canada where members can stay overnight for free in their recreational vehicles. The couple heard about it from nearby wineries.

“We were really just looking for a way to bring more people into the winery — trying to do as many different things as we could to bring in new customers and gain our own following,” Joe Campbell said of their winery at 2911 Roza Drive, which opened in May 2019.

After a slow start last year, Harvest Hosts “has been insane this year,” Campbell said. It began picking up in March, dropped off a little in April and took off in May.

“About two weeks before Memorial Day weekend, we were fielding four, five, six calls a day asking what our availability was, if people could stay multiple nights,” he added. “We’ve had four or five campers every weekend ever since. ... I think we had roughly 36 last year from May to Dec. 31 and I bet we are over that already this year.”

And the visitors plan to return, Campbell said: “Everybody who stayed this year so far has wanted to book later this fall already.”

Membership in Vail, Colo.-based Harvest Homes has increased “exponentially” in last few months to more than 30,000, said Lisa Manning, customer success manager. The COVID-19 pandemic has made the option especially appealing as RV owners, finding closed or crowded campgrounds, seek getaways with fewer people so there’s less chance of transmission of the virus. Some want interesting destinations closer to home.

“It’s just a really unique way to get off the beaten path, and it’s social distancing at its finest. A lot of times, it’s just a couple of RVs and they’re spread out,” Manning said.

Members pay an annual fee and must have a self-contained RV with a toilet, water tank and inside cooking facilities; these are ”dry camping” locations with no hookups. They make reservations by calling sites to check availability and reserve a spot. Upon arrival, they show their membership card and follow Harvest Hosts’ code of conduct.

It’s been a fun experience for the Campbells, who have hosted a variety of “amazingly friendly” people, Joe Campbell said.

“You name it; we’ve met everybody from the weekend warriors to full-time RVers who have remodeled their trailers to allow them to work from wherever they’re at, to the retired couples that try to follow the 70-degree weather year-round,” he said.

“We’ve met some of the absolute coolest people through Harvest Hosts. We’ve made some friends. ... It’s been the coolest program we could have signed up for.”

Washington has 40 Harvest Hosts locations statewide; 53 for members who upgrade to include golf courses, Manning said. They include a fruit ranch in Mead, a car museum in Tacoma, a flower farm in Moses Lake, a lavender garden in Quincy and an alpaca farm in Yelm.

“We have lots of different types of locations for you to stay. It’s great for families, great for single women,” Manning said. “It’s really to kind of replace the big box or restaurant parking overnight. You may go 15 more miles off the road, but you’re in a little safer location.”

“(Members) like ... that they can come out and set up their trailer and go wine tasting,” Campbell said. “What we’ve learned in the last year — they set up (their RV); they do wine tastings at other places, then come home.

“We have a list of wineries we recommend they visit within 2 miles of us, and then they end up coming back. Everybody knows the name of the game is you have to do business at the main location.”

In return for their free stays, guests are encouraged to spend at least $20.

“That’s one of the unwritten agreements. You’re staying for free at a place so it would be nice if you purchased products from that place,” said Shirley Puryear. She and husband, Gail, who own Bonair Winery, have participated in Harvest Hosts since it began in 2010.

“Back in the olden days, up until last year, we’d get maybe one or two a week during the summer. Now with (COVID-19), we get phone calls every day. We have between one and five rigs almost every night,” she said. “A lot of them are first-timers.”

“I swear, every day we get at least two people calling. We have reservations way out into August,” Puryear said. “We’re not complaining. We’re happy.”

‘No traffic, no people, just peace’

The Bonair property at 500 S. Bonair Road features a large grassy field near the winery complex where Harvest Hosts members park. They come from all over the country and as close as Yakima.

“The view is Mount Adams and Mount Rainier. They come in ... come and get some wine, go back on their chairs and sit,” Puryear said. “It’s so fun to watch them lie in their lawn chairs and drink wine. No traffic, no people, just peace.”

Bonair limits RVs to five, but they could probably park more, she said. Five provides plenty of space between them.

“People like us and (Simcoe Creek), if you have very large rigs, we have plenty of turnaround space,” Puryear said. “Not every Harvest Host has room. We have tiny little vans that pull in; that’s fine, too.”

Participants design their setups. Simcoe Creek has designated camping spots, “but we also have almost seven acres of property that we’ve also parked” guests on, Campbell said. “We don’t turn people away, because we have the space.”

Though the website recommends single-night stays, some guests at Simcoe Creek have stayed multiple nights, up to a week. Those tend to be people living in large RVs, Campbell said. They also have hosted first-time RV owners and are happy to help them with their setups.

The COVID-19 pandemic has affected that as well, he said.

“Everybody we’ve talked to that’s brand-new into trailer camping this year, they said it’s been insanely hard to find trailers and they’re flying off the market,” Campbell said.

Harvest Hosts guests at Simcoe Creek want an experience, Campbell said. “They’re looking for being able to create those memories more so than visiting a destination. People are wanting to disconnect. They’re wanting to get out and experience more,” he added.

Bonair is kid and dog friendly. Along with the memorable mountain view, the winery has another a distinctive Yakima County feature, Puryear said: “The thing that Harvest Hosts people like — we have a short dirt road that leads down to the (Sunnyside Canal) and they can walk down to the canal.”

Paradisos del Sol, which owners Barbara Sherman and her husband, Paul Vandenburg, refer to as a “farmery” because it’s a farm and winery, offers the chance to mingle with chickens and turkeys and sheep and a pig and dogs and cats, along with enjoying wine made from grapes grown in a certified organic vineyard at 3230 Highland Drive.

In business for 20 years, the couple started with Harvest Hosts in 2012.

“In the past several years we didn’t get a lot of people, but come summertime people start calling us up,” Sherman said. “With COVID, we started getting people in April and May calling up, and even more frequently now, and even in the middle of the week. People are just wanting to get out of Seattle.”

And away from other locations throughout the country.

“We get a lot of people who have actually sold their house and that’s what they’re living in,” Sherman said, adding that some people have converted Mercedes vans into campers. Though Harvest Hosts discourages grilling, she and her husband allow it. They want people to relax.

“We try to make people feel as comfortable as possible. We really interact with them a lot, because we live here, which is true of some of the other wineries,” Sherman said. “We’re able to be more truly hosts to these people. It gives us the opportunity to really make connections with people.”

With that, Sherman had to cut the interview short to take another call.

“I have someone from Harvest Hosts wanting to make a reservation,” she said.