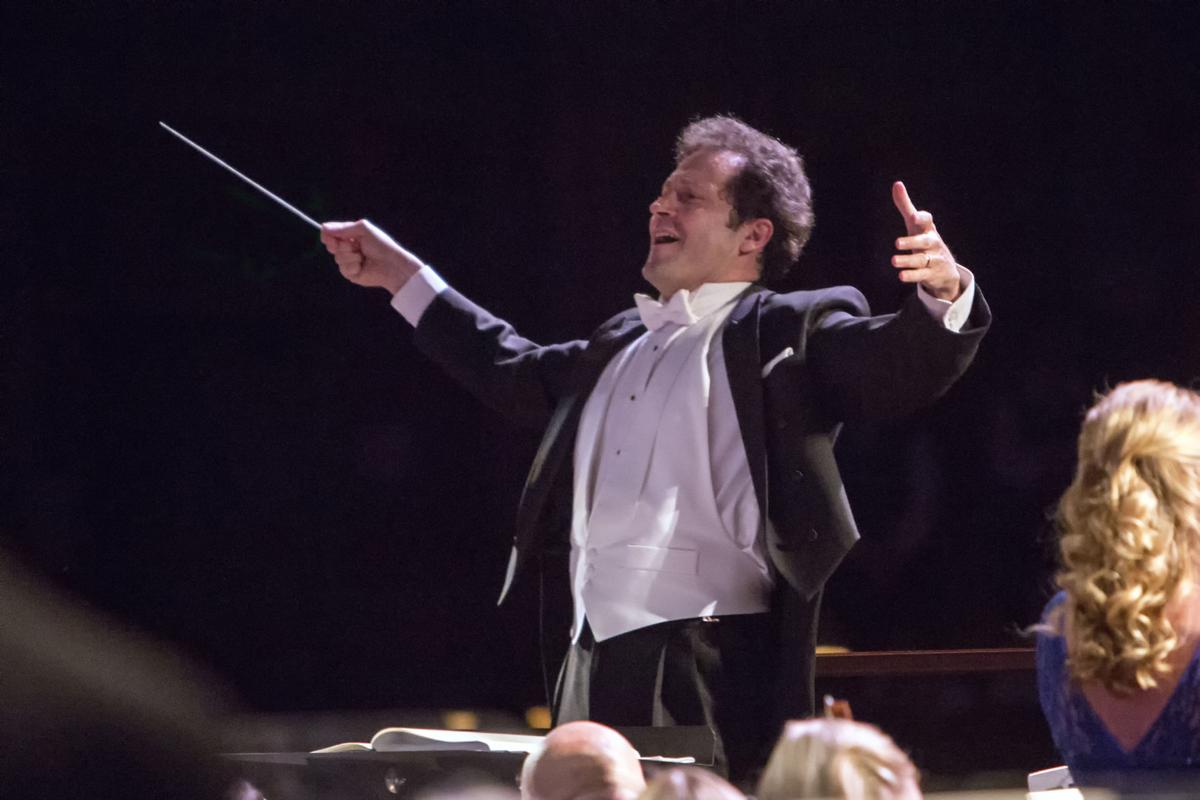 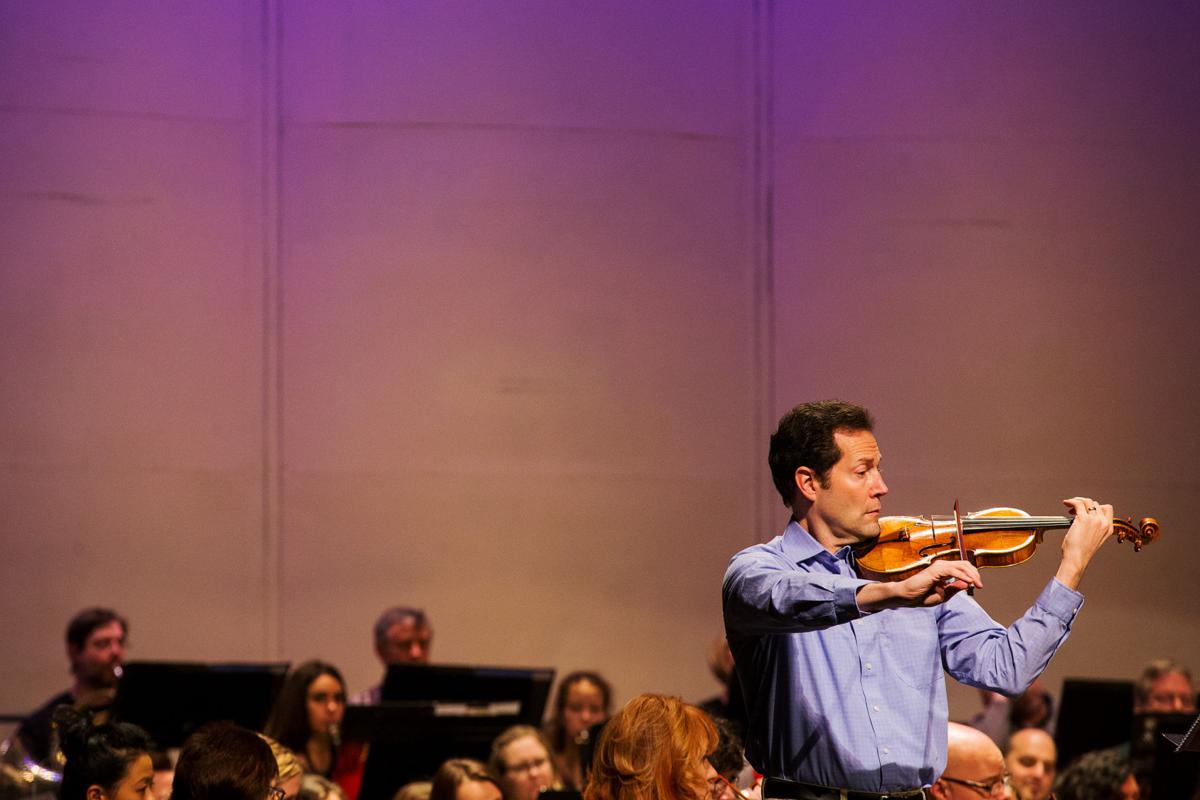 Lawrence Golan plays the violin during a recent rehearsal with the Yakima Symphony Orchestra at the Capital Theatre in Yakima, Wash., Saturday, Feb. 4, 2017. The next  "Lunch with Lawrence" will be at Zesta Cucina on Nov. 10. (SHAWN GUST/Yakima Herald-Republic) 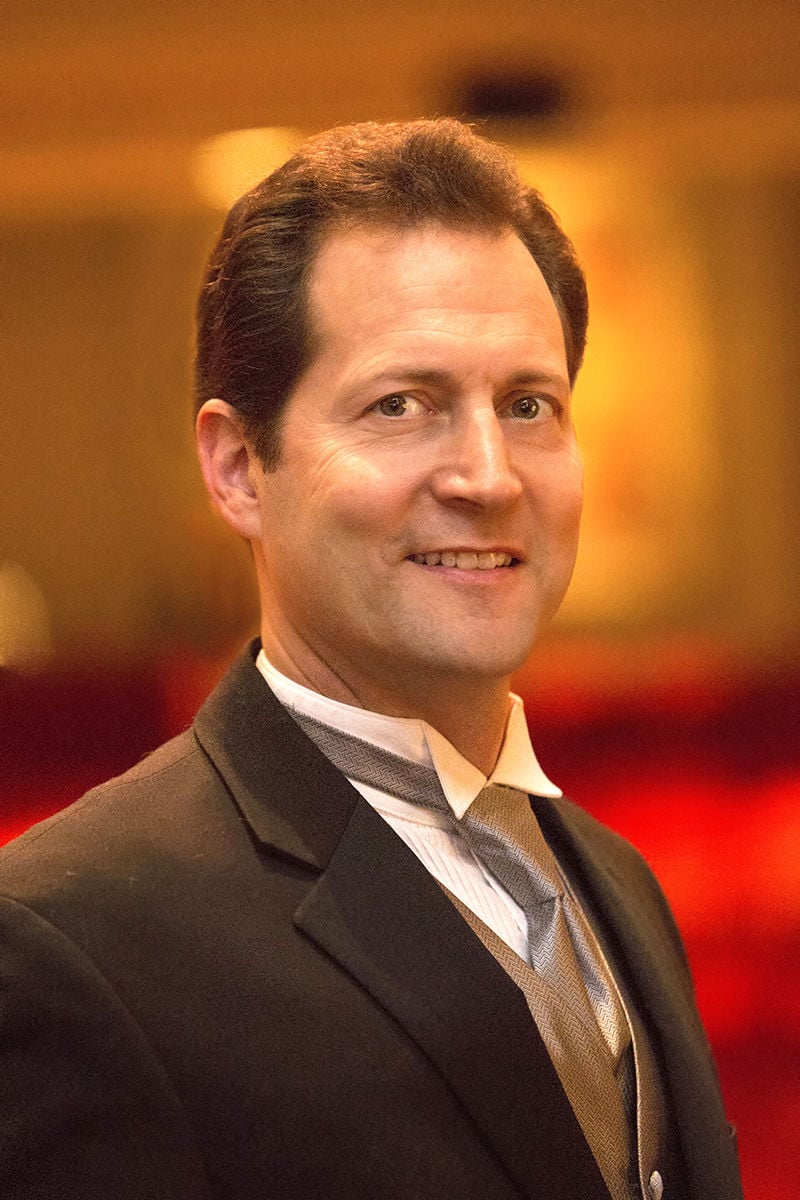 Lawrence Golan plays the violin during a recent rehearsal with the Yakima Symphony Orchestra at the Capital Theatre in Yakima, Wash., Saturday, Feb. 4, 2017. The next  "Lunch with Lawrence" will be at Zesta Cucina on Nov. 10. (SHAWN GUST/Yakima Herald-Republic)

He does it on a grand scale in The Capitol Theatre, where he’s conducted the Yakima Symphony Orchestra (YSO) for the past seven years, energizing audience members, which is no small feat considering he has his back to them most of the time.

(“Being there is an amazing experience, very thrilling and very beautiful,” says Aurora Peña-Torres, a symphony supporter.)

Even on a minor note, with just two or three people in a room, he exudes warmth.

Or, in a Yakima restaurant, mingling with several dozen symphony patrons, he engenders instant rapport.

(“He learns your name once and never forgets it,” says Becky Scholl, vice president of the symphony board.)

By all accounts, Golan has transformed the YSO into an inspired orchestra.

(“We’re so lucky to have him,” says Sonja Dodge, who served on the symphony board for 25 years.)

Yakima’s appreciation is evident: the concerts so far this season have either sold out or nearly so, while donations are at an all-time high. Meanwhile, Golan has increased the number of yearly performances from five to 11 by mixing pops concerts into the classical repertoire.

“We’re trying to be all-inclusive,” Golan explains, “designing a season of concerts that offers something for little children and parents through grandparents.”

Founding music director Brooke Creswell has nothing but praise for his successor. “It’s a much finer orchestra than it was seven or eight years ago.”

Snedeker, who has played French horn under Creswell and Golan and appreciates them both, knew the YSO had a dynamic candidate when Golan auditioned as conductor in 2010.

Golan, 50, has stayed true to that ethic by playing his violin for Yakima Valley Museum gatherings, working with young musicians, visiting schools and Children’s Village, appearing at wineries and Cottage in the Meadow.

“He reaches out to the community at all levels,” Dodge affirms.

Remembering how transformational his music instructors were when he was growing up in the Chicago area, Golan finds teaching exhilarating, whether to preschoolers or college students. His original mentor was Joseph Golan, his father and violinist with the Chicago Symphony Orchestra. That the younger Golan would follow in his father’s footsteps and become an accomplished violin player wasn’t always evident, however.

The youngster’s first career choice was to become a baseball player.

He was that athletically gifted?

“No, not really, but my father was good at baseball, and I wanted to be like him.”

It didn’t take long for Golan to turn to a different kind of pitch and embrace his father’s other talent: classical music.

Lawrence Golan had begun playing violin when he was 21/2, but, by his own admission, didn’t put much effort in until he was 13. He became increasingly more serious after a stint at Interlochen, a camp in Michigan for gifted young musicians. He went on to Indiana University, well known for its music program, where he earned bachelor’s and master’s degrees in conducting and violin performance. His doctor of musical arts is from the New England Conservatory of Music.

Always on the go

Tireless and focused, Golan is adept at balancing work across multiple platforms. In addition to serving as music director of the Yakima Symphony, he holds similar positions with the York, Penn., Symphony Orchestra, Denver Philharmonic and the Lamont Symphony Orchestra and Opera Theatre at the University of Denver.

In other words, when he’s finished with one concert, soon after there are three more.

Sometimes the performances are so close together that he gets slightly disoriented, after flying from city to city just days apart.

“I try very hard not to get mixed up, but I can get nervous about speaking to an audience.”

One night he was clearly mindful that he was in Yakima and not York, Penn., but even so, once on stage, he began with, “Welcome to York.”

But he caught himself and quickly added, “... Yakima Symphony.”

He got away with it because “People thought I said, ‘Welcome to YOUR Yakima Symphony.’”

He may live a peripatetic existence, but traveling from state to state has advantages, he points out. He has time to focus on classical scores while on airplanes, and there’s the added benefit of no phone calls or texts.

“The negative is being away from family,” he notes. “I always get home on Sunday night, and that’s my favorite night of the week, when I’m being accosted by my kids.”

He and his wife, Cecilia, live in Denver and have two children. What free time he has, he spends supine: lying on the carpet, he plays Legos and dolls with the kids. Daughter Giovanna, 6, is learning to play violin, while son Joseph, 3, is working on his British accent, which he’s picked up from a British children’s TV show, “Peppa Pig.”

He met Cecilia, who grew up in Argentina, after she had come to Denver to study in a college exchange program. She was about to move to Madrid, where her sister lived, but that all fell by the wayside as she and Golan became better acquainted.

“I ruined her plans,” he admits.

Golan’s time in Yakima is full: rehearsals, the actual concert and behind-the-scenes work developing the repertoire for next year’s programs.

He makes it a group effort, soliciting ideas for music from orchestra members, patrons, staff and youth symphony players. He then puts the suggestions together to come up with a yearly theme.

Choosing classical numbers can be win-win. Or not.

Realizing that he can’t please everyone, Golan tries to balance between beloved favorites and lesser-known pieces. He assumed Beethoven would always fall in the former category until an audience member answered a survey with, “Can’t you just do a season without Beethoven?”

Symphony players say the quality of music Golan chooses has been imaginative. Snedeker, who has played with the YSO for 26 years, notes, “He’s brought a fresh approach to programs and is a fine conductor. We all appreciate his challenging us.”

Unflappable, too. “I’ve played some difficult music that is famous for throwing conductors off, and he doesn’t get thrown off.”

Perhaps one of Golan’s most ardent admirers is Creswell, who conducted until his retirement in 2010.

When Golan was named the new conductor, Creswell was in the hospital, battling pneumonia. Even so, he dialed symphony board members from his hospital bed to congratulate them on their choice. “There was no question in my mind that Lawrence was the guy.”

A charter member of the symphony board and a “big fan”of Creswell, Dodge is also unabashedly enthusiastic about Golan’s tenure. “He has presence; he’s wonderful.”

Last month, Creswell came out of retirement for the evening to conduct as Golan turned the tables a bit and played a violin solo — on his father’s violin — along with Spokane’s Marshall on the cello for Brahms Double Concerto. Marshall notes, “I really admire that (Golan) can conduct and play on the same program; that’s very difficult, even physically.”

That admiration has developed over many years; Marshall and Golan were college roommates. They played in a trio together, toured Europe in the same orchestra and battled each other in pick-up basketball games.

Patron Peña-Torres agrees. Golan “brings a lot of life to the music.”

And a lot of juggling.

Not only does Golan lead four different orchestras, he tours internationally — 17 countries so far — has conducted in 26 different states and lived in Portland, Maine; Honolulu, Atlanta and Phoenix.

The thought of settling down in one area doesn’t hold much appeal to Golan even if it means he could whittle his eight sets of tuxedos and other formal evening wear, spread out over three states, down to one.

It may sound melodramatic, he admits, but “I feel like I’m a citizen of the world, and I like that.”

‘Die Fledermaus’ will bring the party to Yakima's Capitol Theatre

YAKIMA, Wash. -- In the real world, chambermaids are seen but not heard. In the opera world, they’re not only seen and heard, they’re usually …