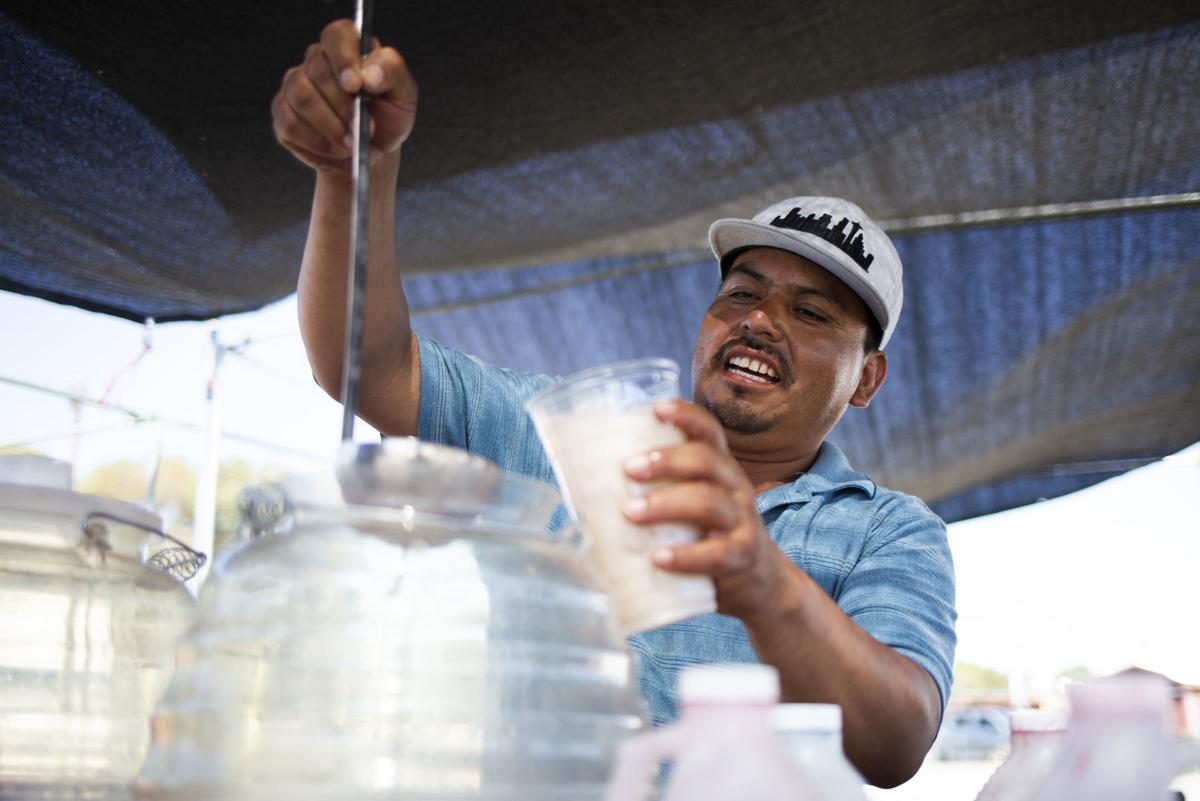 Abraham Temaj serves horchata to a customer Aug. 31 at the Toppenish Flea Market. Below right, he makes tacos. 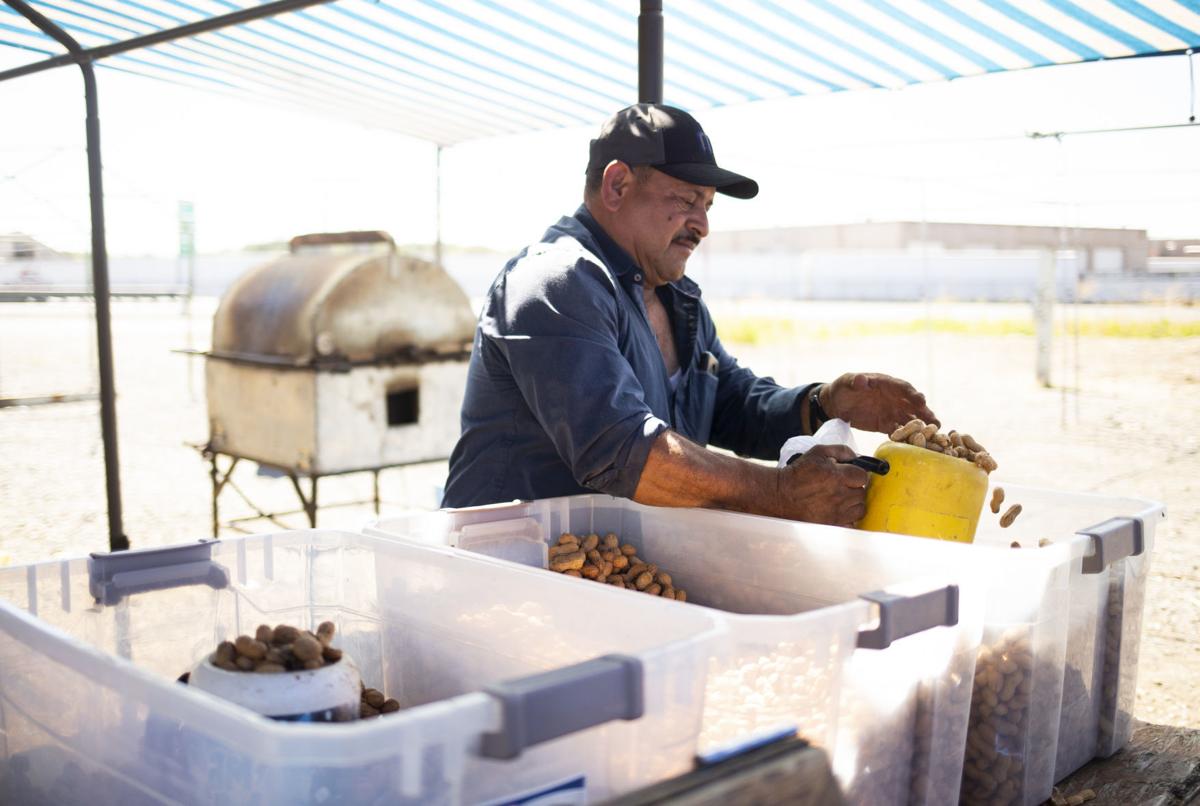 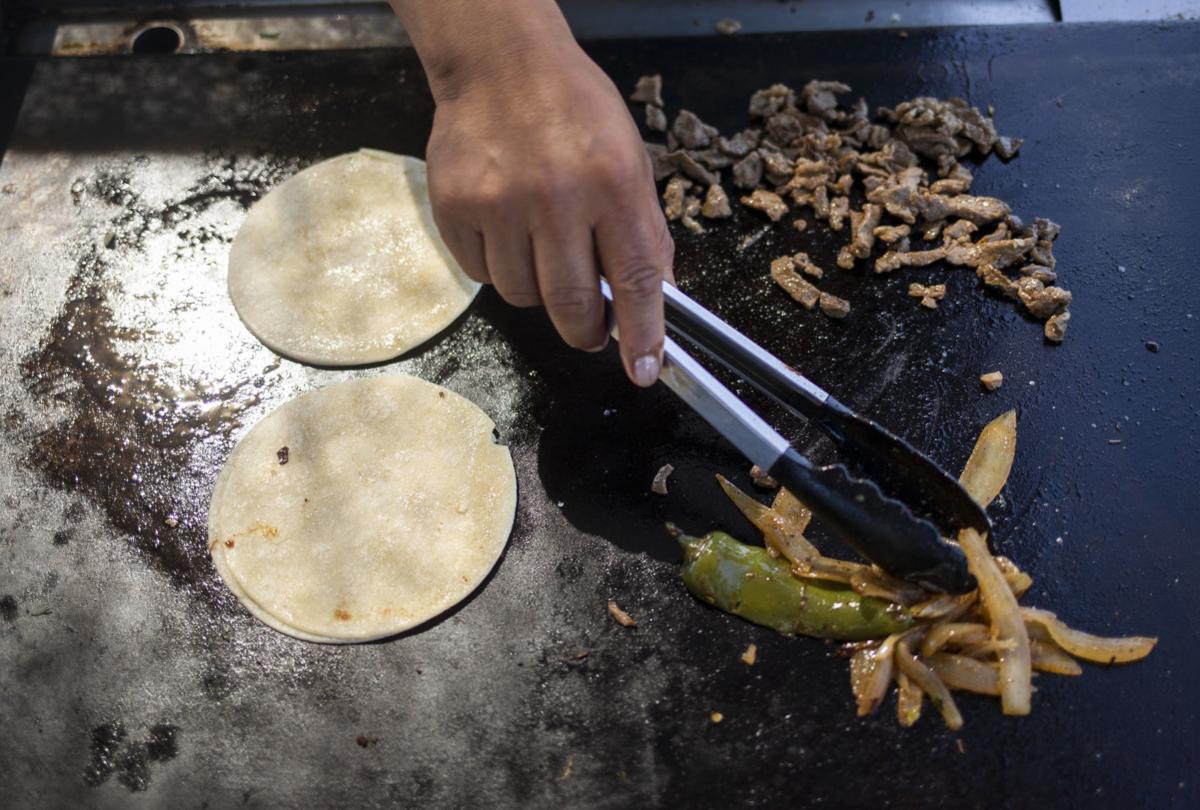 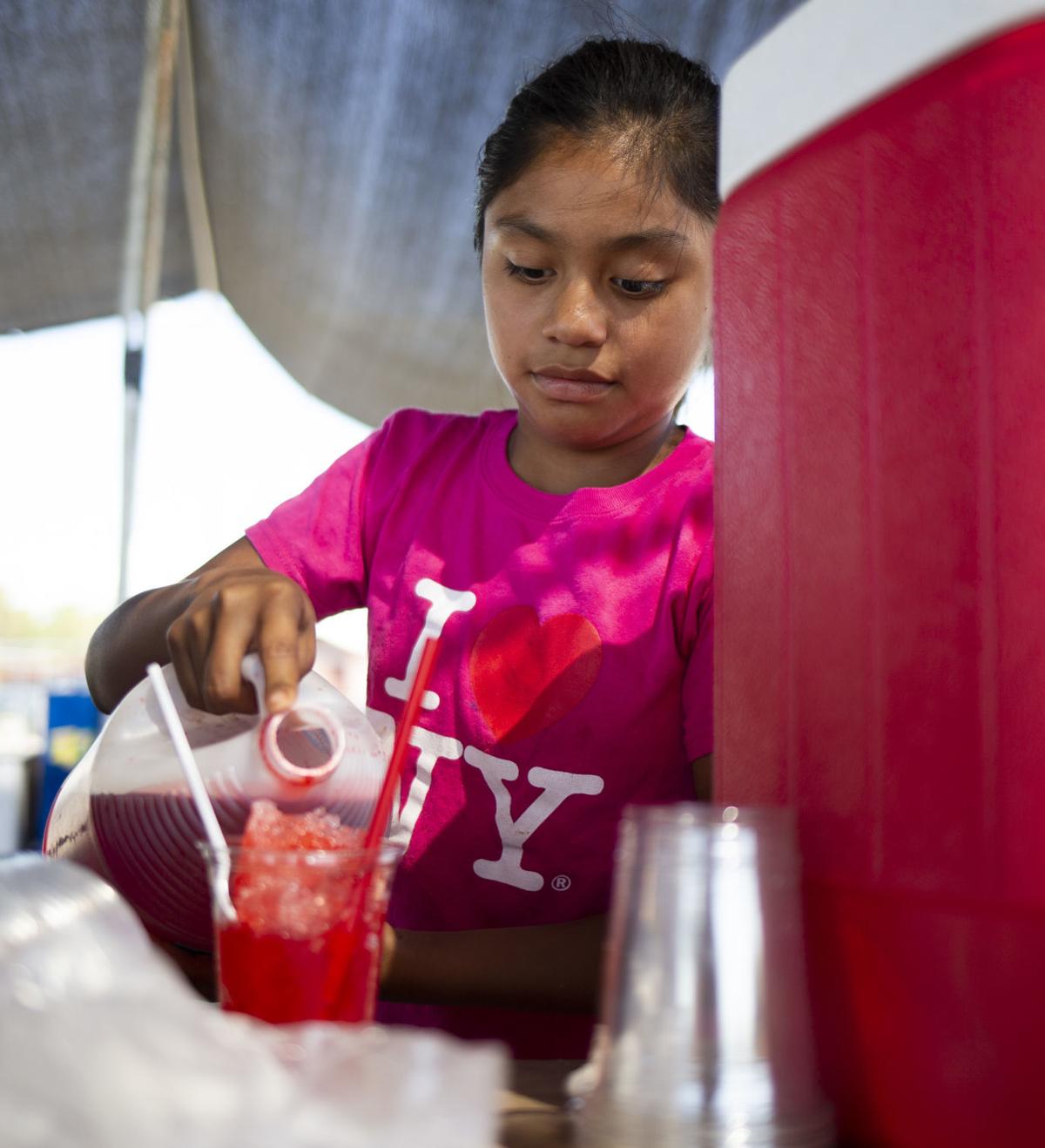 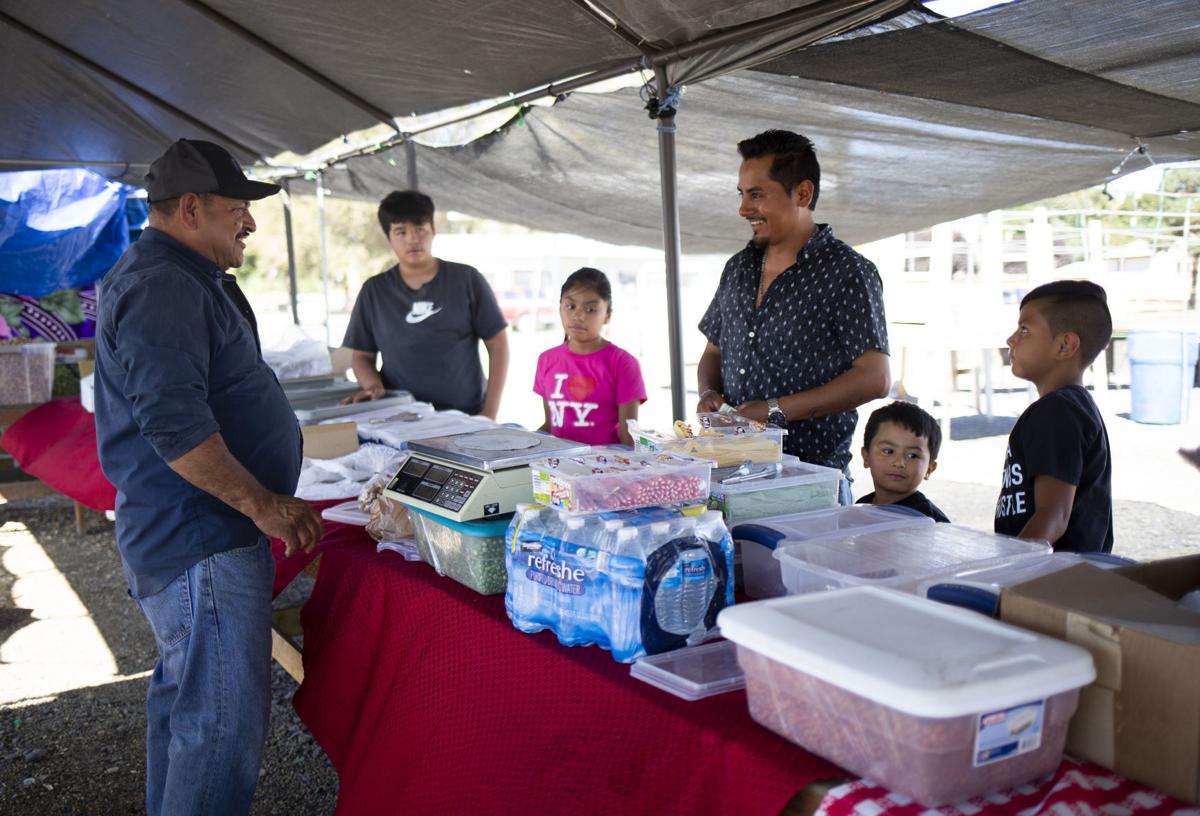 Abraham Temaj serves horchata to a customer Aug. 31 at the Toppenish Flea Market. Below right, he makes tacos.

On weekdays, the dusty lot at the corner of U.S. Highway 97 and Toppenish’s West First Avenue looks like a forest of aluminum poles.

The market attracts bargain hunters, people seeking a taste of home and vendors looking to make some extra money to support their families.

“It’s a little calm on Saturdays, but Sundays are really busy,” said Guadalupe Diaz of Toppenish, who runs a roasted nut stand in the market.

The market runs every weekend year-round, vendors say. In late June and early July, however, fireworks sales dominate the market.

While there are lulls in activity, especially when other events such as fairs compete for attention, vendors say they get enough business to keep them coming back every weekend.

Diaz, who runs the nut booth with help from Ismael Espinoza, said he got started there eight years ago after working at another nut stand. One Saturday morning, he was busy at a grill roasting peanuts in their shells, while Espinoza was roasting and bagging green garbanzos for the few customers who were filtering by.

Nearby, Abraham Demag and his young daughter, Yuliza, were working on beef and pork tacos at the stand named for his daughter, Tacos Yuliza. It’s a business he’s been running at the market for the past five years, supplementing his income as a farm worker.

Vanessa Sanchez has been coming down since 2016 to sell wide-brimmed hats and blankets from a booth and truck near the road. She’s seen people come from as far as Seattle to shop at hers and other vendors’ booths.

It also helps that it is only regular flea market in the Valley, Sanchez said.

“We’re the ones who stick around,” Sanchez said.

The market is located just outside Toppenish on Yakama Nation land, and the owner, a Yakama Nation citizen, comes by every day it is open to collect the $20-$30 rent for each booth. Vendors say their interaction with her is limited.

The booth locations, marked off by aluminum poles on which tarps, blankets and other things can be hung to create walls, measure about 10 by 10 feet. Some vendors, like Demag and Diaz, take up two.

Demag and other vendors say they have developed a following with customers who come back regularly.

Cesar Hernandez of Moxee sells shoes Saturdays and Sundays. Sundays are the busier and better days for selling, Hernandez says. But “there are customers that come on Saturdays” because it’s their day off.

“Sundays are big, you can see many people and vendors here,” he said. “You can find good prices that you won’t find anywhere else. There are also many antojitos (Mexican dishes).”

Markets are a family business for Hernandez. His parents have been selling for 20 years in California, and Hernandez learned many skills from them.

Markets are a tradition not only for his family, but also for many families in the Yakima Valley that are from Mexico, he says. People from Mexico “are used to buying at the tianguis (open air markets in Central Mexico).”

During the week, he works in construction or in the fields, and during the weekends he joins the rest of the vendors at the flea market as an extra job.

His daughter Madeleine, 9, helps him during the weekends. Last weekend, she was making raspados, or Mexican shaved ice.

Temaj also sells Guatemalan tamales folded in banana leaves early morning on the weekends. He is from Guatemala and he likes to share part of his culinary heritage with his customers, and the Mexican dishes he learned to cook in California a few years ago.

Temaj doesn’t just sell in Toppenish. He and his family sell their products at Martin Luther King Park and Miller Park in Yakima. For them, selling at the market and at the parks is their main source of income.

Monse Ramirez, 18, loves to eat chapulines (chili-lime crickets from Mexico). She likes this crunchy dish and goes to the flea market every week to buy them. “I can’t find them anywhere else,” she says. Mexican candies also bring her to the market.

Ramirez, a Toppenish resident, loves the market environment and the memories it brings from her childhood.

“It reminds me of when I went with my mom (to the market in Mexico). She sold clothes. It’s something similar,” she says. Ramirez worked for three years with one of her uncles at the flea market. “People are selling many products, drinks, food and there is a lot of music,” she says.

Gabriel Villa of Selah was holding a plastic bag full of colorful pistachios in six flavors.

He goes at the market once a month to buy pistachios, elotes, and candy for his children, he says. “It’s easier to find them here and the prices are good,” he says.

Ramirez and Villa were buying at Diaz’s market stall. Diaz has been selling a variety of candies, the popular toasted peanuts, grains and chapulines at the flea market for eight years.

Every Saturday and Sunday people can find Diaz there, even in the winter. “I don’t stop, even in the snow, because people buy peanuts to eat them while they are watching movies.”