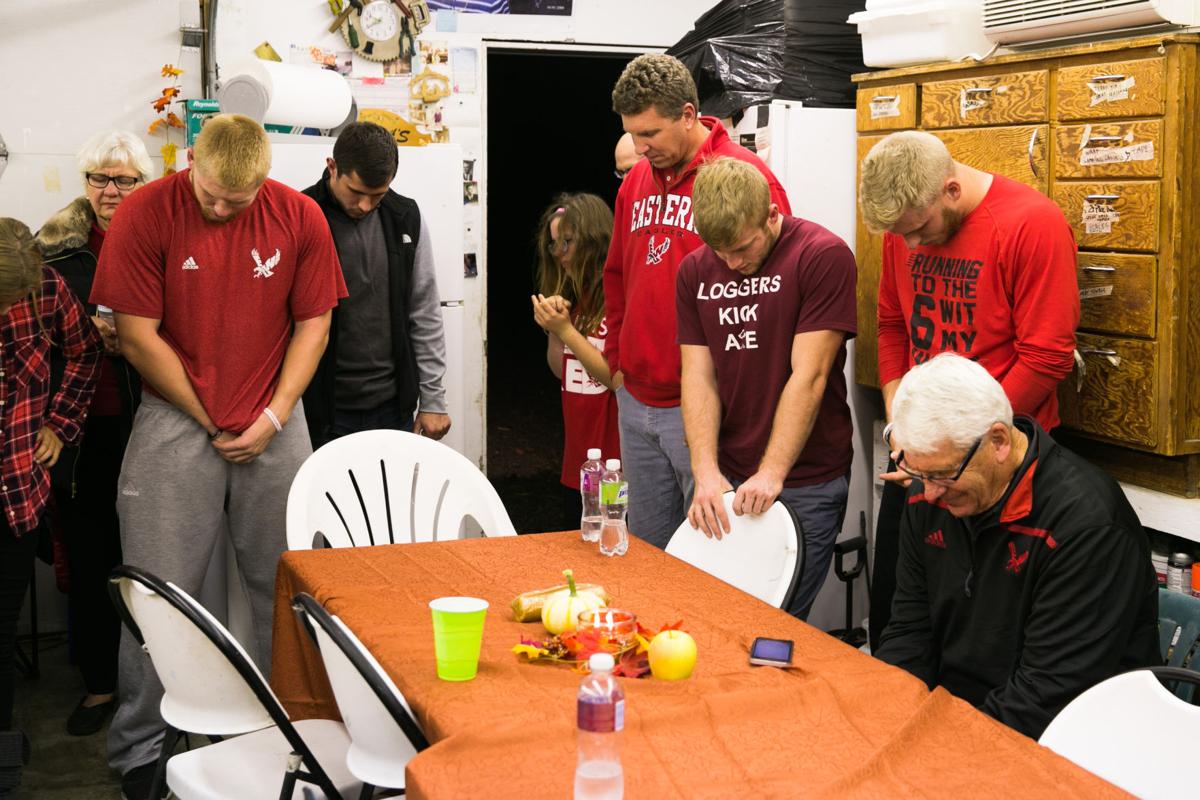 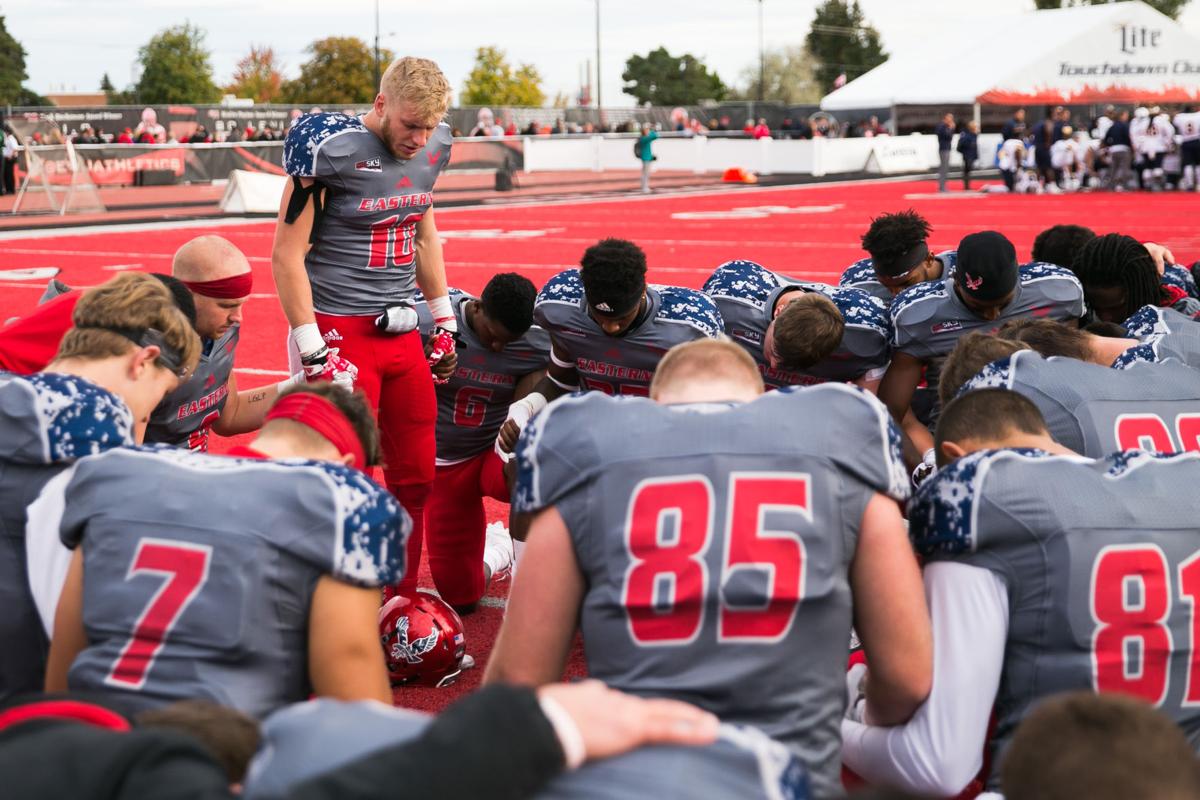 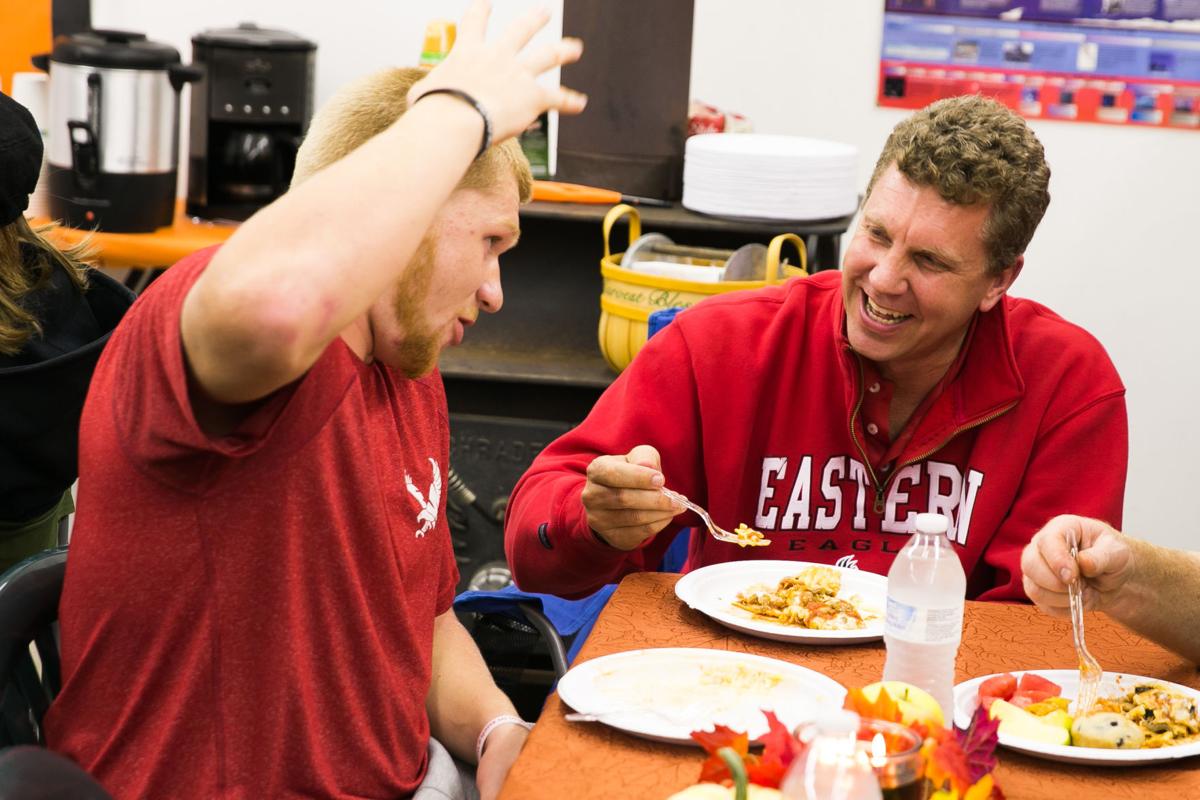 Ketner Kupp shares a memory with his day Craig Kupp at the Mason's residence near Cheney, Wash. on Saturday, October 8, 2016. (MASON TRINCA/Yakima Herald-Republic) 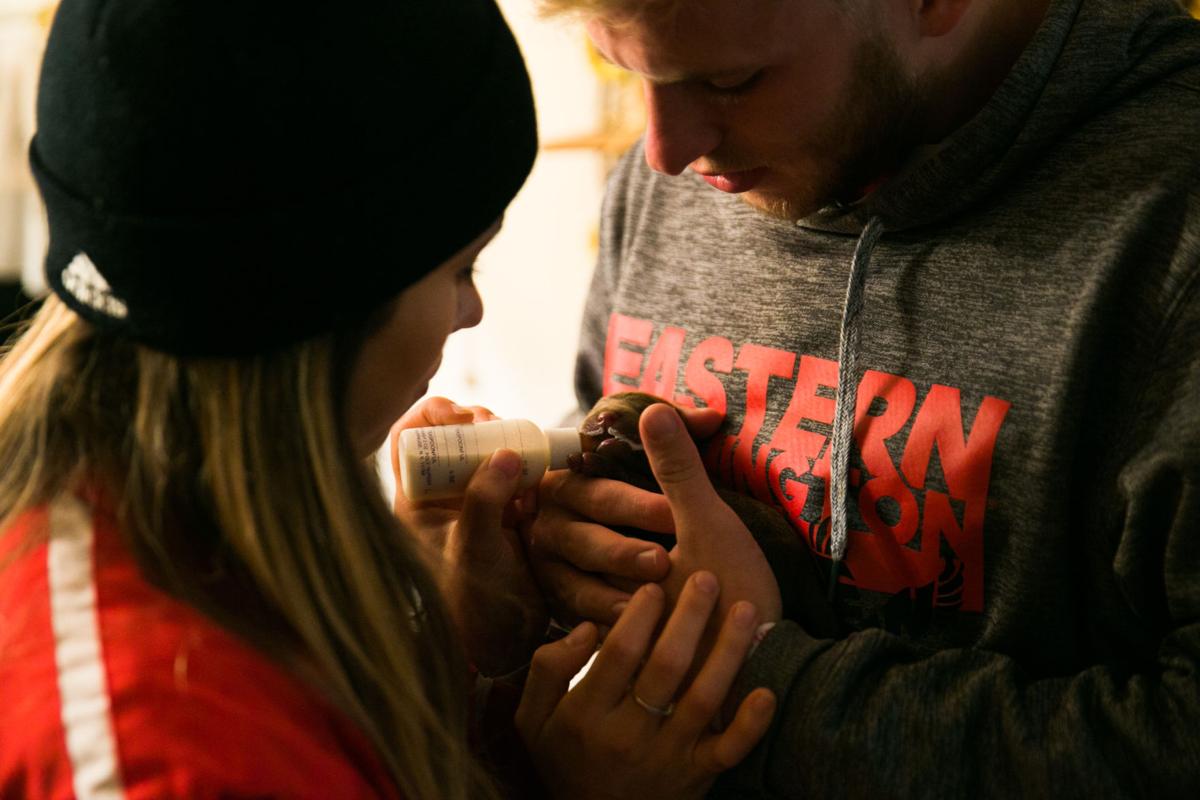 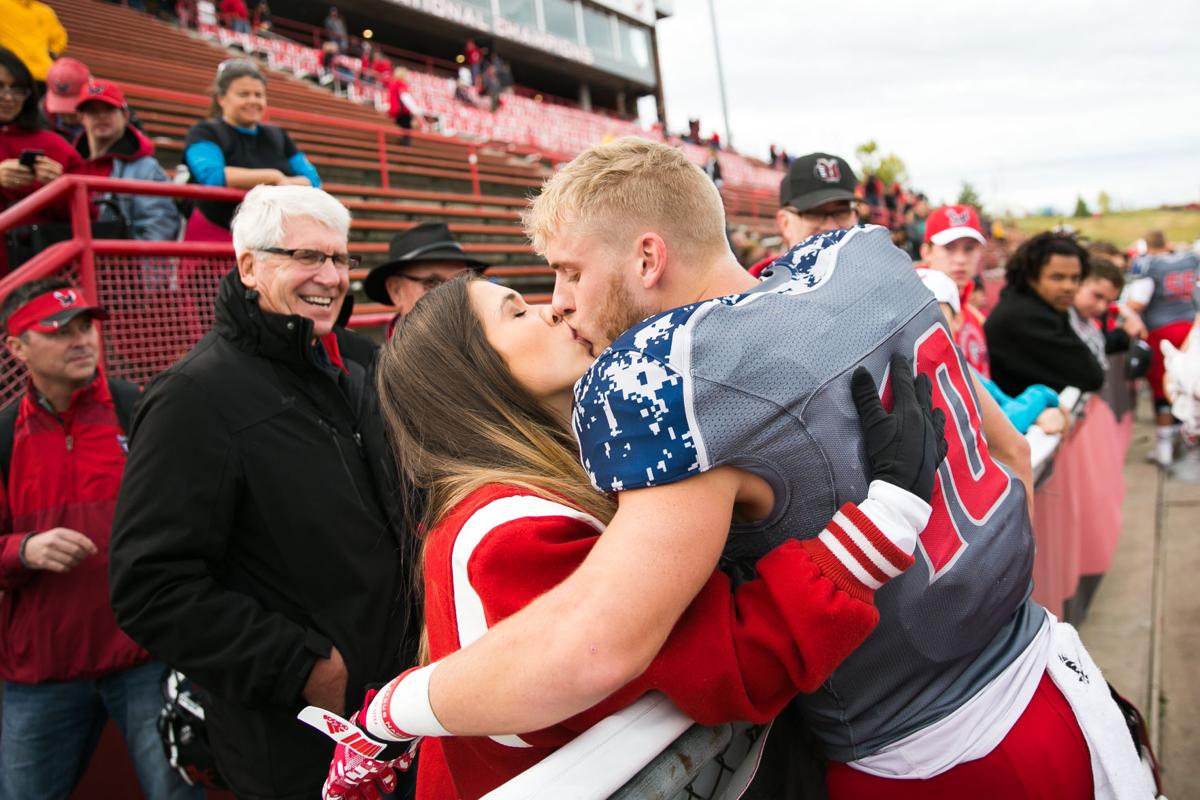 Cooper Kupp gives his wife, Anna Croskey, a kiss after the end of the Northern Colorado matchup at Roos Field on Saturday, October 8, 2016. (MASON TRINCA/Yakima Herald-Republic) 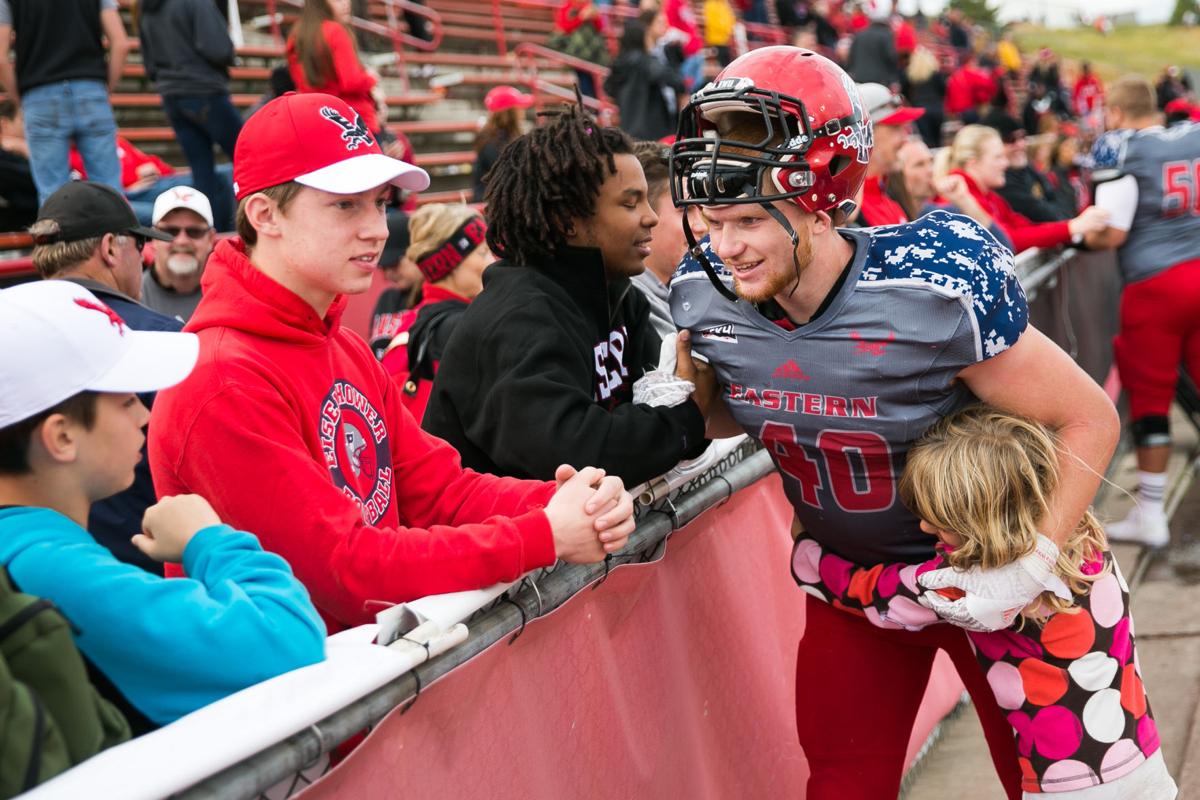 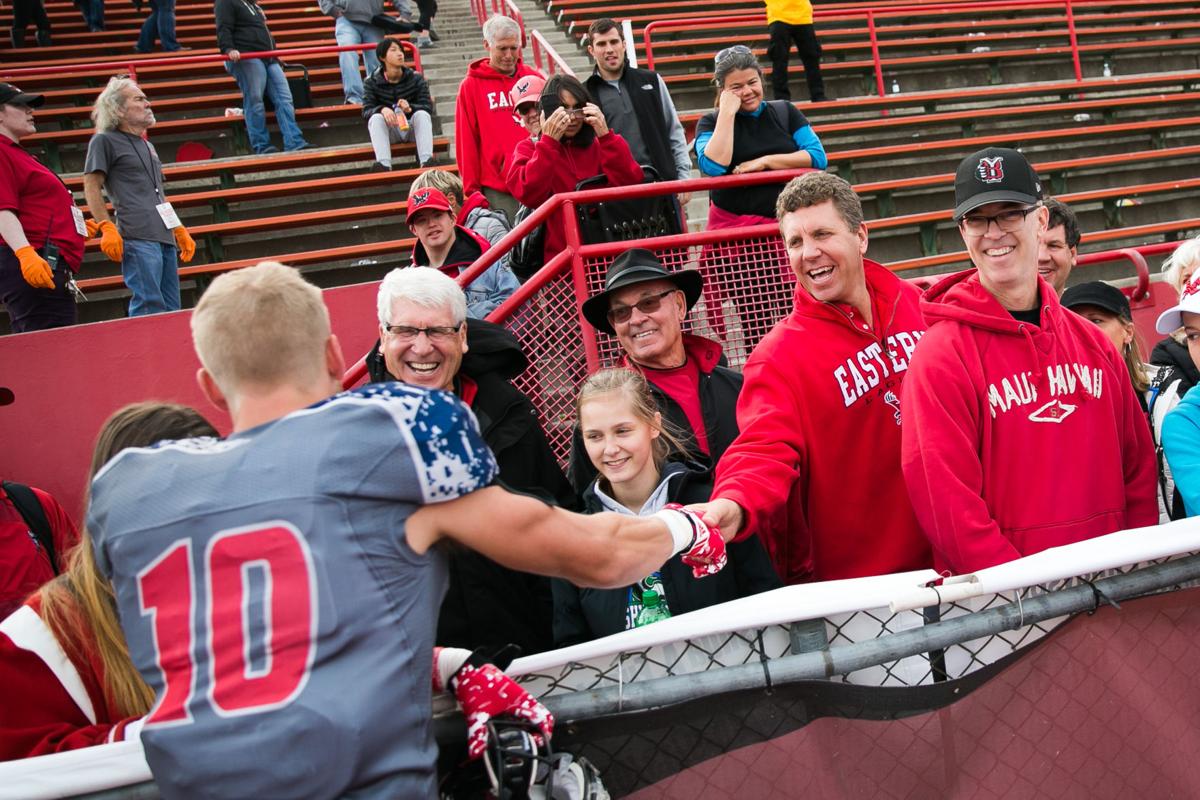 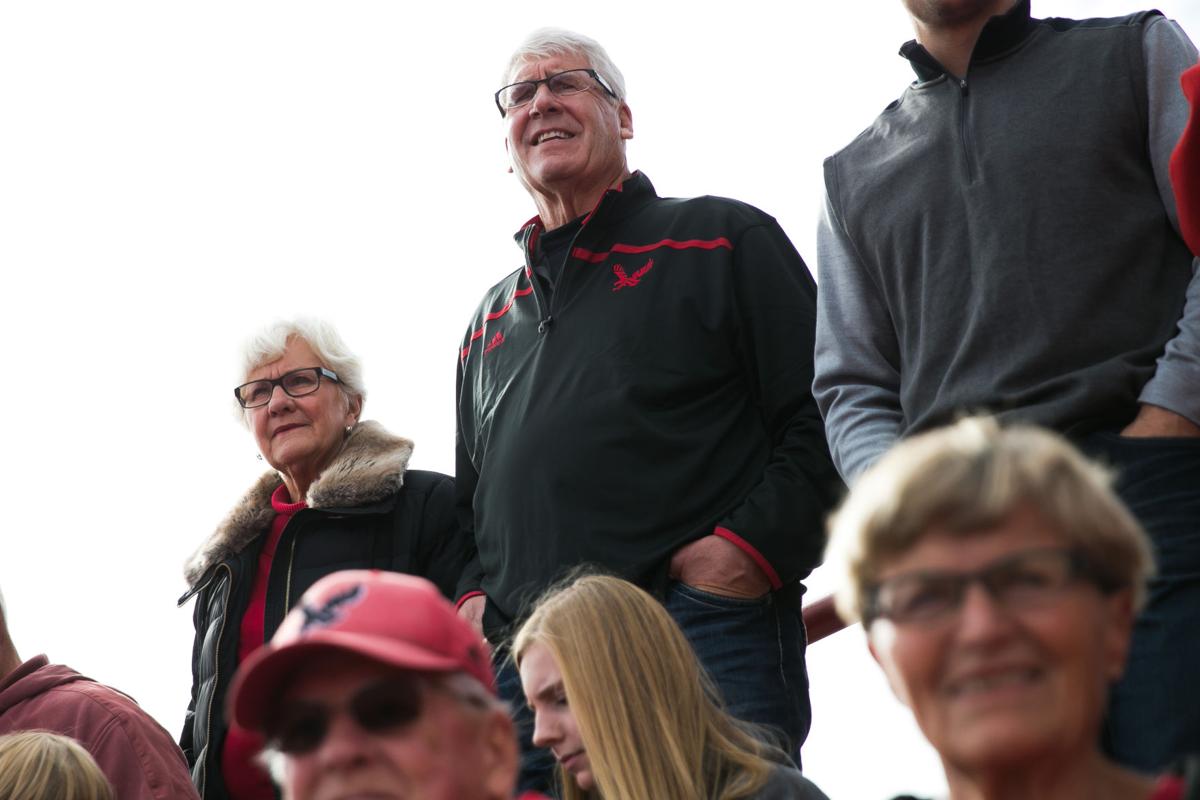 Carla Kupp and Jake Kupp watch the kick off of the Eastern Washington football game against the Northern Colorado Bears at Roos Field on Saturday, October 8, 2016. (MASON TRINCA/Yakima Herald-Republic) 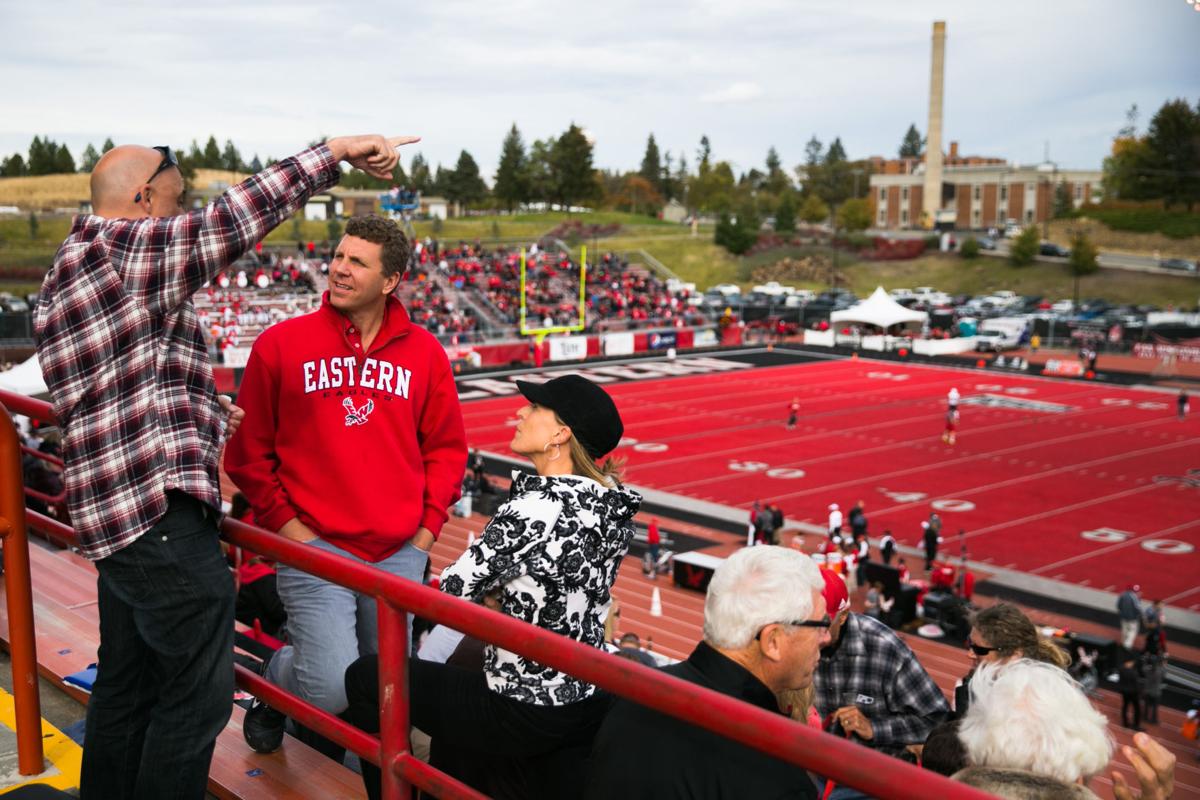 Craig Kupp and Karin Kupp talks to friends and family during the halftime of the Northern Colorado Bears at Roos Field on Saturday, October 8, 2016. (MASON TRINCA/Yakima Herald-Republic)

Ketner Kupp shares a memory with his day Craig Kupp at the Mason's residence near Cheney, Wash. on Saturday, October 8, 2016. (MASON TRINCA/Yakima Herald-Republic)

Cooper Kupp gives his wife, Anna Croskey, a kiss after the end of the Northern Colorado matchup at Roos Field on Saturday, October 8, 2016. (MASON TRINCA/Yakima Herald-Republic)

Carla Kupp and Jake Kupp watch the kick off of the Eastern Washington football game against the Northern Colorado Bears at Roos Field on Saturday, October 8, 2016. (MASON TRINCA/Yakima Herald-Republic)

Craig Kupp and Karin Kupp talks to friends and family during the halftime of the Northern Colorado Bears at Roos Field on Saturday, October 8, 2016. (MASON TRINCA/Yakima Herald-Republic)

Faith, family, football — they’ve been inextricably entwined through several generations of the Kupps of Yakima.

And this is the season where all three of those mainstays are in play, both quietly and dramatically.

The family is led by grandparents Jake and Carla Kupp. Jake is well-known as a former lineman with the New Orleans Saints professional football team; Carla has been by his side throughout his career, beginning when they were students at Sunnyside High School.

Their son, Craig, played quarterback at Pacific Lutheran University and, professionally, for the Arizona Cardinals and Dallas Cowboys. He and his wife, Karin, met in college, where she played soccer, and both participated in team Bible study groups.

And now there is Cooper, the oldest of Craig and Karin’s four children, a senior receiver at Eastern Washington University, almost certainly heading to the pros. Following closely behind is younger brother Ketner, a sophomore linebacker on the same team.

What binds the Kupps together, through life’s joys and trials, is devotion to each other, love for athletics and, above all, their faith in God.

“It’s part of who we are,” Craig explains. “Our relationship with Jesus is the center of our life.”

Adds Jake, “You have to rely on a strength greater than yourself.”

The impact religion has had on their athletic careers was especially apparent when Jake was playing professional football. “A lot of players didn’t have faith, but for me football was such a challenge, faith was really part of what I did.”

It carried him through good times and not so good.

Jake poignantly remembers a block he missed during a game years ago, which allowed his opponent to snare a pass and score a touchdown, which caused the Saints to lose the game.

“I went home and relived that play in my mind, and the only way I could get rid of it was to know that God accepts me as a person, not as a performer,” he explains. “It’s not what I do that’s important, it’s my relationship with God.”

Focussing on that tenet allowed him to shake off the negative and prepare for the next game. “Exercising these gifts for God’s pleasure gave me more meaning and fulfillment,” Jake says.

For Craig, it was important to trust the other players and know the feeling was reciprocal. “Perfect love comes from God, casts out all fear and extends to your teammates,“ he notes.

He agrees with his father that God played an integral role in how he viewed his own performance on the field.

“There’s total release in using talents God gave you as a way to worship Him,” Craig explains. “If you take the element of worship out of it, it’s much less satisfying.”

When Cooper was about to head off for his freshman year in college, he decided to be baptized first. “He wanted to make a statement to God about his commitment,” his grandmother recalls. Craig and Dave Edler, pastor of Yakima Foursquare Church, baptized him together.

Then, when Cooper was mulling if he should return to Eastern to play a final year of college football, he and his wife, Anna, fasted and prayed for guidance.

“Cooper is so sure of where he is,” says his mother. “When I was his age, my identity was wrapped up more in performance. He wants to do well, but as much as he loves football, it doesn’t define him.”

Both Karin and Carla report that it’s different watching a boyfriend or spouse play than it is a son. “You worry a little more when your sons play,” Carla affirms.

So true, notes Jake. “We laugh about this a lot, but I never heard Carla express fear or trepidation that I’d get hurt. When our sons started playing, that changed dramatically. And now it’s the grandchildren.”

Jake and Carla are active volunteers in Grace of Christ Presbyterian Church. He’s part of a leadership team and is helping develop the Gracia de Cristo Hispanic ministry, while she’s a reading mentor for Adams Elementary School pupils. “It’s not so much teaching as loving and connecting with the kids,” she points out.

Connecting with God, as well as people, is paramount, the Kupps believe.

Jake and Carla say their greatest challenge in life was losing their 39-year-old son, Kyle, to brain cancer in 2008. (They also have another son, Randy.) “Without our faith, I don’t know how we would have been able to get through it,” Jake says.

“It didn’t diminish our faith,” adds Carla. “We learned from the Bible about eternal things, not day-to-day ones. We spent five years walking alongside him; we knew where he was going, and we could let go.”

Craig points out that the family’s staunch belief not only has comforted them through times of profound sadness but also has guided them in extending grace toward others as well as themselves. Karin agrees: “When you do stumble, and we have several times, you see you’re not perfect, but you still have hope.”

Because faith is their anchor, the family is blessed, the Kupps say.

Jake explains, “It’s exciting to see how Christ brings us together, our family and extended family, and forms a special bond.”

IRVINE, Calif. – Cooper Kupp’s dreams are bigger now, and so is the stage.

As Craig Kupp sometimes struggles to identify his first recollection of football, he smiles.