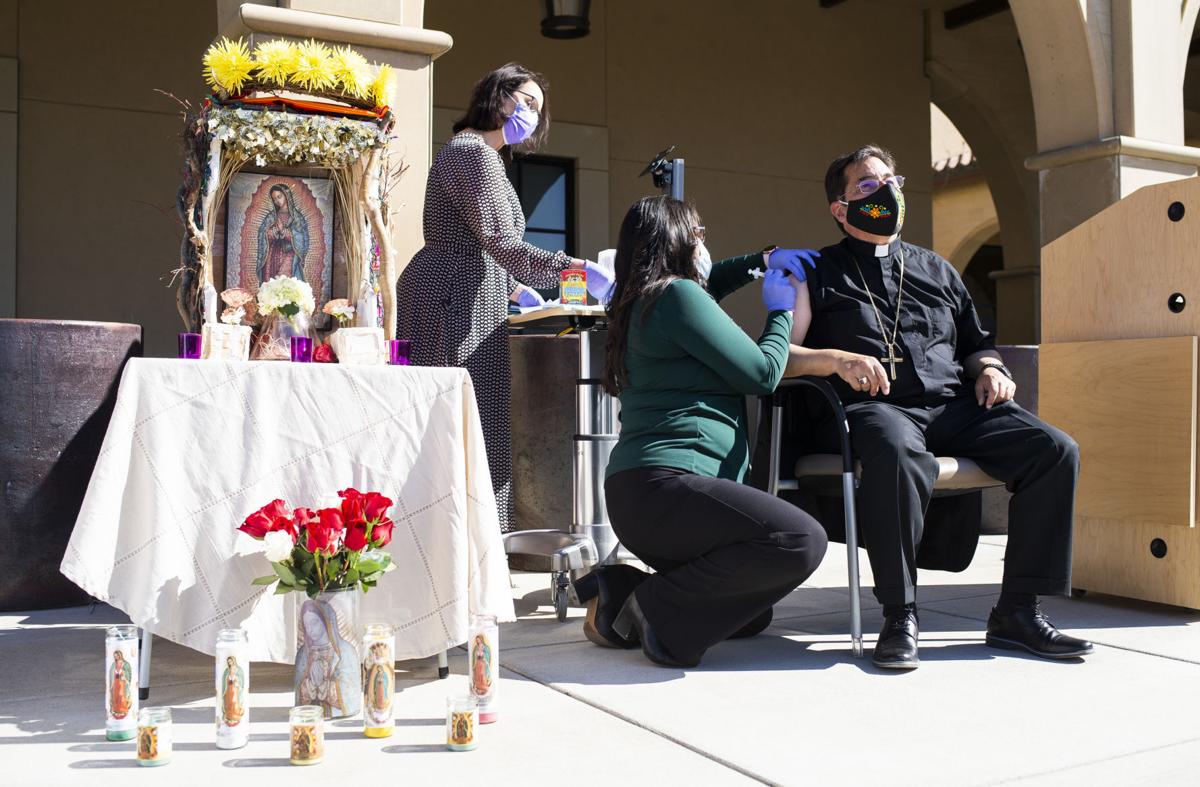 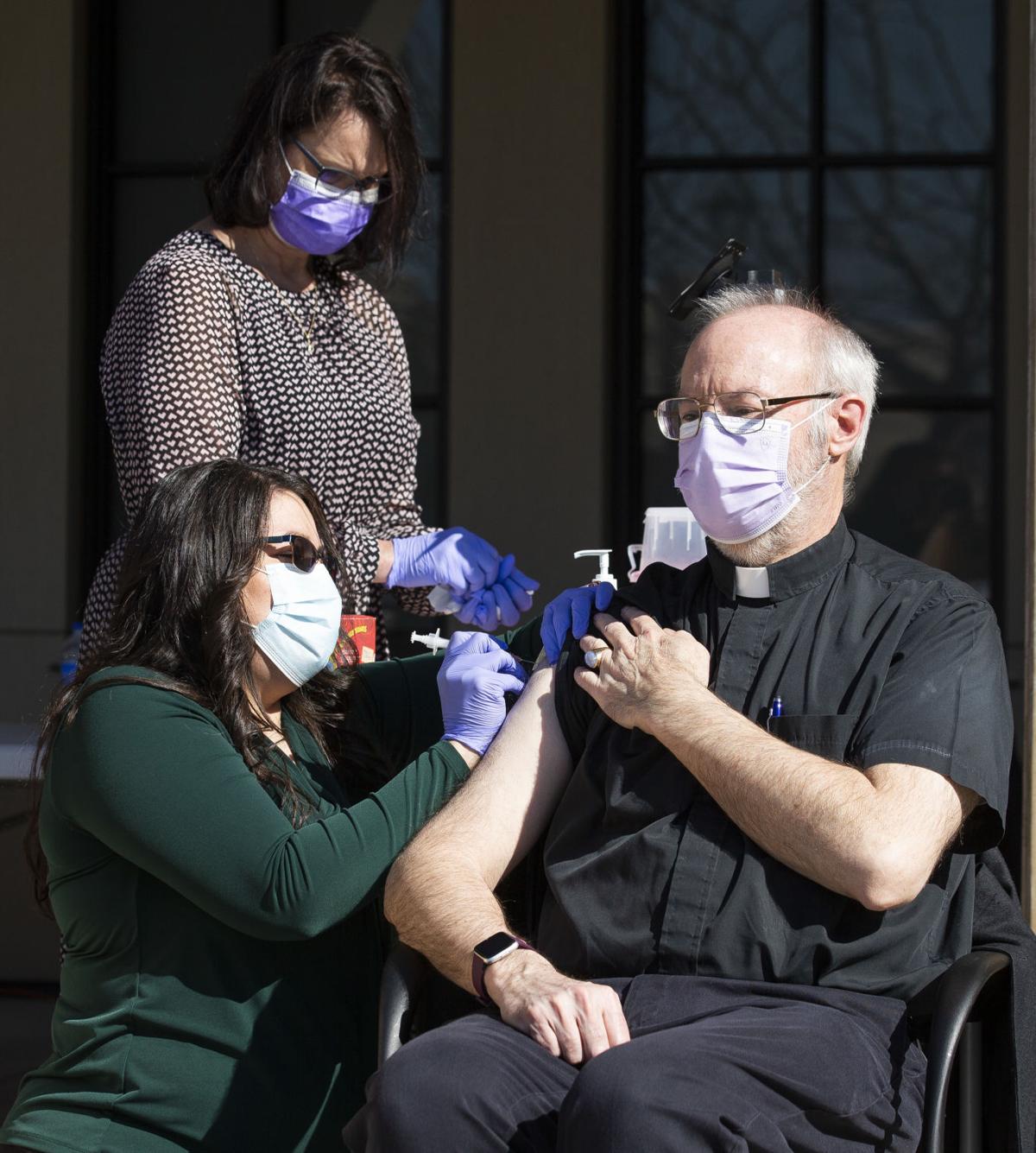 The bishop of the Catholic Diocese of Yakima stood in a courtyard at Yakima Valley Farm Workers Clinic on Thursday — a year after COVID-19’s arrival in Yakima County was confirmed — and prayed for his congregation as members joined virtually.

He prayed for protection of the congregation against the virus, courage for each member to get a COVID-19 vaccine, safety for those administering and transporting them, and inspiration for medical researchers to “provide new cures that respect the life of the unborn.”

Then, Bishop Joseph Tyson rolled up his sleeve and received a Johnson & Johnson COVID-19 vaccine — a single-dose vaccination that has received pushback from some because of its development.

“There are many opinions around the vaccine,” Tyson said in Spanish during comments after his prayer. “But it’s acceptable. It’s permissible to receive the vaccine, especially in this time of the COVID-19 pandemic. My message is very simple: It’s not a sin.”

The local Hispanic or Latino community has been disproportionately impacted by COVID-19, said both Tyson and Carlos Olivares, CEO of the Yakima Valley Farm Workers Clinic — making it important for this community in particular to get vaccinated against the illness.

Of the 26,717 cases of COVID-19 in Yakima County reported as of Feb. 26, 45.3% were among Hispanic or Latino community members, according to the Yakima Health District.

Members of the Catholic Church have expressed uncertainty about whether it was moral to get vaccinated against COVID-19, since stems cells from aborted fetuses were used in testing and developing some of the vaccines, said Tyson.

The Johnson & Johnson vaccine that he received, for example, used these stem cells in the development of the vaccine itself.

While he said he couldn’t condone or ignore this, he said the good outweighed the bad, in this case. Tyson urged community members to get whichever vaccine is available to them as soon as they are eligible. He also called on community members to request that pharmaceutical companies create future treatments and cures using what he called “clean stem cells.”

He said the use of aborted fetus stem cells in medical treatment development or testing was more common than most people realized — including many common over-the-counter medications. Rather than stop using these, he said this could be an opportunity to call on change from the medical industry moving forward.

In addition to concerns about fetal tissue, misinformation about the safety of the three COVID-19 vaccines available in the U.S. has been spreading online, said Olivares. It has been particularly targeted toward Spanish speakers, he said.

“All the way from, ‘Your DNA is going to be messed up to — you name it,’” he said, adding that the information is false.

The vaccines approved are not only safe but crucial to future community health, he said — especially that of the Hispanic or Latino community so deeply impacted by the virus due to factors front-line jobs and multi-generational households.

“We need to get it because we have been disproportionately affected by this pandemic as a community, and the only reason why we can get ahead of it is by creating structure and trust and understanding," Olivares said.

Tyson said among those impacted was the Rev. Alejandro “Alex” Trejo, pastor of Our Lady of the Desert Parish in Mattawa, who was believed to be the first Catholic priest in the U.S. to have tested positive for COVID-19 in March 2020. In January, Tyson added, he attended a virtual funeral for a nun in the Yakima Diocese.

“Our bodies are … of God,” he said. “I am not afraid of receiving this vaccine.”

“What we are doing today is to end the pandemic,” he told viewers, citing a near return to normalcy, where schools, churches and community events can be held without concern. "I have no fear of the vaccine.”

As of Monday, the state reported 59,850 vaccine doses had been given in Yakima County. On March 22, agriculture and grocery workers will be added to the list of individuals eligible for vaccines.

Olivares said Yakima Valley Farm Workers Clinic was expecting to administer 10,000 to 20,000 vaccine doses to migrant workers in coming months. It is also partnering with local agriculture companies to coordinate employees vaccination either at the clinic or at warehouses and fields, he said.

“We’ve got to do this collectively,” he said of vaccine distribution in Yakima Valley. That includes partnering with the Yakima Health District, the Diocese, local companies and more, said Olivares.

Lori Kelley, the organization’s senior director of quality, echoed him.

“There’s finally hope that we can turn this pandemic around,” she said.

On Easter Sunday, churches in Yakima County are still struggling with loss of all kinds as the COVID-19 pandemic continues. But faith leaders will stress the timeless Easter message of hope today, with hope for the future beyond the pandemic.