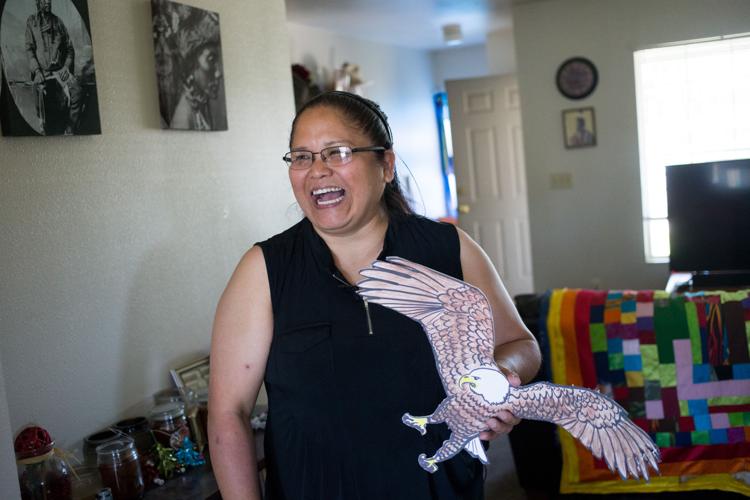 HollyAnna CougarTracks DeCoteau Littlebull holds a cutout of a character that will be in her new Sahaptin comic book at her home in Yakima, Wash., Friday, July 8, 2016. Littlebull received a grant to write and illustrate the book that helps teach the language. (SOFIA JARAMILLO/Yakima Herald-Republic) 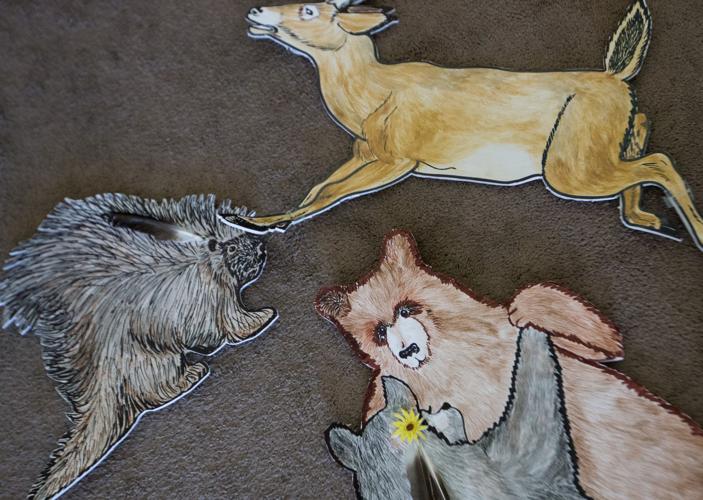 HollyAnna CougarTracks DeCoteau Littlebull holds a cutout of a character that will be in her new Sahaptin comic book at her home in Yakima, Wash., Friday, July 8, 2016. Littlebull received a grant to write and illustrate the book that helps teach the language. (SOFIA JARAMILLO/Yakima Herald-Republic)

When she teaches Sahaptin, HollyAnna CougarTracks DeCoteau Littlebull often holds a stuffed animal to illustrate her lessons. When she talks about Bigfoot, she holds two.

“It’s so much fun. You can hear them all the way down the hall,” said Littlebull, who teaches the Yakama dialect of Sahaptin (Ichishkíin), the language of the Confederated Tribes and Bands of the Yakama Nation.

“I’m probably going to have enough for a dozen books,” said Littlebull, who’s also writing and illustrating a graphic novel and a related animated cartoon, both completely in Sahaptin.

Her varied efforts to teach Sahaptin are critically important, not only to those who want to keep speaking it, but also in sustaining the language’s vitality. Ethnologue: Languages of the World (www.ethnologue.com), a comprehensive reference work cataloging the world’s known living languages, considers Sahaptin “nearly extinct.”

Only two rankings are lower: dormant and extinct.

Others like Littlebull are working to keep Sahaptin alive. Heritage University in 2014 created the Heritage University Language Center to preserve, revitalize and promote the Sahaptin language under the direction of Greg (Tuwalatin) Sutterlict. His outreach involves students ranging in age from preschool to high school, college students and adults.

And at the University of Oregon, renowned Yakama linguist and activist Virginia (Tuxamshish) Beavert — who speaks six Native languages — has taught the Yakama dialect of Sahaptin since 2008. Beavert also is deeply involved with the university’s Northwest Indian Language Institute, which provides training in applied language teaching and in linguistics to Native American language teachers of the Northwest through its summer institute and on-site trainings.

Littlebull has dedicated the proceeds of her first book to support the Mt. Adams School District Sahaptin language program for supplies, projects and participation in a language bowl, she said. The book’s cost and where it will be sold are still being determined, but it could be available for purchase in about a month.

Ultimately, Littlebull hopes anything she creates will ensure that more people will speak and read Sahaptin, because language is more than words.

“It’s who we are,” Littlebull said. “It’s where we come from and who we’re going to be.”

Littlebull, 48, who has taught Sahaptin since 1990, is among those around the world who are working to preserve vulnerable languages, some of which are spoken by only a few people.

According to the Endangered Language Fund, of the 7,000 languages spoken today, at least half are projected to disappear in this century.

The nonprofit, which is affiliated with Yale University, has worked since 1996 to slow that loss by supporting endangered language preservation and documentation projects with grants to individuals, tribes and museums in more than 55 countries.

Especially important in its efforts are establishing orthographies — guidelines for speaking and writing languages — and literacy materials for endangered language teaching programs.

As part of its efforts to preserve and revitalize endangered languages, the fund has provided two grants to Beavert and Sharon Hargus, a linguist at the University of Washington. They co-wrote the highly regarded “Ichishkíin Sinwit Yakama/Yakima Sahaptin Dictionary,” the first modern published dictionary of any Sahaptin dialect.

It was published in 2010. Work on a second edition is well underway.

Sutterlict, who is the Mellon Endowed Chair of the Sahaptin Language Department at Heritage and director of its language center, said those who speak the dialects can communicate well with each other.

“The (Yakama Nation) has 14 tribes and bands, but the elders are able to communicate very easily with Umatilla and Warm Springs,” Sutterlict said.

“Of course, that is the key. If I could magically make every adult person who is enrolled in the Yakama Nation fluent, we’d still be in danger” of losing the language, he added.

Nearly 11,000 enrolled members comprise the Yakama Nation. Littlebull estimated that “maybe” 25 members can have a conversation in Sahaptin without using any English. Adding in those who speak the Umatilla and Warm Springs dialects, that total is about 100, she said.

Littlebull, who speaks more than a dozen languages, grew up in a family of language lovers and teachers. She heard Sahaptin at home and began studying it using the first written record of the language created by Charles John Felix Adolph Pandosy, commonly known as Father Pandosy, when the Jesuit priest came to the Yakima Valley in the mid-1800s.

She learned from relatives and other teachers with a deep knowledge of their ancestral language: her aunts, Lena Owens and Rosaline Bassett; Levina Wilkins; her uncle, Joejay Pinkham; Tommy Eli; Australian linguist Bruce Rigsby; and of course Beavert, who published her first dictionary in 1975.

Later versions of that and other dictionaries and workbooks such as Catherine Arquette’s advanced language guide included more stories, advanced phrases and specific enunciation guidelines.

“Growing up with people like Lena and Rosaline and Joejay kind of gave me an advantage,” Littlebull said.

Dictionaries and workbooks improved with better technology. These days, Littlebull can create flashcards online that are accessible to almost anyone. And in writing and illustrating her graphic novel and accompanying animated cartoon, she will include the option of pulling out the Yakama dialect of Sahaptin so other tribes can insert their own language and dialects.

She’s titled her book series “Ayayati,” which means “everyone have fun,” Littlebull said; the first book in the series is “Nusux” (salmon). She’s halfway done with the second and third books.

While she was learning her native language as part of everyday life, Littlebull remained mindful of those who never had that opportunity. Some were taken from the reservation to boarding schools, forced to speak English and forbidden to speak Sahaptin.

Teaching them their native language is another way of helping them reclaim their culture, celebrate it and preserve it.

“We can take this and we can teach this to those who didn’t have that opportunity to learn,” Littlebull said.

Many ways to learn

With the future of the Yakama dialect of Sahaptin at a crossroads, several educators and organizations in Yakima County have created an alliance designed to preserve it, and in that process create uniform standards for its instruction.

Littlebull, who is a sophomore majoring in biomedical sciences at Heritage with a minor in visual arts, is unsure if she’ll be able to teach Sahaptin at Mt. Adams this coming school year. That depends on her class schedule at Heritage.

The alliance capped its first year with a Sahaptin competition for students in late May.

Littlebull is an active, engaged teacher who gestures energetically and moves around her classroom, drawing what words mean, repeating them and putting them in context.

“People tend to learn better if they can draw it ... see it, say it, hear it,” she said, noting that she also likes to label things for constant, easy reinforcement.

The visual aspect is important, said Joana Jansen, associate director of the Northwest Indian Language Institute at the University of Oregon.

Littlebull’s creative and unique approach to teaching Sahaptin offers another way for students to reclaim their identity and culture through language — and express in their own language what they can’t in English, Jansen said.

“The grammatical structure of this language is gorgeous,” Jansen said. “A single word in Ichishkíin can say what several words in English say.

“There’s so much richness encoded in the words. A single word can paint an entire picture.”

Sutterlict illustrated that by mentioning the word “antidisestablishmentarianism,” which is one of the longest nonscientific words in the English language. It’s a complicated religious issue that takes paragraphs to explain.

He teaches Ichishkíin 101 and Ichishkíin 102 at Heritage, but reaches students of every age through the center at Heritage, the language institute at the University of Oregon and about three dozen instructional Sahaptin videos he posts on YouTube and Facebook.

Sutterlict is creating more Ichishkíin material in multiple levels of multimedia to reach more potential students of the language using everyday situations and words relating to their lives.

“It was against the law to speak it at times. It had to be hidden,” he said. “Things aren’t like that now. We need to bring it out and promote it.”

It’s especially important to have young children learning and speaking the language on a regular basis, Sutterlict said.

“Warm Springs is doing some pretty good stuff. They have some younger kids learning it,” he said.

Efforts to preserve Sahaptin are among the top priorities of the institute, Jansen said.

“Ichishkíin is a big focus of ours now because of our relationship with Virginia,” with extensive work on documentation and description, Jansen said.

Beavert earned a doctorate in linguistics from the University of Oregon in June 2012 at age 90. The Sahaptin class came into being when she decided to pursue a doctorate and some of her students followed her, Jansen said.

“The class is a regular (University of Oregon) credit-bearing class that satisfies language requirements if taken for two years,” she added.

In the summer, the institute’s programs offer Native language teachers and students in-depth study of their languages, along with courses on teaching methods and language advocacy, including language in the home.

“It’s great to know about a language, but if we’re going to revitalize Native American languages, they have to be used,” Jansen said.

And in revitalizing Sahaptin, supporters need to promote it and use it, Sutterlict said. It needs to be a part of everyday life.

“If the young people don’t see it or know that they could learn it, it’s just going to stay sleeping,” he said.

TOPPENISH, Wash. — The Yakama Nation will honor Native American women veterans at a May 17 event.

The history behind a unique, peaked-roof building on Fruitvale Boulevard

As Fruitvale Boulevard has changed, businesses lining it adjust with the times