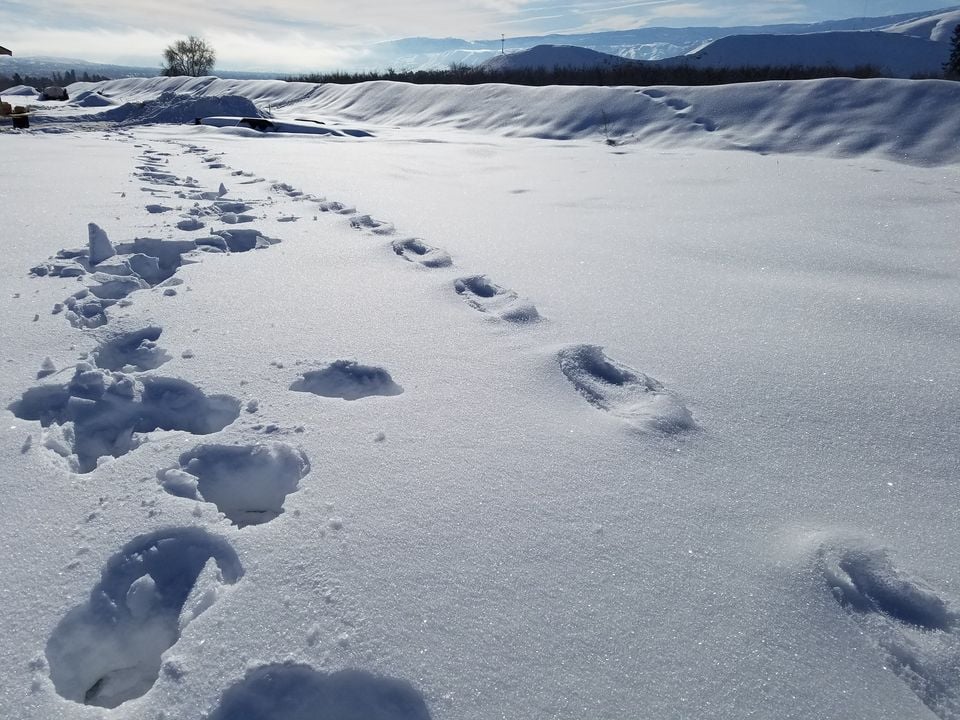 A column of mysterious tracks, right, flanked by human tracks, cut through a field in Sunnyslope, Wash.. (PETE O'CAIN/Wenatchee World) 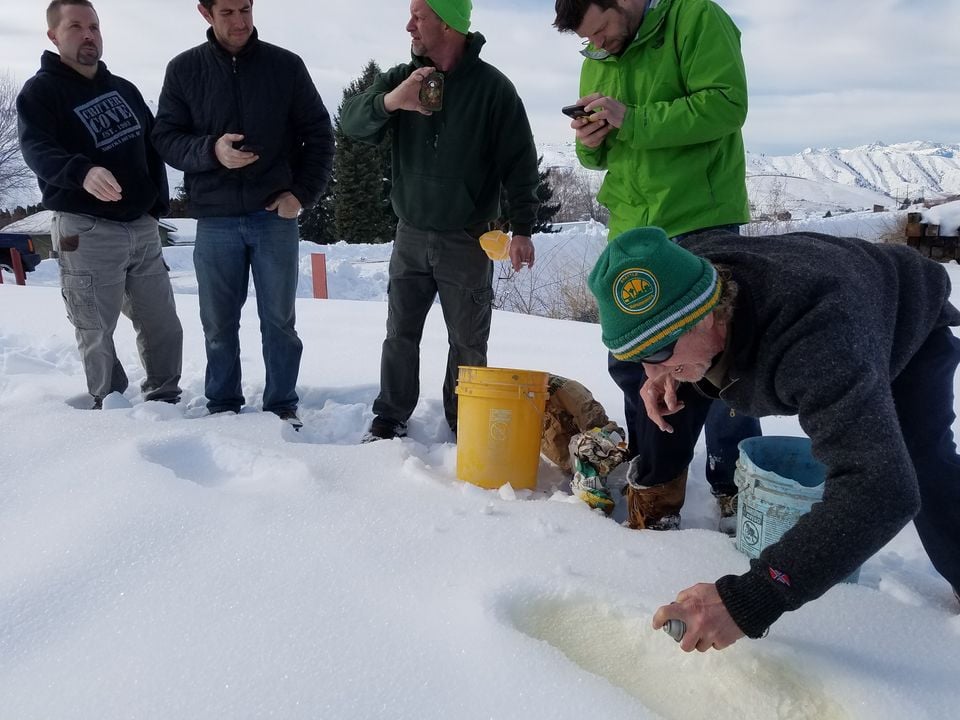 A column of mysterious tracks, right, flanked by human tracks, cut through a field in Sunnyslope, Wash.. (PETE O'CAIN/Wenatchee World)

SUNNYSLOPE — Paul Graves stands in a field buried in a foot of snow with his legs stretched one in front of the other like some cruel game of Twister. He’s trying to mirror a mysterious set of tracks that recently appeared in Sunnyslope.

Each individual track is about two feet long, a couple inches deep and 4 to 6 feet apart, heel to heel. They stretch for a half-mile in a near perfect single file line from an orchard through a field, into another orchard, across Easy Street and past an irrigation canal.

The way Graves is standing, a stiff breeze may knock him down.

“It’s not a person on snowshoes,” Graves said. “There’s no way that you could keep your snowshoe that in-line and for that far — all the way through that field, perfectly in-line.”

Graves is a Bigfoot researcher, has been for almost 30 years. He’s well-known in the Bigfoot community and was featured in a December 2015 special edition of Newsweek focused on the mythical creature.

Graves and five others, including a Wenatchee World reporter, on Tuesday followed the tracks from Summer Blossom to an irrigation ditch north of Easy Street, where the most prominent prints were found.

The tracks continued further toward a treeline, but the group declined to go further, pending breakfast. Before leaving to eat, Graves filled one with plaster to make a cast of the print.

The prints were discovered by Roy Bianchi, of Rock Island, who found them Monday behind the under-construction Summer Blossom development on Sarah Drive.

“I knew they were Bigfoot tracks,” Bianchi said, a friend of Graves. “I’m a believer.”

Bianchi knocked on Graves’ door at 7:30 a.m. Tuesday to tell him what he’d found. His best guess is that they were made Feb. 9.

Graves said all signs lead to the “big guy.”

“If it was a fake track (the print) would be even,” Graves said. “These show contours of a live foot.”

The tracks aren’t very deep, but he thinks that’s due to a combination of snow or rain accumulation and the snowshoe effect that he says comes with a foot of this size.

“…these Bigfoot prints often are deeper in the ground, but at the same time they have a wider foot to disperse their weight so it all comes down to mathematics and you’d have to figure out the weight of the creature and all that,” Graves said.

Examining a print, he notes what he believes is a heel impression and a midtarsal break behind what would be the ball of the foot.

The tracks don’t stagger side-to-side the way human tracks do, but instead are a single column.

Josh Lawrence, a Bigfoot researcher who investigates with Graves, noted that the tracks bear some resemblance to deer postings, but lack indentations from hooves.

“To see zero hooves? It’s weird,” Lawrence said. “There’s not very much other things it could be.”

The state Department of Fish and Wildlife was provided photos of the prints for comment, but did not reply.

Perhaps most bewildering for the group was a segment of tracks in an orchard that maintained four-foot dispersion as they passed directly below waist-high branches. No hairs or broken tree limbs were found.

“How are you that consistent under (branches) this low?” wondered Derek Bianchi, Roy’s son. Adding, “Like, how do you duck under that and not rub your back?”

Dave Hanson owns the company that’s building Summer Blossom and followed along with Graves and others.

“I’m not a Bigfoot believer, but this is really weird,” Hanson said.