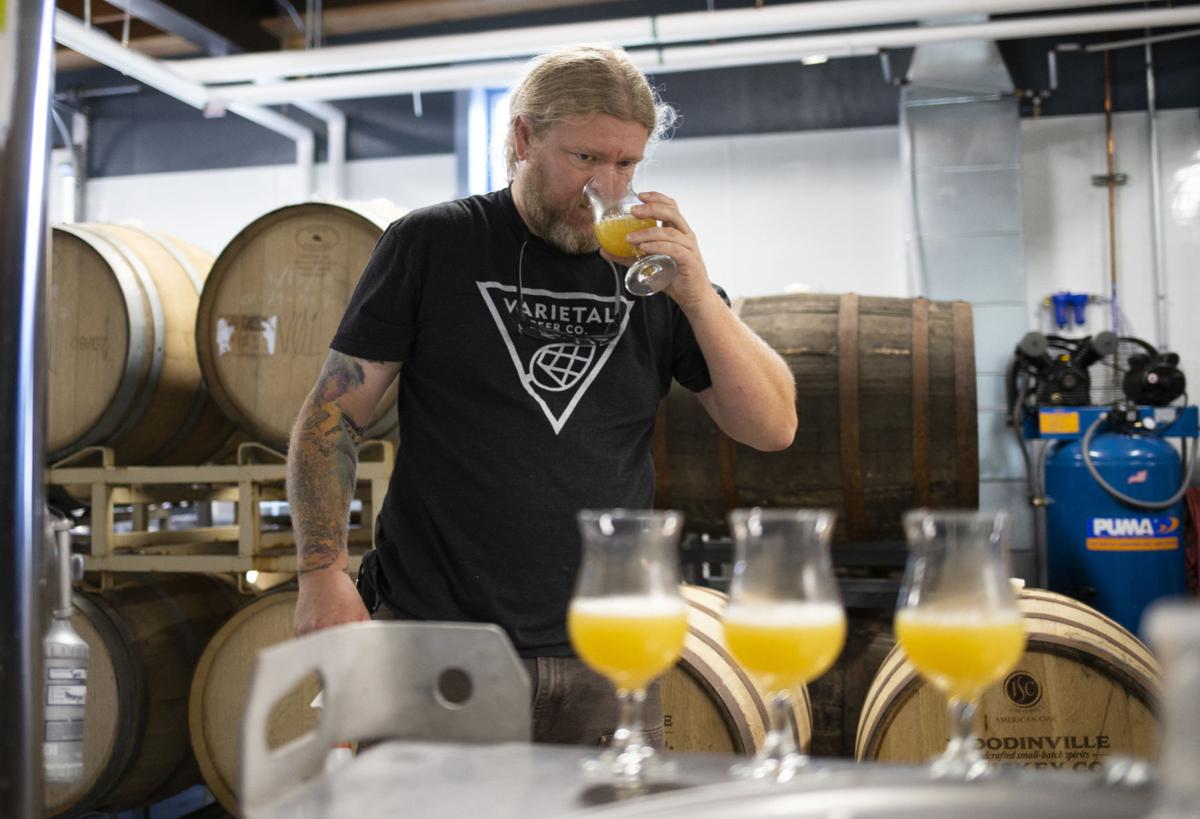 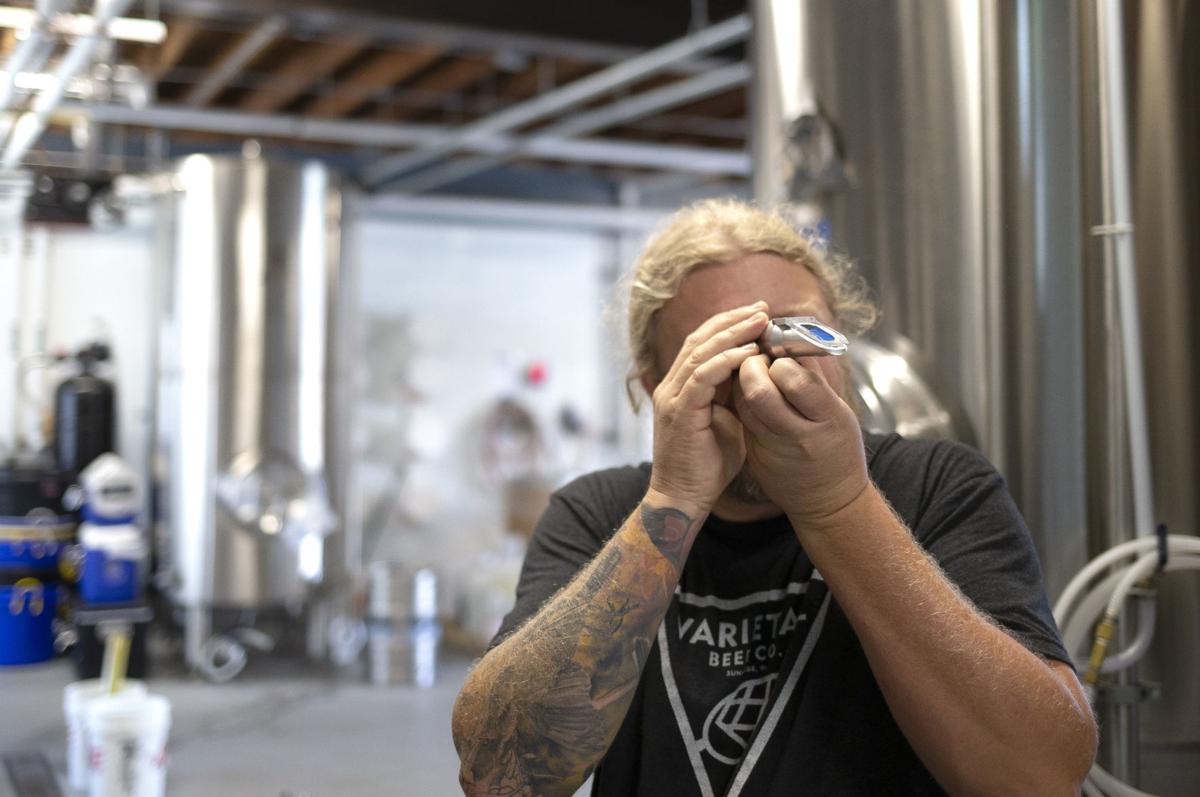 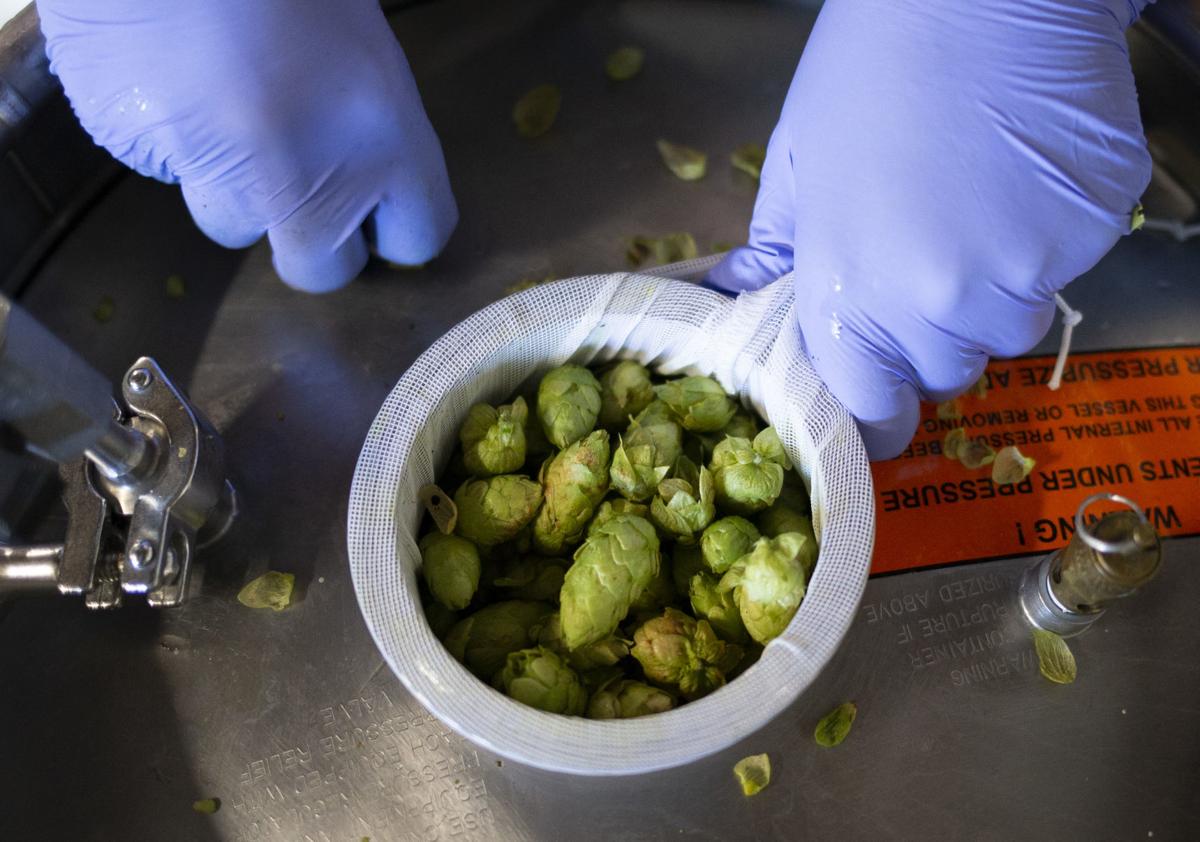 Rachel Verhey-Goicoechea puts hops in a hop bag inside a keg while doing a fresh hop infusion at Varietal Beer Co. on Friday, Sept. 13, 2019, in Sunnyside. 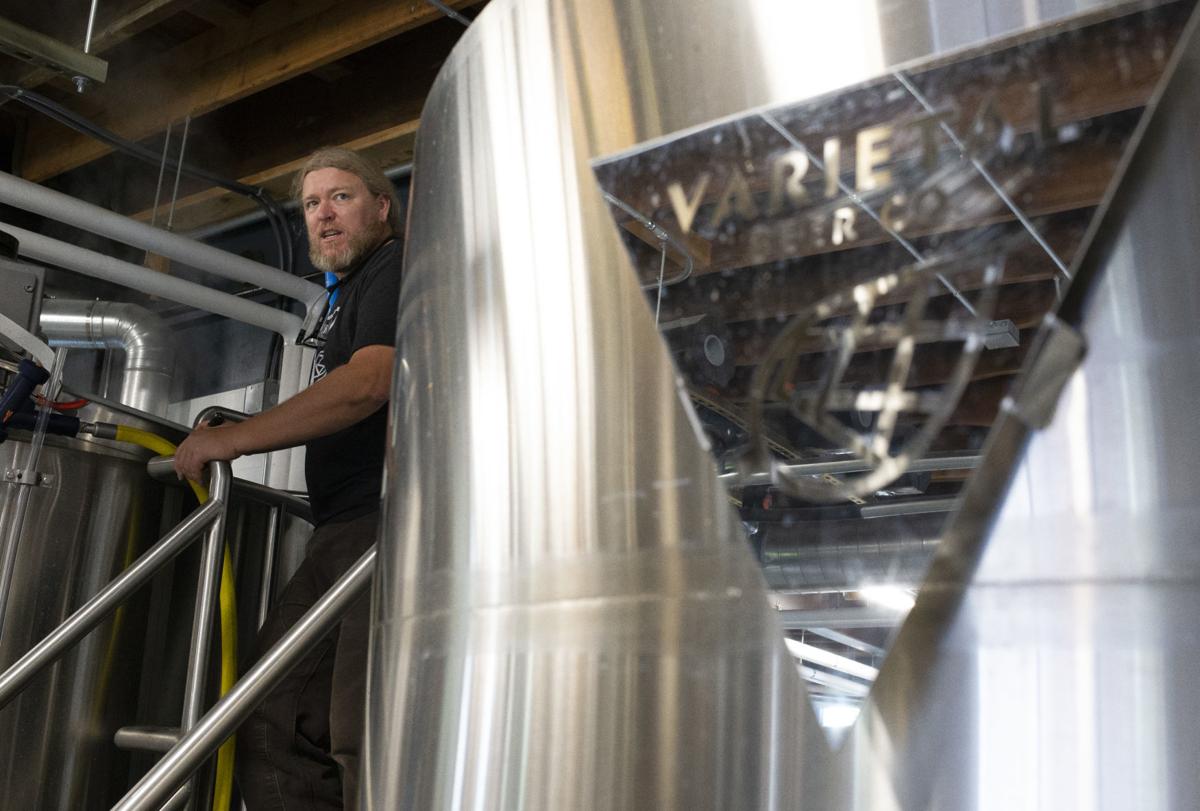 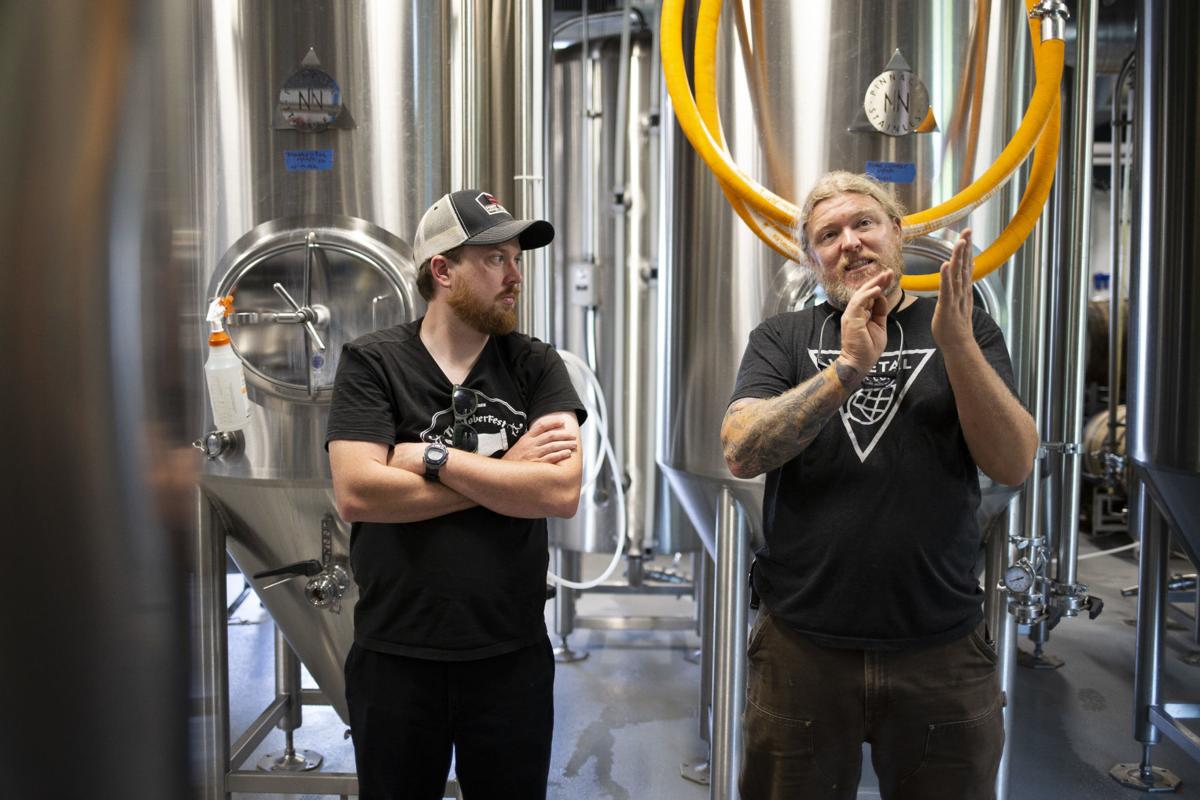 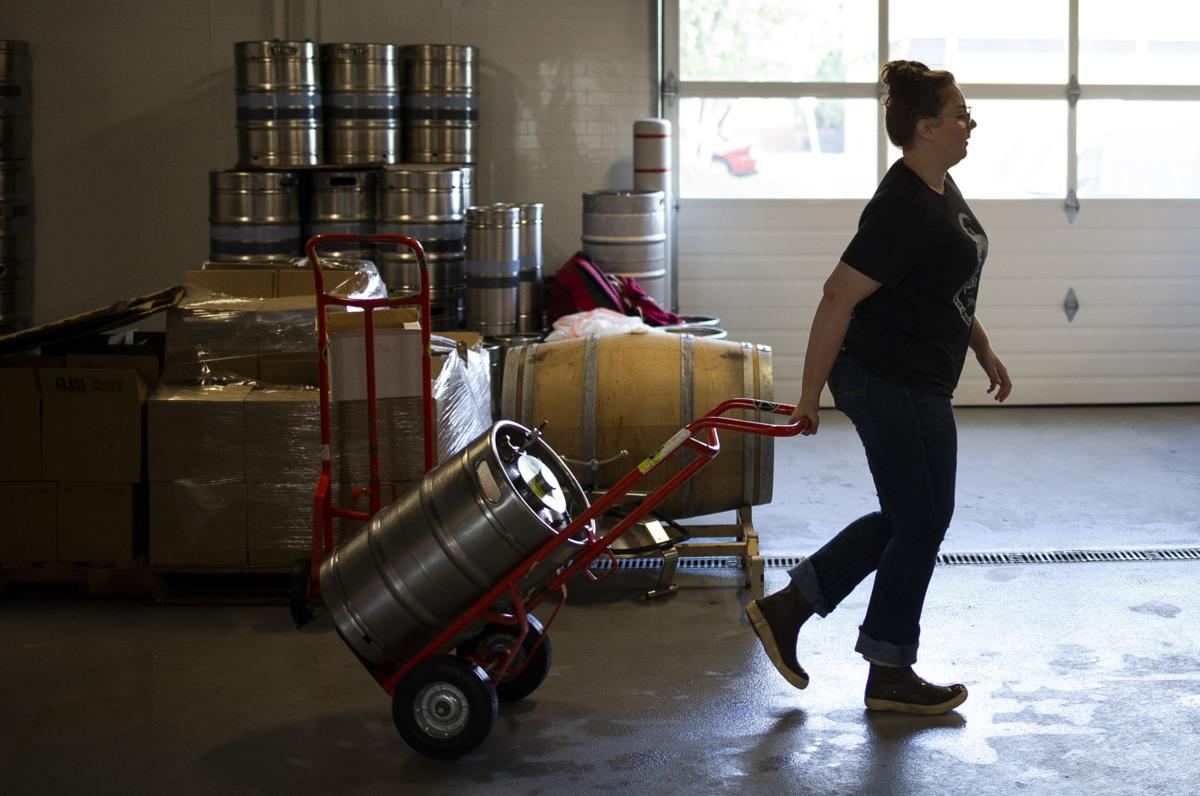 Rachel Verhey-Goicoechea carts a keg to the walk-in cooler to sit for four hours while doing a fresh hop infusion at Varietal Beer Co. on Friday, Sept. 13, 2019, in Sunnyside.

Rachel Verhey-Goicoechea puts hops in a hop bag inside a keg while doing a fresh hop infusion at Varietal Beer Co. on Friday, Sept. 13, 2019, in Sunnyside.

Rachel Verhey-Goicoechea carts a keg to the walk-in cooler to sit for four hours while doing a fresh hop infusion at Varietal Beer Co. on Friday, Sept. 13, 2019, in Sunnyside.

When Varietal Beer Co. opened its doors in Sunnyside last year, the five co-owners intended to make high-quality beer with local ingredients and create a meeting space for community members.

They anticipated selling roughly a third of their beer in-house and distributing the rest.

A year and a half on, their accomplishments have surpassed their goals, said brewer and co-owner Chris Baum.

The company has hit production capacity in its 310-gallon brewhouse; won a gold medal in the 2019 Washington Beer Awards for its Casita lager; drawn local and far-off customers; and brewed countless collaboration brands, including one this month with former Stone and Anheuser-Busch brewer Mitch Steele, “who’s kind of the father of the modern IPA,” said Baum.

It started with a pitch during a Valley business competition and an offer by the Port of Sunnyside to renovate and lease the brewhouse to the budding company to help revitalize the city. The founders include Baum, Chad Roberts, Karl Vanevenhoven, John Cope and David Paulson.

When Varietal opened in April 2018, its brewing equipment hadn’t yet arrived. So the company contracted beer from local breweries, including Bale Breaker Brewing, Snipes Mountain Brewery and Bron Yr Aur Brewing, all of which the founders had either worked for or had a close relationship with.

In August 2018, Varietal started pouring the first beers brewed in its taproom. They have been cruising since.

The company has one award-winning lager, Casita, which sells out the quickest of all their brands, followed closely in sales by a series of India Pale Ales, or IPAs.

Other beers include a Russian imperial stout that is soon to be released, a large barrel-aged stout and a sour program — which kicked off this year with a mango-blueberry-raspberry mixed fermentation. The berries came from farms within 2 miles of the brewhouse, and soon Baum plans to incorporate local wine grapes into a beer.

Like the fruits in the company’s beer, the hops used are hyper-local — usually from farms within a 20-minute drive of the brewhouse. The company gets them through Yakima Chief Hops, which co-founder Roberts also works for, and directly from farmers.

They also prioritize buying malt made in the U.S., said Baum, and the company is increasingly sourcing more malt from small maltsters. Some comes from Spokane-based co-op LINC Foods, while much is sourced through Mecca Grade, an estate malthouse out of Oregon.

Baum said nearly half of the company’s beer brands have been collaborations with other breweries, many of which are from the Yakima Valley. Baum doesn’t just see this as an opportunity to grow the brand, but also a chance to learn other brewers’ processes.

“It’s really fun to see other people’s thought process — how they think about designing beers,” he said. “It’s just an opportunity to learn.”

In anticipation of Yakima’s Fresh Hop Ale Festival this year, Baum said Varietal will be part of 12 collaboration beers. Some are made in collaboration with local brewers, while other are further flung, including some from Mexico and one with renowned brewer Steele.

Already, Varietal’s regular production is moving as fast as it can.

“We hit capacity this summer. Without us bringing in more equipment, there’s no way for us to produce more beer,” Baum said.

Over half of production is sold in-house, and the company has hired four full-time staff — more than anticipated in their first-year business plan.

“There hasn’t been a spot like this in Sunnyside previous,” said Baum.

There is a regular crowd that frequents Varietal during the week, while the company also sees out-of-towners who have heard of their growing company stopping on their way from Seattle to the Tri-Cities, for example.

Their presence has contributed to and complemented community and business growth in Sunnyside.

A food vendor that for a time served in Varietal’s beer garden has since rented and built out a brick and mortar restaurant across the street from the taproom: Jesse’s Smokken Hot Meatz.

In recent weeks, the Port of Sunnyside has allowed food trucks and vendors to open up in a lot across from Varietal in conjunction with the local farmers market. Baum said that has brought more people downtown and has brought a boost to the sales of food truck vendors in their beer garden.

Jay Hester, executive director of the Port of Sunnyside, said Varietal is doing exactly what the port had hoped for in offering space: helping revitalize the community.

“Sunnyside is continuing to grow fairly quickly,” Hester said. “We believe (Varietal is) doing some of the most goodwill that you could do in a community. It’s bringing the community together, and more people are interacting in the downtown core than in past years.”

Down the road, Baum said he hopes to see Sunnyside continue to grow. He would like another brewery in town and maybe a pizza shop.

For those looking to venture into the market, Baum said to look to all available resources, from what the county offers to establishments like the Port of Sunnyside. Then, plot a solid business plan accounting for both best- and worst-case scenarios.

“You won’t stick with it, but it gets you thinking in the right way,” he said.