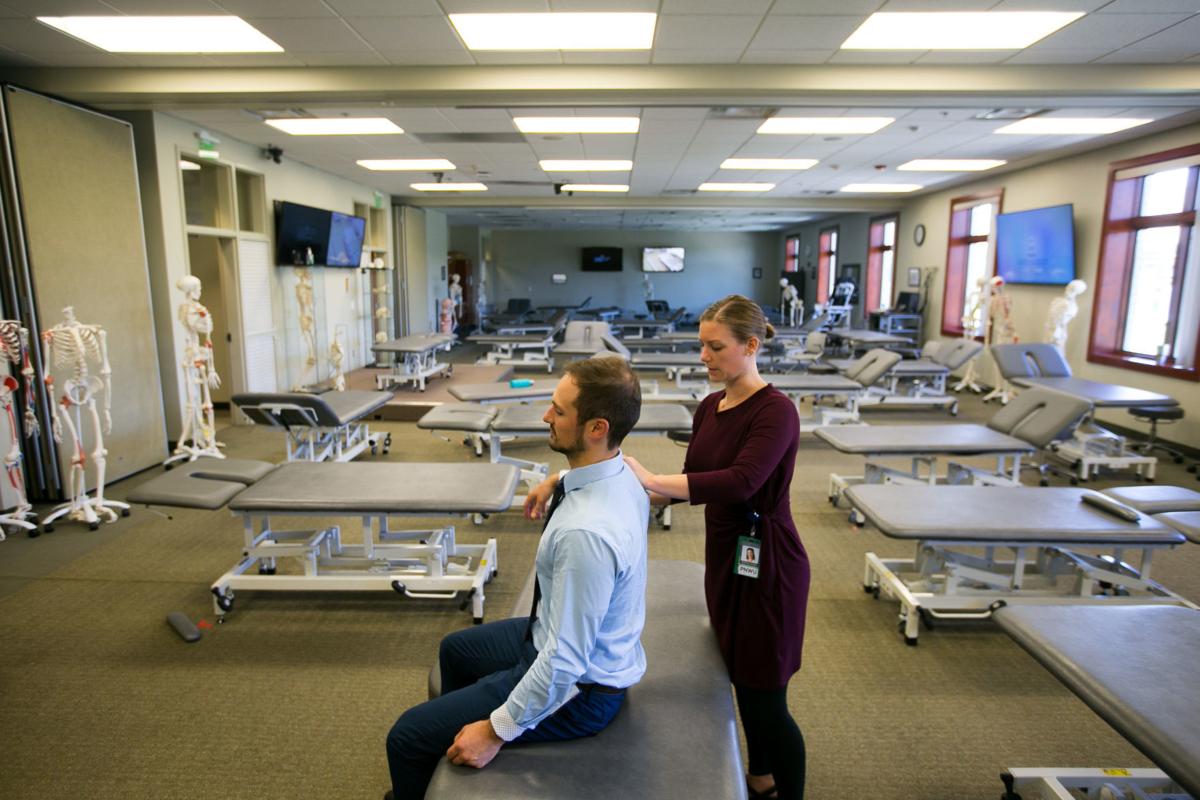 Brittney Guiou, a third-year medical student, demonstrates on Adam Scottaline how to evaluate a range of motion in the Osteopathic Principles and Practice laboratory on Sept. 11, 2019, at Pacific Northwest University of Health Sciences in Yakima. 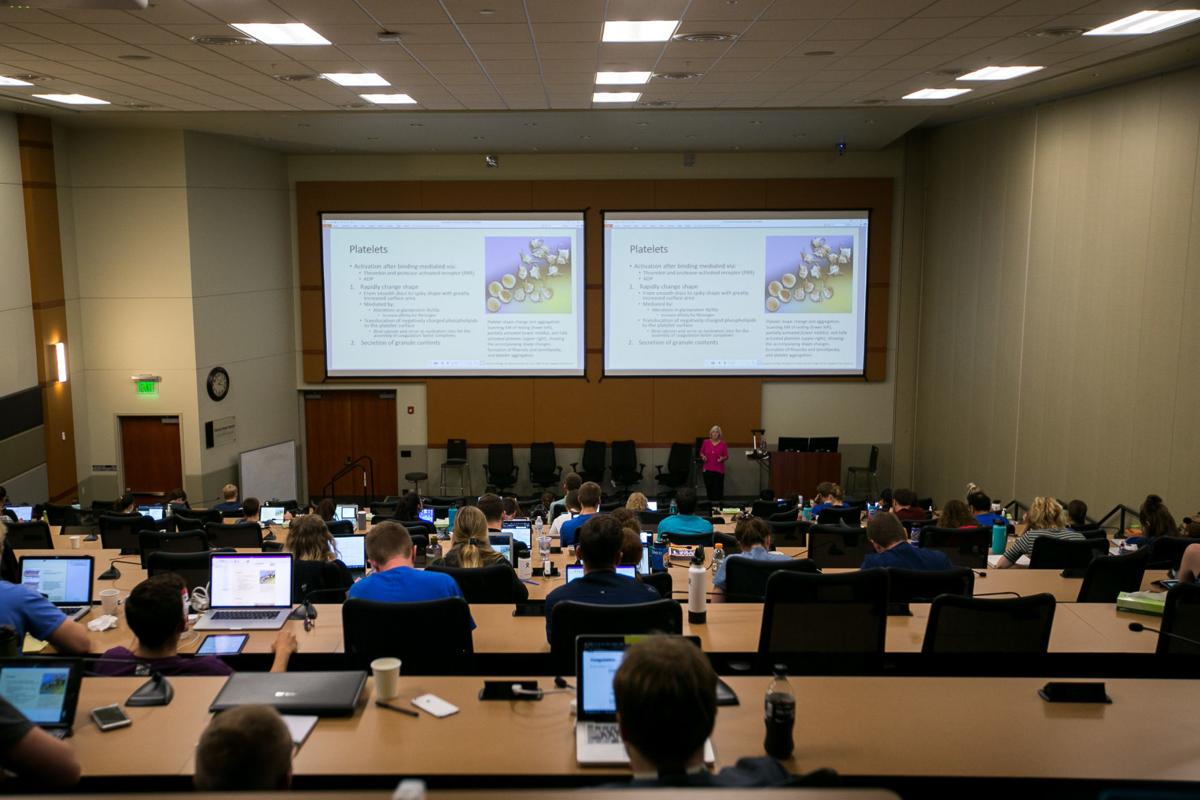 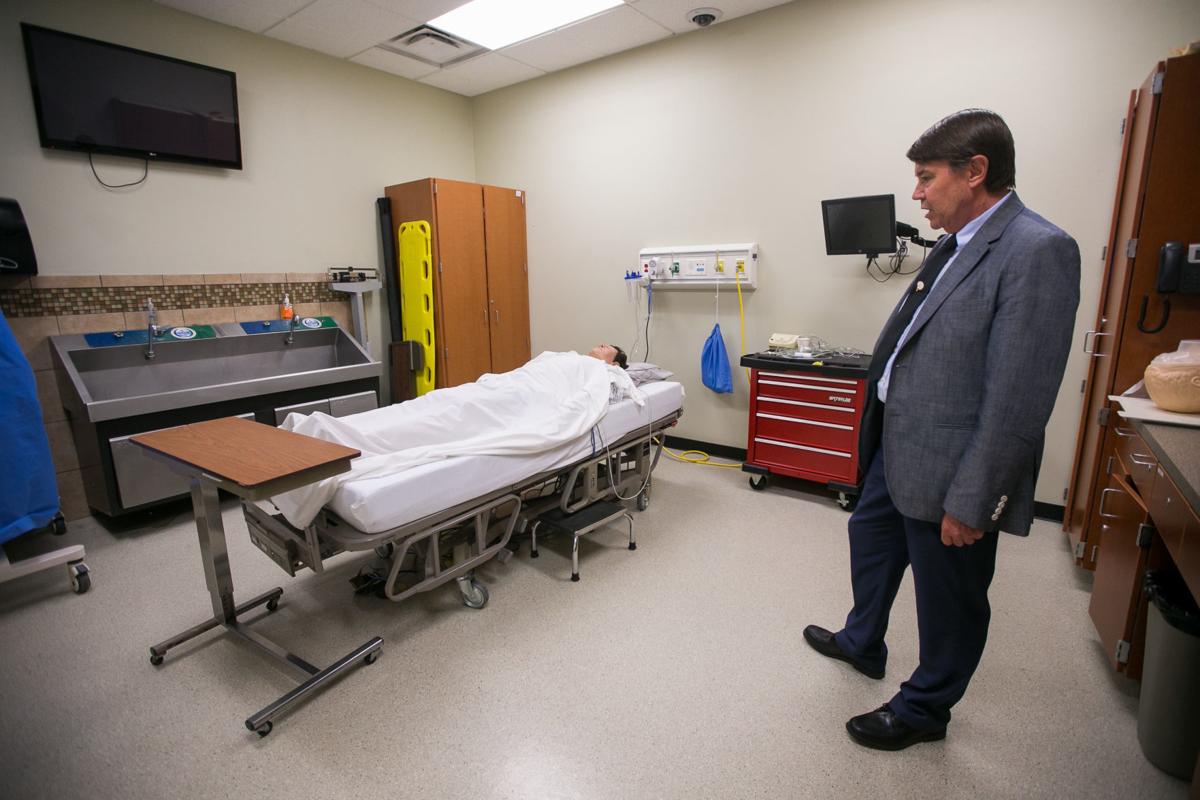 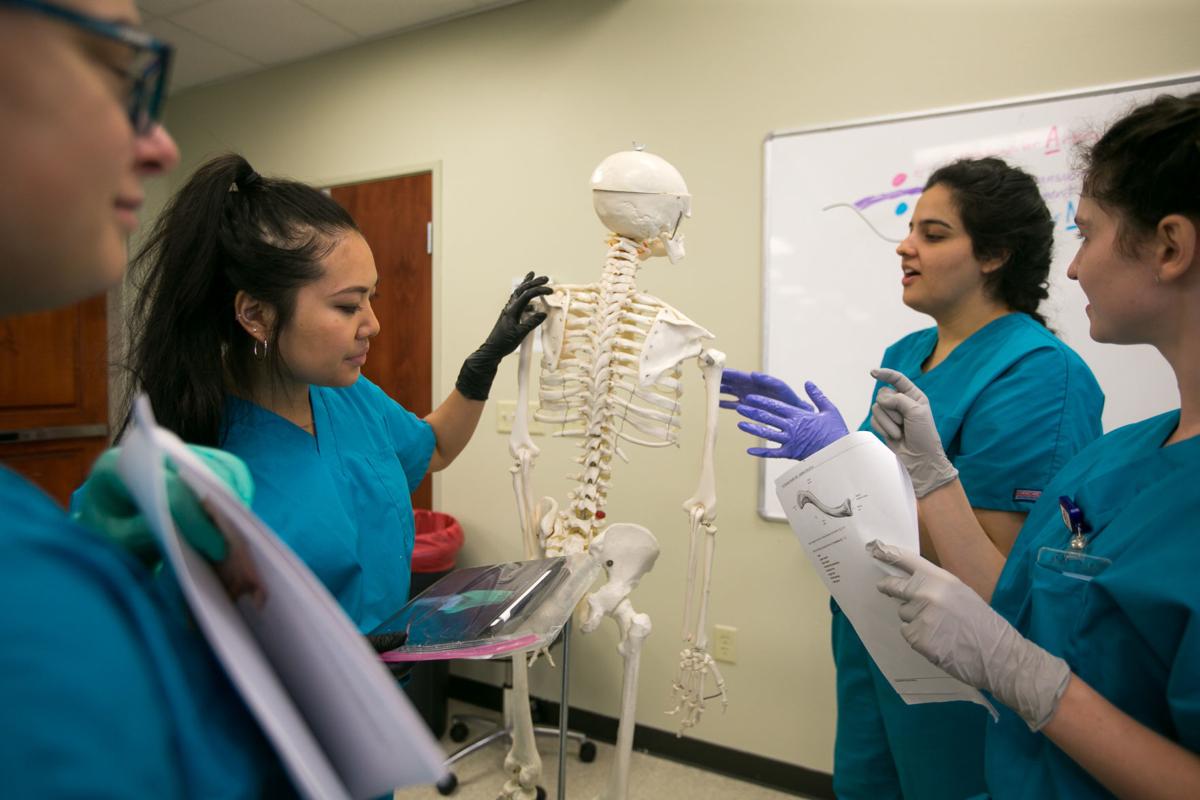 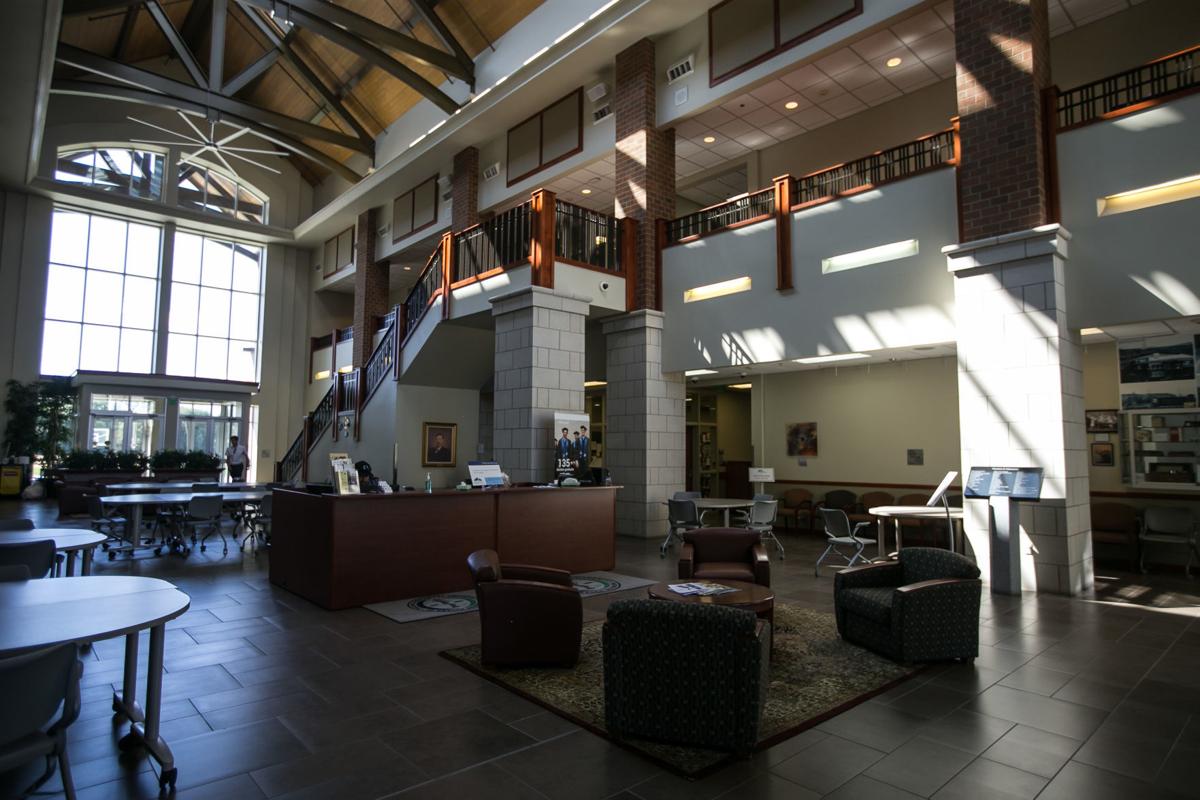 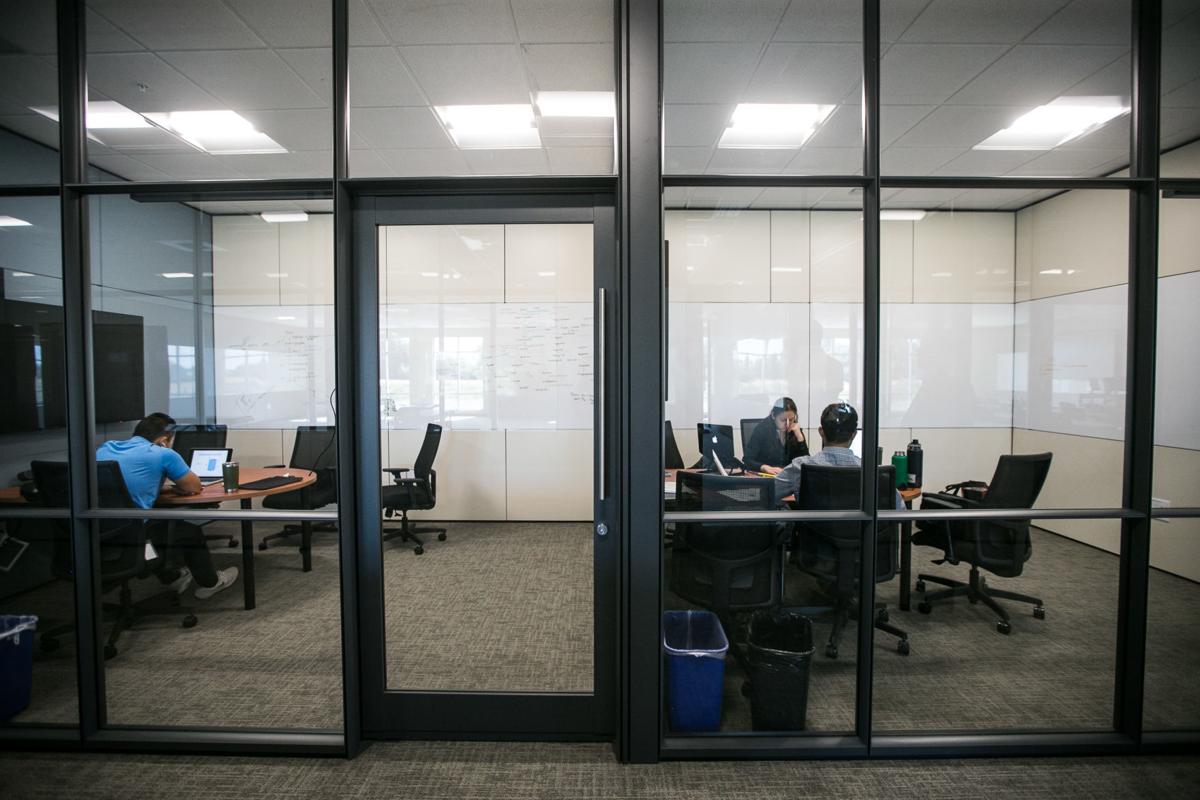 Brittney Guiou, a third-year medical student, demonstrates on Adam Scottaline how to evaluate a range of motion in the Osteopathic Principles and Practice laboratory on Sept. 11, 2019, at Pacific Northwest University of Health Sciences in Yakima.

Chase Livingston, Charles Vaughn Bulfinch and Isaac Broner all have something in common: They graduated from Pacific Northwest University of Health Sciences in Yakima.

They’re proof that the university is meeting its mission of establishing more doctors in rural areas of the Pacific Northwest, where physicians, nurses and mental health experts are in high demand.

In 2005, a handful of area doctors, who wondered who would take care of their patients when they retired, formed a nonprofit and began raising funds to build the university.

The school was constructed off Terrace Heights Drive on a road that is now named University Parkway.

“They literally found a field in Terrace Heights and said let’s put it here,” said PNWU President Michael Lawler. “From that point forward, we’ve been building this campus.”

Since opening, the school has graduated 761 doctors in osteopathic medicine, with 47 from the Yakima Valley.

“That’s pretty cool,” Lawler said. “A large portion of them are in training. Some have yet to finish residency, which takes about three years.”

The studentsThe school enrolls about 570 medical students, with 135 incoming freshmen each year.

Students, who commit to serve in rural areas, are recruited from the five-state region of Washington, Oregon, Montana, Idaho and Alaska, said Thomas Scandalis, dean of the college of osteopathic medicine.

“Even with that kind of specific outcome in mind, we have more than 4,000 applications a year for those 135 seats,” he said. “So, it’s very competitive.”

A majority of the graduates — more than

80 percent — have come back to work in rural communities, he said.

“They tell us in their essays that they witnessed firsthand the lack of health care services in rural areas,” he said.

Third- and fourth-year students are paired with local and regional clinics for hands-on training. Students also participate in a project serving the Union Gospel Mission.

“We believe that it’s our regional system of training with ties and commitment to the community that brings them back,” said Dr. Anita Showalter, associate dean for clinical education.

Family medicine and general internal medicine are the greatest needs in the Yakima Valley, she said.

Medical resources here have run short amid growth and passage of the Affordable Care Act, which expanded health insurance offerings and increased demand for health care.

“So we had this sudden influx of patients without enough physicians, nurse practitioners to take care of them,” Showalter said. “Hopefully, we’ll see an increase in our alumni staying and narrowing that gap.”

Medical students are being trained with area professional health care providers, such as nursing students from other schools, Scandalis said.

There’s more use of technology, such as telehealth medicine that allows physicians to see and treat patients remotely.

Often patients will postpone treatments that are not offered in their areas rather than travel, Scandalis said.

“We see this phenomenon that patients tend not to get care when in rural areas where services they need aren’t offered,” he said. “So they wait until their condition gets worse, and the outcome isn’t always beneficial.”

Students are also being trained on hand-held ultrasound devices to better serve rural areas where there may not be an imaging center.