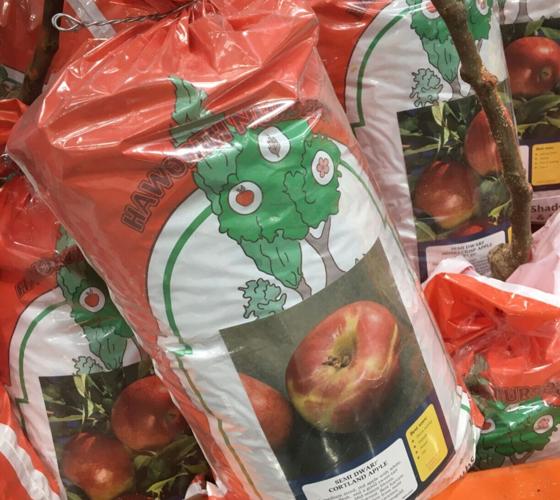 Just because garden stores sell apple trees doesn't mean you should buy one for your backyard, unless you want to invest significant time and energy protecting the tree (and the region's apple industry) from pests. 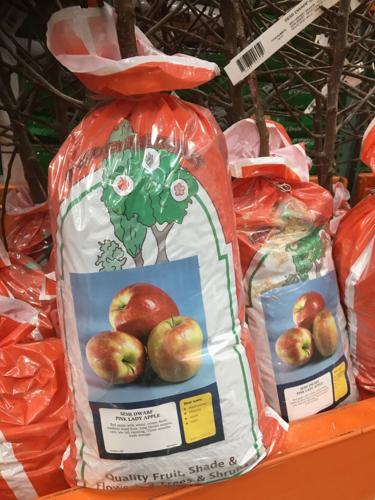 Having your own apple tree may sound like a good idea, but it probably isn't.

The codling moth is hard to kill; if you have apple trees in your backyard, you already know that.

Just because garden stores sell apple trees doesn't mean you should buy one for your backyard, unless you want to invest significant time and energy protecting the tree (and the region's apple industry) from pests.

Having your own apple tree may sound like a good idea, but it probably isn't.

The codling moth is hard to kill; if you have apple trees in your backyard, you already know that.

When my husband and I bought this home and started gardening 40 years ago, the first thing we did was plant five apple trees. We had romantic visions of golden autumns, gathering perfect apples from our perfect trees.

The simple life sure got complicated when we discovered that if you plant apples (or pears), codling moths will find them and continue their life cycles as larvae in your fruit. A neighbor, an ag chemical salesman, solved the problem by keeping us supplied with high-octane pesticides. We sprayed away, unabashedly grateful to be “living better chemically.”

Times changed. We changed. Our neighbor moved to North Carolina. But one thing remained the same. If you try to grow apples without scrupulous vigilance and management, pests will find them, and you can bet on it.

I wanted to cut the trees down and grow something else. Who needs to grow their own apples when you live in the “Apple Capital of the World”? But my husband refused to give up and switched to spraying with Spinosad, an organic pesticide based on metabolites of a soil bacterium.

The codling moth goes through at least two generations, from egg-to larvae-to-pupae-to-moth each year. Sometimes, there may even be a third generation that fails to mature before winter, but can still ruin apples. You’ll find damage in unprotected fruit in late May to mid-June, or in mid-August through September. The worm leaves an unmistakable entrance hole, topped with a gob of excrement, and can burrow straight to the core and feed on the seeds.

Using Spinosad to control possibly three generations of codling moths involves spraying roughly every seven to 10 days from petal-fall, or timed to coincide with the egg-laying activities of each generation of pests (one more thing that has to be monitored). That adds up to a minimum of six sprays each season. Who has that kind of time? Besides, we still had wormy apples. Controls like Spinosad are most effective on a larger scale, like in blocks of trees in orchards. And Spinosad can kill beneficial insects, as well as pests.

Anyone else would have thrown in the towel, but not my husband.

Ditching sprays, John switched to tying specially designed multi-layer paper bags over each apple, once it’s reached thumbnail size. If you take great pains to attach each bag PERFECTLY, the apple continues to grow in the bag. Removing the bags late in the season allows sunlight to develop color. Bagging apples is tedious, so John removed all but the best fruit. His goal was “100 perfect apples from each tree.” He also reduced the size of our trees with radical pruning to make the ladder-work easier (I wish we had planted on dwarfing rootstock), and this arduous pruning task had to be repeated each spring.

And after all that, a few cooties will still find a way in and ruin 20% of the crop.

Since switching to the bagging method five years ago, I like to think that we’ve not only gotten older, but wiser. John has since cut down our two biggest trees. Maintaining them was too much work. Next week, we will cut down a third, leaving us with two trees that John feels he can manage with bags. One of them was a favorite of our son Robbie.

If you plant an apple tree and don’t bag your fruit, you’ll have to monitor for evidence of codling moth several times during the growing season (even if you use pesticides, they’re not always 100% effective) and destroy any infested apples on the tree, as well as on the ground. Put the damaged fruit in a plastic garbage bag, and “cook” it in the sun for a few days.

From one busy gardener to another, the best advice I can give is DO NOT plant an apple tree in your backyard, unless you’re committed to a rigorous management regimen. Our local economy depends on high-quality fruit. If you fail to control codling moth, the pest can spread to other fruit trees in your neighborhood, and eventually impact commercial growers. Washington state law (RCW 15.09.060) compels property owners to control horticultural pests on their land.

Apple trees are arriving in nurseries. If you’re tempted to take one home, think again. Yakima farmers grow the best apples in the world, both conventionally and organically. Leave apple growing to the professionals, and support your local farm stand or grocer instead. Or plant plums, peaches or apricots, since they’re vulnerable to fewer fruit-infesting pests.

I will never forget the day entomologist Dr. Mike Bush opened a class for Master Gardeners with the question, “What’s worse than biting into an apple and finding a worm?” The answer, of course, was, “finding only half.”

Carol Barany and her husband, John, found paradise on 1 1/3 acres just west of Franklin Park, where they raised three children and became Master Gardeners. Contact her at florabundance14@gmail.com.