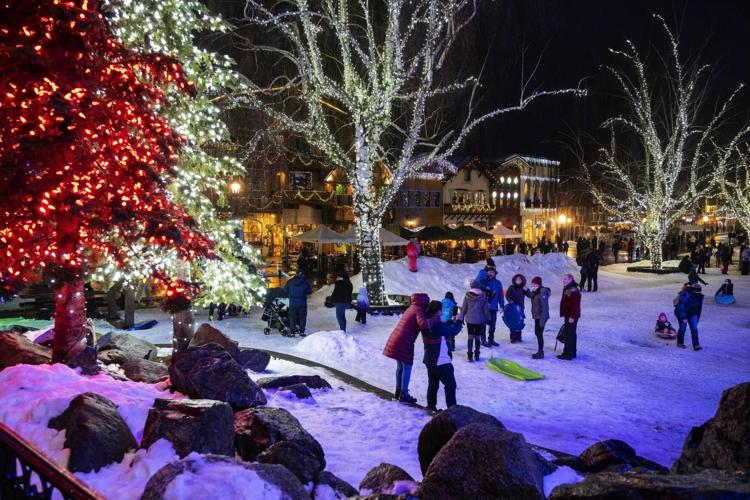 Leavenworth is lit up for winter in January 2021. The Chelan County town’s holiday light display now stays on through February in order to spread out crowds. 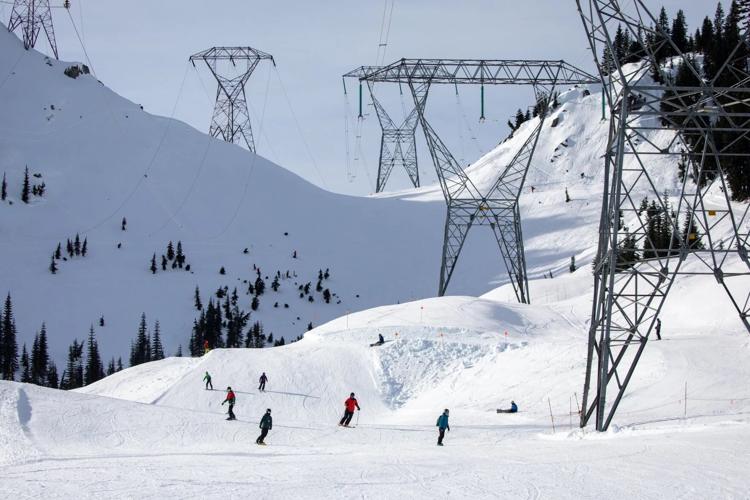 Skiers and snowboarders ride down the back side of Stevens Pass in January. While Mother Nature is unpredictable, it’s a safe bet that visits to snow country will be in full swing throughout the holiday season. 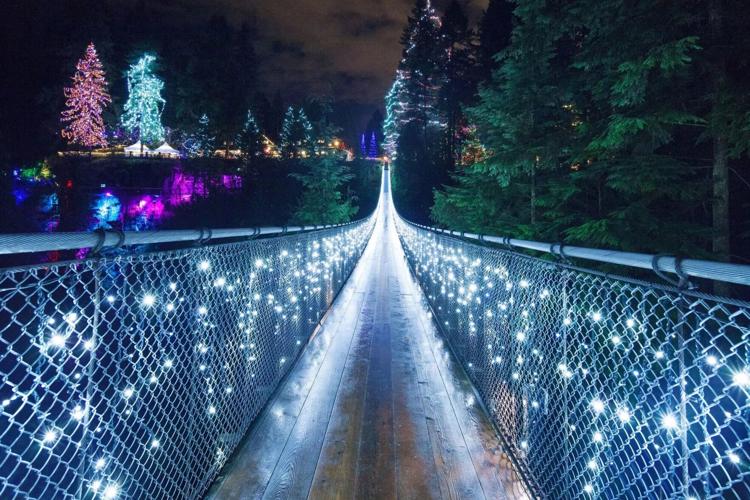 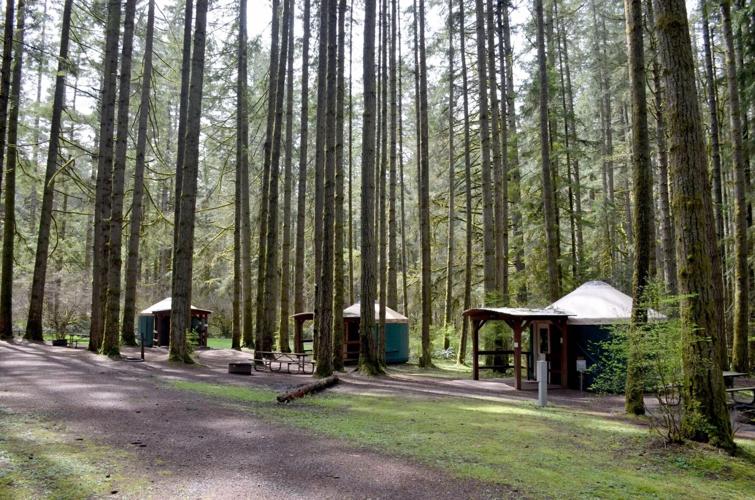 Seaquest State Park in Castle Rock is one of nearly a dozen state parks in Western Washington with roofed accommodations available for rental during the winter months, which include yurts, cabins and vacation homes. 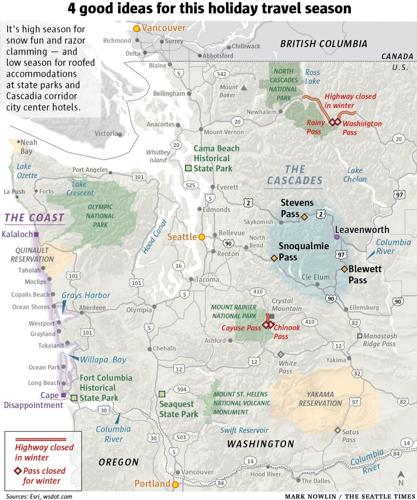 While summer travel gets lots of love in Washington, the holiday season also means time off work and school for many, making the end of the year a prime time to travel — beyond the usual rounds for family, friends, turkey and presents.

You can roam far and wide from Seattle, with nonstop flights from Seattle-Tacoma International Airport to exotic warm weather locales like Tahiti and Belize, ski towns like Steamboat Springs, Colo., and Bozeman, Mont., and historic international cities like Istanbul and Tokyo.

But if you haven’t already booked a flight, don’t despair. While it may be a bit late to grab deals for this very busy time of year in the skies, there are plenty of places to go in Washington. You can even avoid crowds if you know where to look.

If you still need a grand idea for a winter vacation, read on: This travel guide will help you navigate where it’s high season in Washington — and take advantage of areas where it’s low season.

Winter came early to the Cascades, with several feet of snow falling in the first week of November. While Mother Nature is unpredictable, it’s a safe bet that visits to snow country will be in full swing throughout the holiday season, whether for downhill skiing, snowboarding, cross-country skiing, snowshoeing, sledding or snow play.

Most of Western Washington lives closer to sea level, where snow is fleeting at best. That makes trips into the mountains to see the white stuff a very popular pastime. Sometimes too popular, as exemplified by complaints of overcrowding in recent winters. If you are planning to go to the snow on a weekend, or during the week between Christmas and New Year’s, be prepared if your first intended destination is full. Have a Plan B, like a less popular Sno-Park, or go in the afternoon, when some morning crowds have already left.

Leavenworth is an undeniable draw during the holiday season. This year will be the second season of Village of Lights: Christmastown. Instead of “flipping the switch” to turn on the lights every weekend, which drew unwieldy crowds around Christmases past, the Chelan County town’s holiday light display now stays on through February in order to spread out crowds.

Nov. 25-Dec. 24 and for the first time includes weekday programming as another way to beat the crowds. The official Leavenworth Christmas song, released last December, will be performed live Nov. 26 at Festhalle. Be advised: Krampusnacht is Dec. 5, and while the town is not hosting a planned event to coincide with this night celebrating the scary-looking character from Central European folklore, these hairy, horned costumers may be prowling the streets that day.

The Leavenworth Chamber of Commerce advises visitors to arrive early on weekends, as parking does reach capacity, and to take advantage of the free Link bus that runs 11 a.m. to 7 p.m., seven days a week, to shuttle visitors from the park-and-ride lot behind Safeway into the heart of town.

The rest of the world prefers visiting Cascadia’s big cities in the summer, when hotel rates jump through the roof in Seattle, Portland and Vancouver, B.C. Can’t imagine why.

That aversion to dreary weather and early sunsets is your gain: Deals abound for visiting our neighbors to the north and south. Head up Interstate 5 or hop on the newly reopened Amtrak Cascades service and check out the Vancouver Christmas Market through Dec. 24. For a B.C. take on holiday lights, summertime fave Capilano Suspension Bridge Park turns into Canyon Lights through Jan. 22, while the VanDusen Botanical Garden’s Festival of Lights runs Nov. 25-Jan. 2.

The Fairmont Pacific Rim is offering 15% off stays through April 30 while the Coast Coal Harbour Vancouver Hotel has a 25% discount for bookings made by Dec. 24 for stays through Dec. 30. Any hotel booked through stayvancouverhotels.com with promo code “Kingtut” gets you free tickets to National Geographic’s “Beyond King Tut: The Immersive Experience,” on display through Jan. 8 at the Vancouver Convention Centre.

In the other direction, you’ll find our little sibling city to the south at its most Portlandish while browsing handmade wares at Crafty Wonderland from

Dec. 9-11. The city’s brick-and-mortar retailers, meanwhile, band together for the annual Shop Small Win Big promotion, where buying from independent shops through Dec. 11 enters you in a raffle to win prizes. Both the Ace Hotel (promo code “SITTIM”) and The Bidwell offer discounts or gift cards to entice out-of-state residents eager for tax-free shopping.

Washington State Parks are wonderful places to car camp, with destinations like Deception Pass rivaling some national parks. But sprinkled among the hundreds of campsites throughout the Washington State Park system are yurts, cabins and vacation homes. These so-called roofed accommodations are much more appealing come winter than a soggy tent. While these accommodations are somewhat bare-bones, they nevertheless provide an affordable and peaceful way to spend time in the great outdoors outside the peak summer camping season.

According to data from Washington State Parks, occupancy rates last season from Dec. 1-Jan. 31 ranged from a low of 23% for the yurts at Seaquest State Park near the foot of Mount St. Helens (where, in winter, you can get as close as the Marble Mountain Sno-Park) to a high of 58% for the vacation houses at Cape Disappointment, which include the assistant lightkeepers’ residences. (If that’s booked, try the steward’s house just upriver at Fort Columbia.) The ever-popular Cama Beach cabins, meanwhile, were just 26% occupied last holiday season.

“There’s nothing like going out on a windy, rainy hike but knowing you can come back to a toasty cabin or yurt to dry out, sip a hot beverage under a blanket and play games with family and friends,” said Washington State Parks representative Meryl Lassen.

Why would anyone wander around in the dark on a cold, wet Pacific beach, much less thousands of people at the same time? To get their hands, and taste buds, on a razor clam. These delectable mollusks have enthralled renowned local chefs for preparations from soy sauce and sake to clam chowder.

The holiday season is normally smack in the middle of prime time for razor clams, with clam dig days sanctioned by the Washington Department of Fish & Wildlife. But there is a big and disappointing caveat this season: marine toxins.

Shellfish managers test the razor clam population regularly before giving the green light to any upcoming clam digs and recently found unsafe levels of domoic acid. The department requires two tests taken 10 days apart that meet Department of Health guidelines before resuming the recreational clamming season. “There is no rhyme or reason behind these toxin outbreaks,” wrote WDFW’s Mark Yuasa via email. “Once it gets going, it should be gangbusters!”

Check wdfw.wa.gov/fishing regularly for updates on when razor clamming season reopens. When it does, try a guided razor clam outing at Iron Springs Resort or The Tokeland Hotel, where co-owner Zac Young will take guests out personally. If you know the basics but don’t have the gear, stay at Adrift Hotel in Long Beach, where you can rent clam digging equipment.