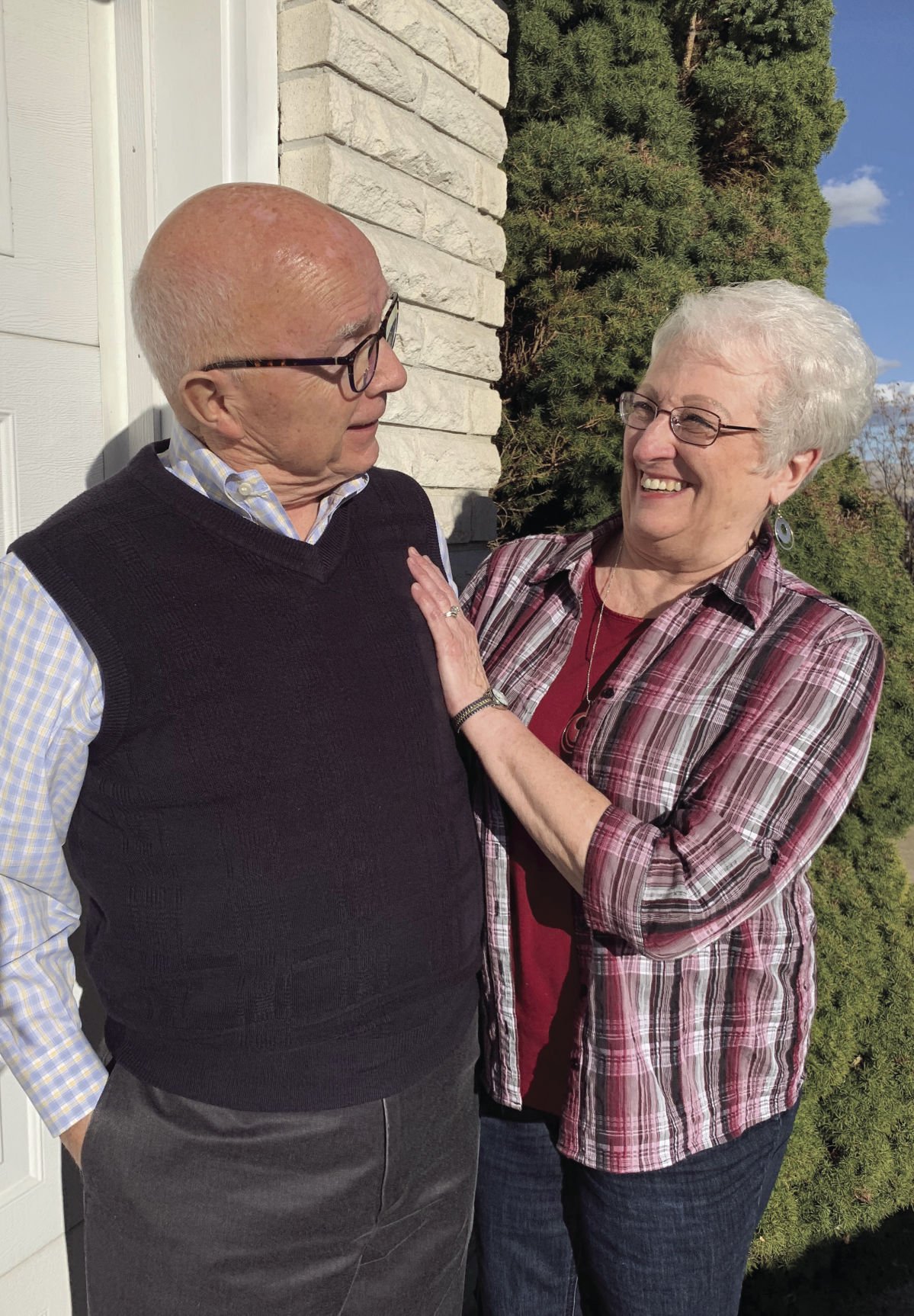 Mal's advice: "Listen to each other. Don't take each other for granted. Maurine says "If you're not happy now, don't expect your spouse to make you happy. Because that never works." 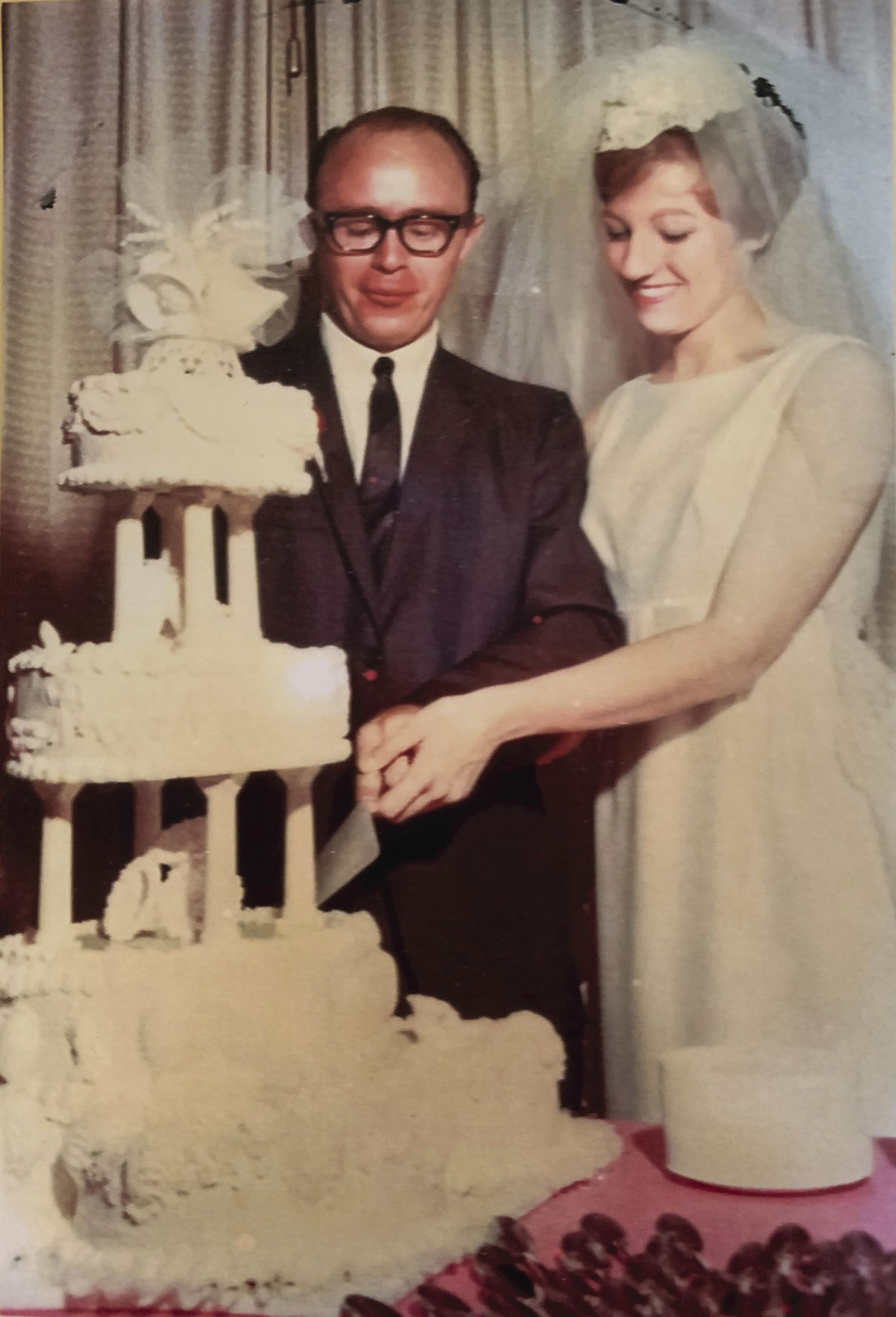 Mal and Maurine on their wedding day on August 17,1968. Photo courtesy of the couple 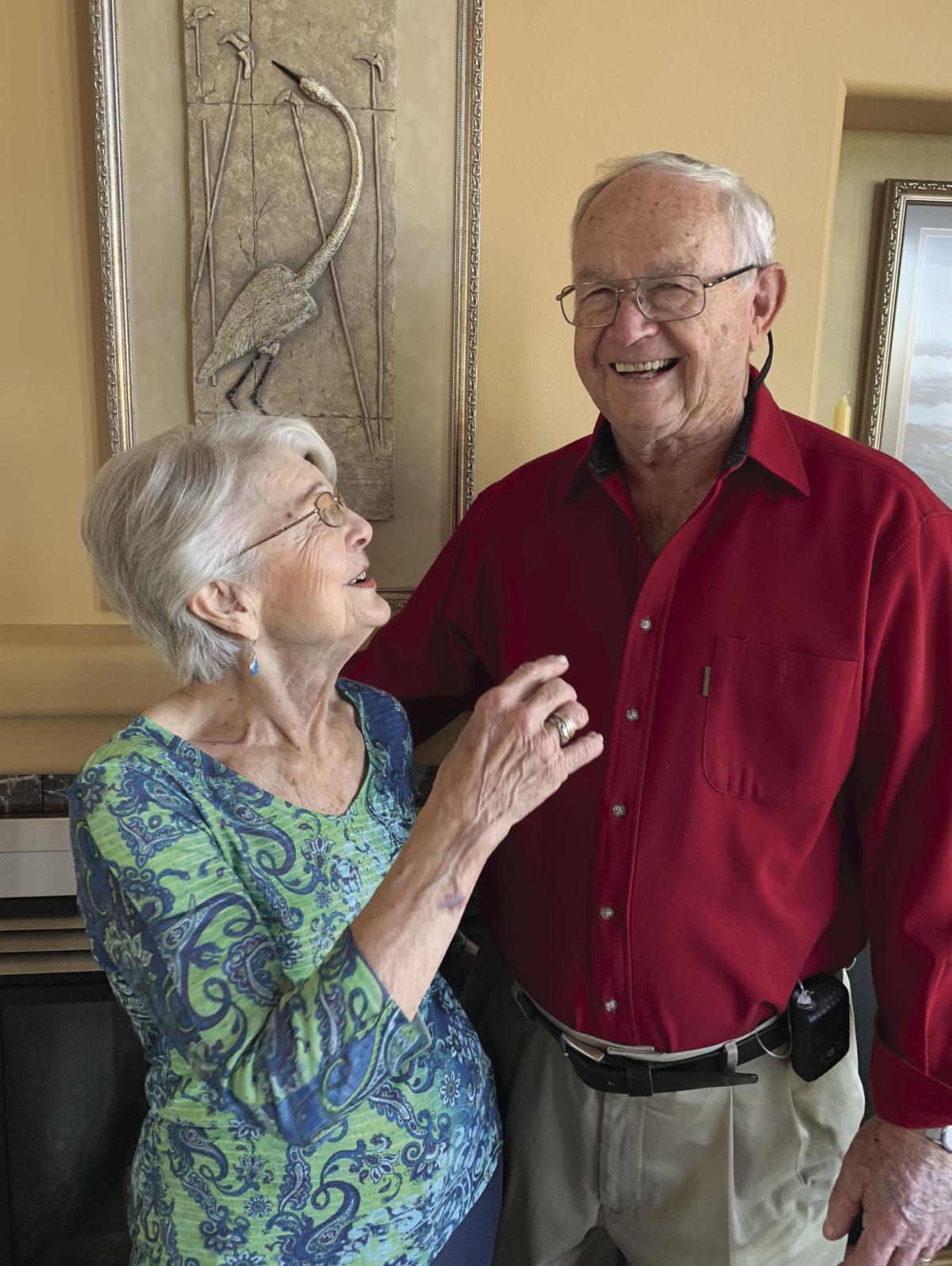 Ruth and Leroy Ganser in their Sunnyside home. Ruth says "Don't try to change each other. Compromise!" Leroy says if they didn't have two votes on something, they wouldn't do it. 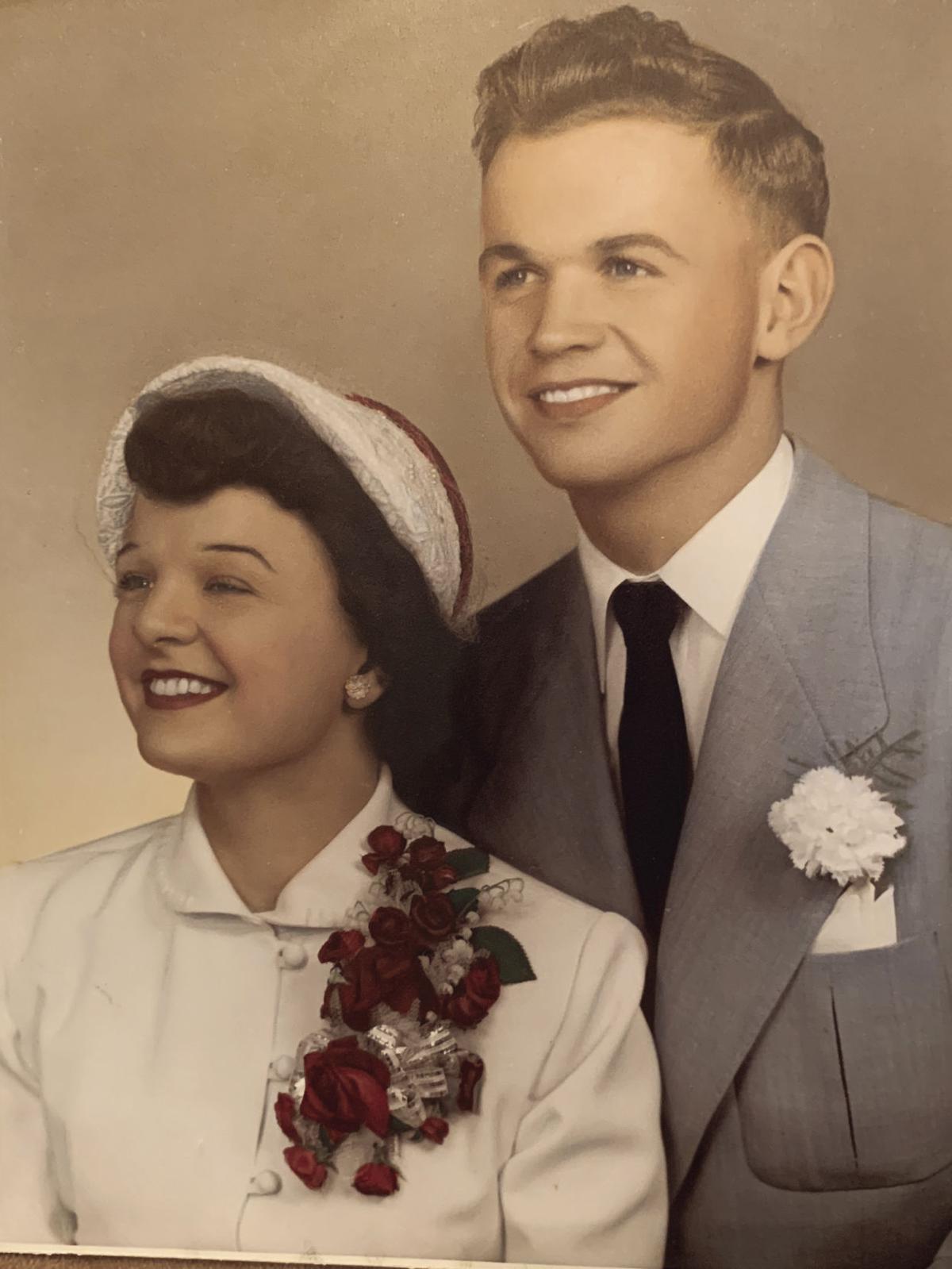 Ruth and Leroy on their wedding day on June 9, 1953. Photo courtesy of the couple 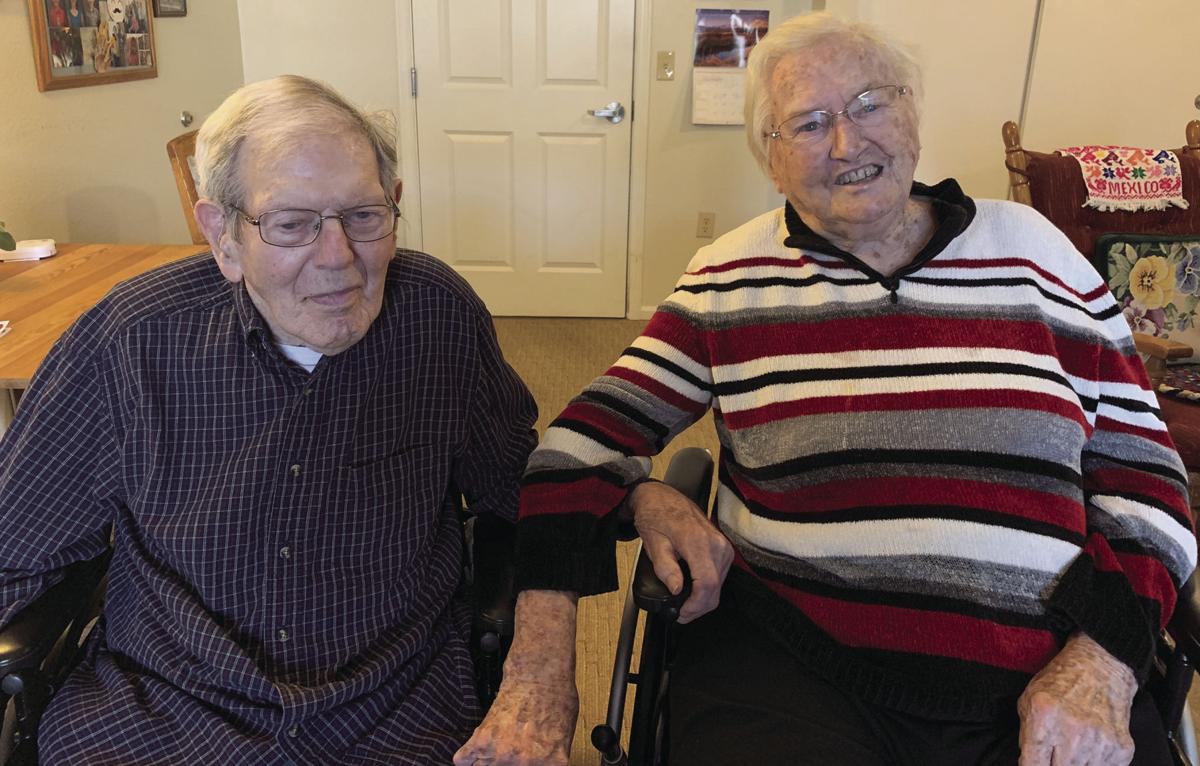 Ernie and Henrietta are 96 years old and share the same birthday. She says "Whenever there were any problems, we'd pray about it. And we loved each other. He's a sweet guy." 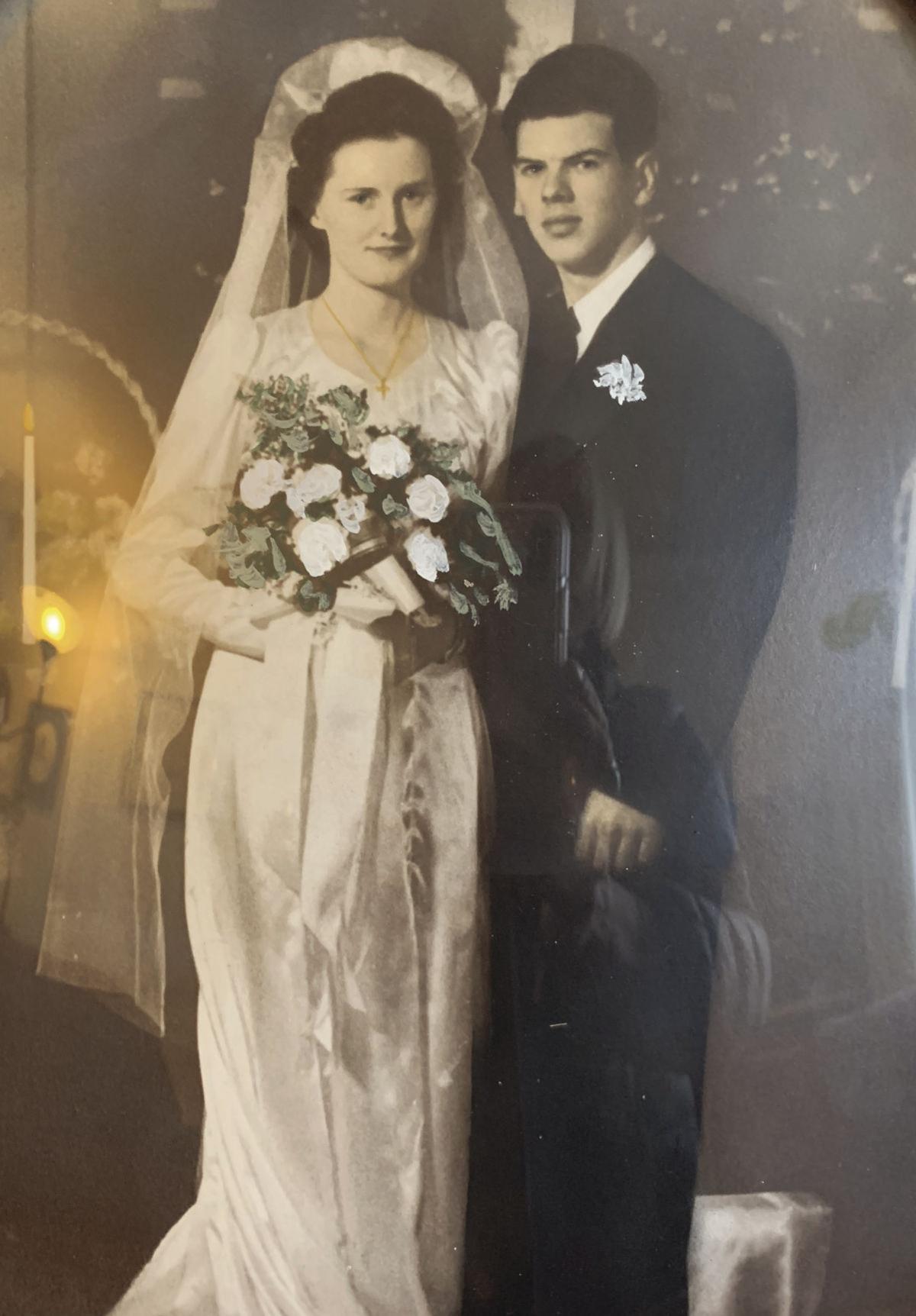 Ernie and Henrietta on their wedding day on June 18, 1943. Photo courtesy of the couple

Mal's advice: "Listen to each other. Don't take each other for granted. Maurine says "If you're not happy now, don't expect your spouse to make you happy. Because that never works."

Mal and Maurine on their wedding day on August 17,1968. Photo courtesy of the couple

Ruth and Leroy Ganser in their Sunnyside home. Ruth says "Don't try to change each other. Compromise!" Leroy says if they didn't have two votes on something, they wouldn't do it.

Ruth and Leroy on their wedding day on June 9, 1953. Photo courtesy of the couple

Ernie and Henrietta are 96 years old and share the same birthday. She says "Whenever there were any problems, we'd pray about it. And we loved each other. He's a sweet guy."

Ernie and Henrietta on their wedding day on June 18, 1943. Photo courtesy of the couple

There’s a lot of advice out there about how to make your marriage last. Listen to each other. Carve out quality time. Divide up household chores. Touch as often as possible, even if it’s just a kiss on the cheek while you’re stirring your morning coffee. There’s a reason all this advice is needed, because 40 to 50 percent of married couples in the U.S. end up getting divorced.

I decided to talk to the real experts — three Yakima Valley couples who’ve been married 50, 65 and 75 years respectively, about how they’ve managed to stay happily married so long.

Malcom (Mal) and Maurine Arnett of Yakima hit their golden anniversary in August and it’s obvious they’re still in love. They listen intently to each other and finish each other’s sentences. They sit close to each other, and Maurine reaches out to touch Mal’s arm as he talks.

She met him in church in her home town in Kansas when she came home from college for summer break. He was the youth director at the YMCA, and they were in choir together. Maurine says “The first real date we had, we doubled with another couple to a Kansas City Royals game.” He was eight years older, and grins when he explains. “I was a confirmed bachelor of 31 when we got married. I was content, but she wasn’t.”

Mal worked at YMCAs across the country and ended up at the Y here in Yakima. Maurine taught kindergarten until she started having kids, then went back to work at the Y as well when the kids got older. She’s retired, but Mal still works as a real estate broker. He says “I think we had a commonality in our Christian values and beliefs so that kind of got us over the rough times in our marriage. When you have a commitment, when it’s not about us, it’s about family — I think that keeps you together.”

They let each other have their own space, Maurine says. “He’s got his own office and I have my quilting room,” and Mal adds “I think that’s a key in marriage. You’re together, but you also need your own time. Your own space. We trust each other.” They keep separate financial accounts too, so they don’t fight about money. Maurine says “If we go out to eat, which we do quite a bit, a lot of the time, I buy, and I buy a lot of the groceries. And I buy all the fabric I want.” Mal fakes a concerned look and asks her “How much money DO you have?” Maurine cracks up, her shoulders shaking with laughter.

Humor is obviously a strong part of the glue that holds these two together.

Maurine says “When we were flying to North Dakota this summer, we were about to land and he was being goofy and I was laughing and there was this lady across from us and she said ‘You guys are so fun to watch. How long have you been married?’” Fifty years and going strong.

Leroy and Ruth Ganser of Sunnyside met while in high school in Leola, South Dakota on a Saturday night, when everyone would come to town to trade their milk and eggs for other goods at the town store. Leroy says “I can’t tell you what attracted me, but I said to myself ‘She’s the girl I’m going to marry.’” Ruth says she liked him because he was funny, and they started dating senior year. She went off to college while he stayed home and worked construction. They got married two years later.

She became a nurse in Leola, but quit working when she got pregnant with their second child. Her uncle had moved to Sunnyside and was building homes there. Construction work was hard to find in South Dakota at the time, so they decided to move to Sunnyside in 1954 and Leroy started working for her uncle. She went back to work when the kids got older.

Their bond has always been rooted in faith, loyalty, and hard work. Ruth says “We both came from pretty humble backgrounds, so we had to stick together through good times and bad times. I think the way you get through those times makes for a successful marriage. You have to trust each other, you have to rely on each other.” They always made decisions together, Leroy says, “and if we didn’t agree, if there weren’t two votes, we wouldn’t do it.”

They share a love of the outdoors, restoring carousel horses, and going on adventures. They trekked up Mount Adams, Mount Hood, and Mount Rainier; and visited places like Switzerland. “Do things together,” says Leroy. “We have separate pastimes, but we do things together.”

He’s 85 and she’s 84, and health challenges are a reality they face together, Ruth says. “Don’t expect everything to be glorious for the rest of your marriage. Because there will be some hard times.” The hardest was the death of their daughter from ovarian cancer. Their son overcame health issues, and Larry must continuously monitor the diabetes he was diagnosed with years ago. Ruth says her nursing training helps.

They’ve always made time for each other. On birthdays and anniversaries, Ruth says “We either go somewhere or do something special — just the two of us. Even when we had four children at home we would try and go out to dinner at least once a month.” Even now it’s a ritual — they go out to dinner once a week.

Ernie and Henrietta Eells of Yakima have been married longer than most of us have been alive. He came over from Shelton to attend a swimming party in Ellensburg where her parents had a farm, and the two were introduced by her pastor. Ernie still remembers when they took their first stroll alone. “It was on the farm, and I walked you way down to the corner and back, and your mother was looking,” he says to her with a smile.

“Between the two of us, we knew we liked each other and God brought us together.” Henrietta adds. “He had curly hair and he was a fun guy — so why wouldn’t you be drawn to him?”

They waited three years before they got married, tying the knot after they went to Seattle to attend Bible college. They credit their faith for their strong marriage, and getting them through the worst of times, including the loss of their eldest daughter from a mysterious illness at the age of 13. “God has been so good to us,” says Henrietta. “We’ve had a lot of tough times, but he always keeps us together.”

Every Valentine’s Day, he would get her a heart-shaped box of chocolates. They gardened together and they both liked hiking in the mountains. Asked what advice she’d give newlyweds, Henrietta offered this: “Love each other. There can be difficulties, but you never think about separation, you think about getting it figured out.”