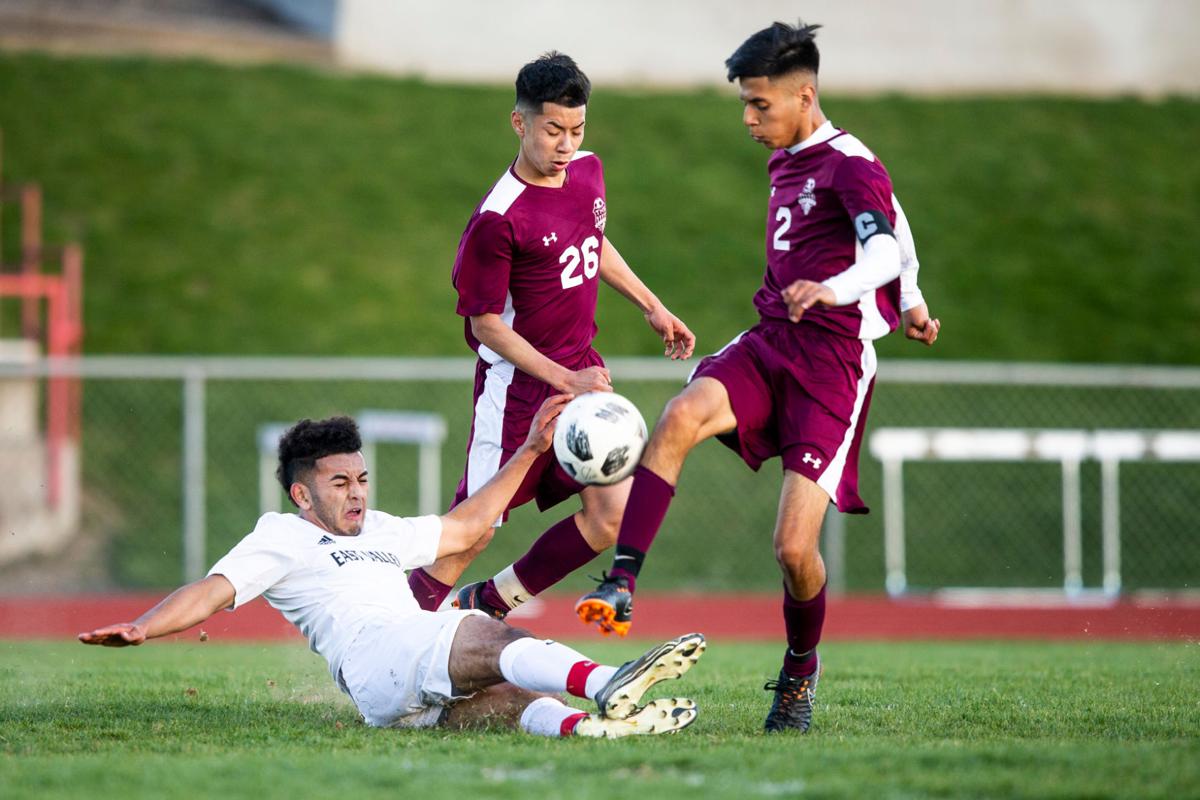 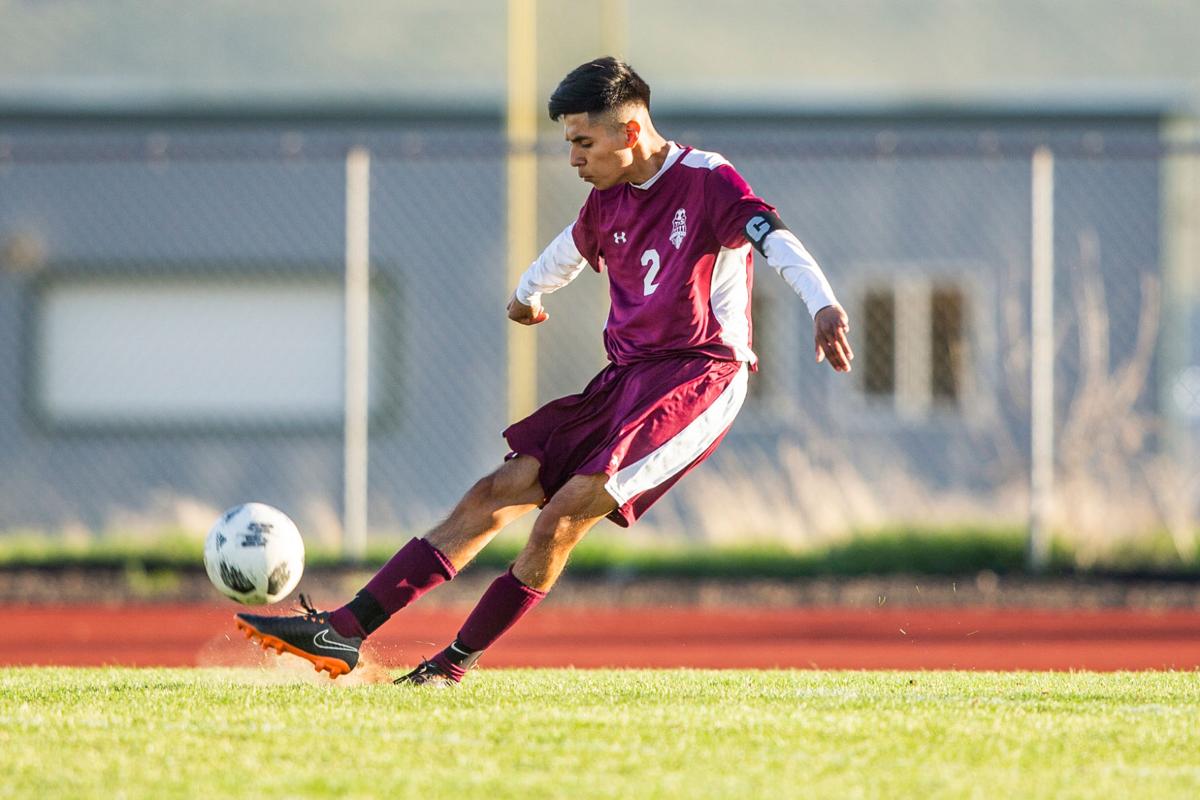 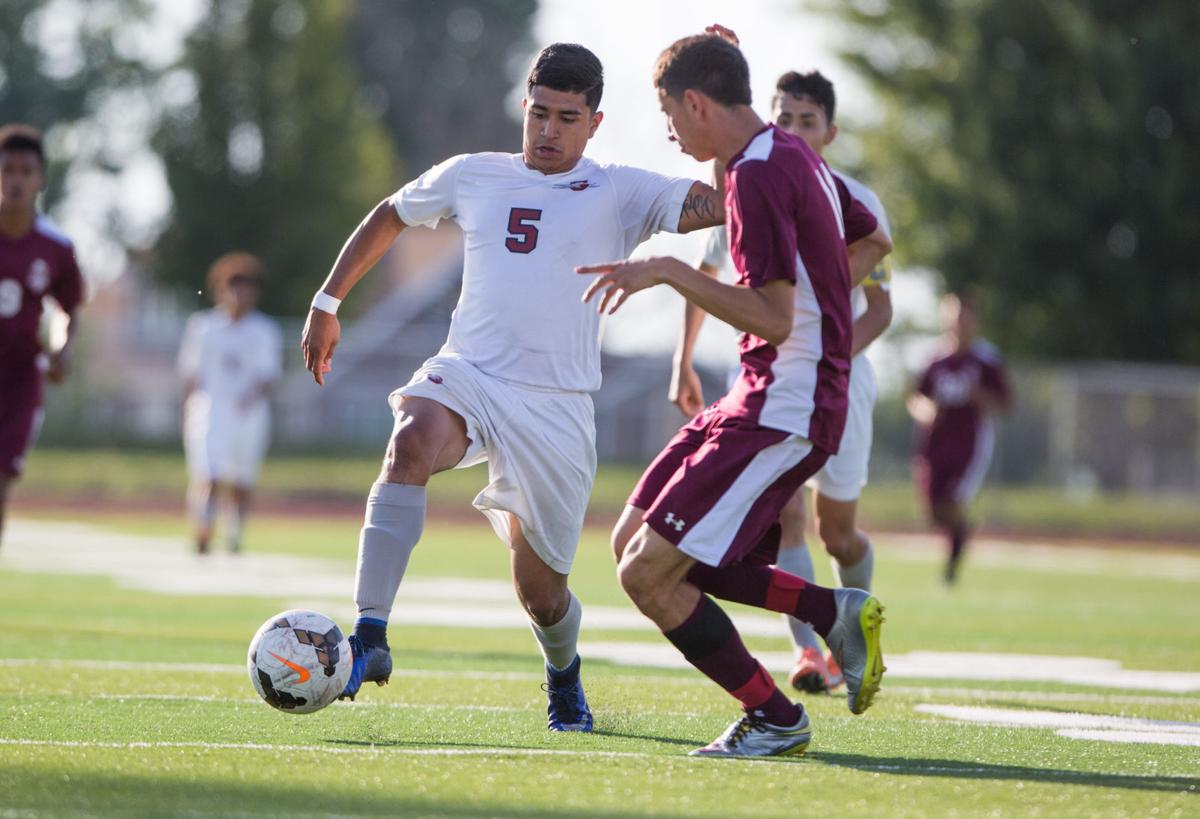 Grandview forward Alvaro Flores (5) attempts to dribble past Toppenish defender Hector Robles during a Class 2A state soccer first round match on Tuesday, May 18, 2016, in Grandview, Wash. (MADISON McCORD/Yakima Herald-Republic)

Grandview forward Alvaro Flores (5) attempts to dribble past Toppenish defender Hector Robles during a Class 2A state soccer first round match on Tuesday, May 18, 2016, in Grandview, Wash. (MADISON McCORD/Yakima Herald-Republic)

“There was Ovi for sure,” said Sanchez, referring to 2012 graduate Osvaldo Martinez. “I watched him play when I was in middle school and saw a lot of his games. I loved to watch him because of his energy and skill and the way he fought for the ball. He motivated me.”

That motivation turned into a lineage that CWAC boys soccer coaches have been annually challenged by but fully appreciate.

Martinez, who led the Wildcats to 18 wins in 2012, was named the conference’s defensive player of the year, an coveted honor that coach Uriel Gonzalez’s back line has earned in five of the last six years. That’s five different players with the most recent being Sanchez, who became the first to do it as a junior.

And his memory on this topic is as sharp as his marking ability.

That’s where this rare run of defensive excellence gets even more personal for Sanchez, whose older brother Oliver was the 2014 winner. That year the Wildcats had 11 shutouts, won the district title and brought home a third-place state trophy.

“Winning it last year meant a lot to me for the team and how hard we worked together,” Sanchez said. “But with my brother winning it, it meant even more. He was a good role model for me since we were always defensive players. When it was my turn on varsity, he has always pushed me to keep getting better.”

Gonzalez, a 1999 Toppenish graduate in his 13th season as head coach, acknowledges the motivational aspects of this run of defensive awards. And the results are in the records: Since 2012, when Martinez got it started, the Wildcats are 51-9 in league play.

“The kids do take notice of the award and that’s good because we pride ourselves on being a defensive-minded program,” Gonzalez said before Wednesday’s practice. “We stress ball possession as our best defense, and as coaches we’re lucky to have kids who are committed to believing in this.”

Sanchez’s primary position is right back, but Gonzalez often takes advantage of his senior’s versatility and moves him around based on expected matchups.

“He can do so many things on defense and he’s willing to do anything,” Gonzalez noted. “He’s a great example of what a senior can do for a team.”

“Sometimes coach moves me to sweeper or more of a one-on-one position,” Sanchez said. “He lets me know the day before what to expect. My brother played different positions and would tell me how important that was.”

Whether or not Sanchez becomes the first during the run to repeat as the CWAC’s top defender remains to be seen, but Selah’s defense will certainly have something to say about that. The Vikings are 6-0 in league, a game up on Toppenish and East Valley, and have recorded five shutouts in CWAC play, including a 1-0 triumph over the Wildcats last week.

Sanchez has tremendous respect for this league on the defensive side. In each of the last two years the Wildcats have reached the state quarterfinals only to be turned back by 1-0 losses to CWAC opponents — East Valley last year and Quincy in 2016.

“We had a good run going and Selah was a wake-up. Hopefully we’ll use that,” said Sanchez. “I suppose anything is possible (with another player of the year award) but I’m just glad to get one after my brother did. This league has a lot of great defenders and it always has.”

Most of whom, lately, have worn the grey and cardinal.

CWAC defensive players of the year