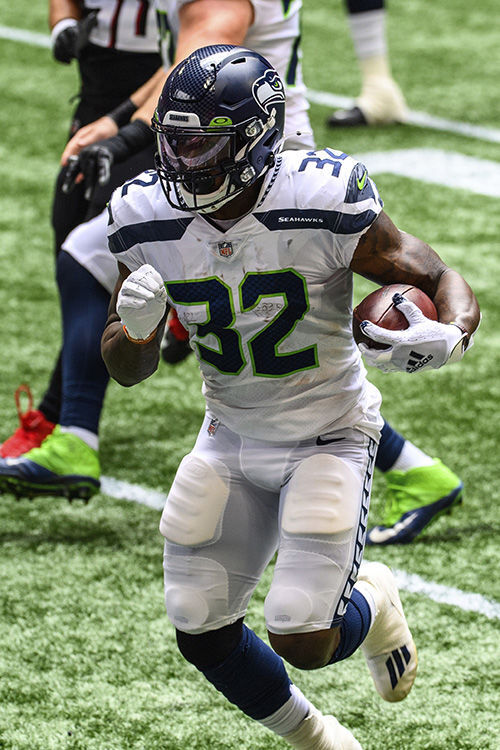 Seattle Seahawks running back Chris Carson (32) runs towards the end zone for a touchdown during the first half of an NFL football game, Sunday, Sept. 13, 2020, in Atlanta. The Seattle Seahawks won 38-25. (AP Photo/Danny Karnik) 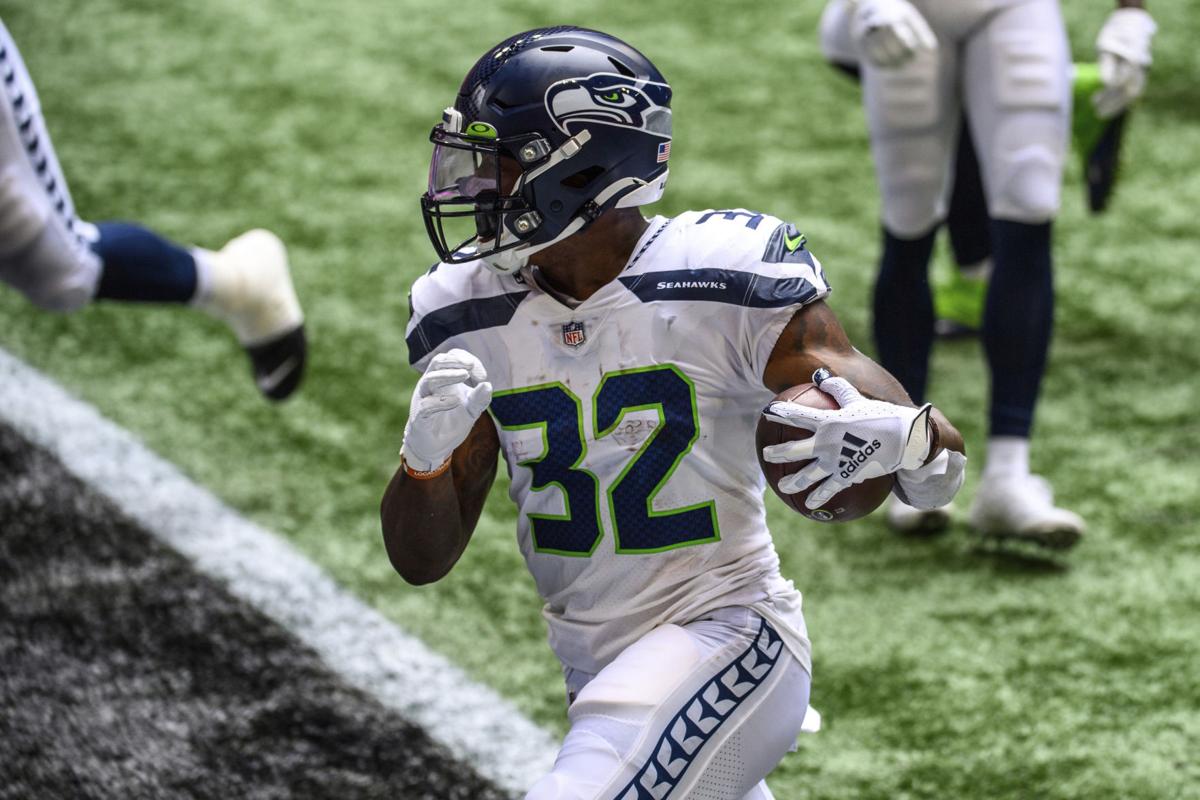 Seattle Seahawks running back Chris Carson (32) scores a touchdown during the first half of an NFL football game, Sunday, Sept. 13, 2020, in Atlanta. The Seattle Seahawks won 38-25. (AP Photo/Danny Karnik)

Seattle Seahawks running back Chris Carson (32) runs towards the end zone for a touchdown during the first half of an NFL football game, Sunday, Sept. 13, 2020, in Atlanta. The Seattle Seahawks won 38-25. (AP Photo/Danny Karnik)

Seattle Seahawks running back Chris Carson (32) scores a touchdown during the first half of an NFL football game, Sunday, Sept. 13, 2020, in Atlanta. The Seattle Seahawks won 38-25. (AP Photo/Danny Karnik)

SEATTLE — Sunday’s game had to feel like one of the stranger ones of Chris Carson’s career.

He played an undeniably big role in Seattle’s 38-25 win over the Atlanta Falcons, scoring the first two touchdowns of the Seahawks’ season on passes from Russell Wilson.

He ended up tying a career high with six receptions and setting new career highs in receiving yards (45) and receiving touchdowns (the two scores, which also tied the most he’s had in any season).

But Carson, the team’s feature back coming off two 1,000-yard seasons, also tied a career-low with six carries for 21 yards, the fewest of his career, one fewer than free agent signee Carlos Hyde had Sunday.

Carson splitting some carries with Hyde was to be expected — Hyde is himself a proven back who also topped the 1,000-yard mark last year with Houston.

And if you’re going to Let Russ Cook, inevitably there won’t be as many carries for the running backs.

Monday, Carroll said to expect those numbers for both Carson and Hyde to go up as the season goes on, something that those who liked the way the offense was distributed against the Falcons — 35 passes and 20 runs overall — may flinch at a little bit.

“First time out it went fine,” Carroll said of the way the running backs were used. “Seven and six carries wasn’t enough for our guys and we need to get more. We were at 20 (runs). We want to get more than that in general. But when Russ was completing every pass we weren’t discouraged about moving the football. But we love running the ball, we always have, and those guys will get more carries as we move down through the schedule.”

Obviously, Seattle’s plan worked. And obviously, it was uncharacteristic.

Seattle’s 65.52 pass-to-run percentage was the highest of any team in the NFL in Week 1 that won its game (the top five all lost, each obviously throwing more late to try to come from behind).

Last year, only five teams ran it more than Seattle, as the Seahawks finished with a 54.34 pass play percentage in a season they averaged 30 runs a game — 10 more than they had Sunday.

If the passing game keeps working the way it did against the Falcons, it’ll be hard to resist wanting to keep putting the ball in Wilson’s hands.

Atlanta’s secondary, though, was regarded as a question mark heading into the season and looked like one during the game. Seattle will have to rely on the run more against teams with better pass defenses — such as this week’s opponent, the Patriots, who allowed the fewest passing yards in the NFL last year at 173.9 per game and gave up just 182 Sunday in a win over Miami.

Maybe that will give Carson the opportunity to have a more Carson-like game.

Adding to the intrigue of how the Seahawks will use their running game this season, they want to get Hyde involved and also sprinkle in Travis Homer, especially on third downs. Homer had two receptions Sunday, meaning Seattle’s backs combined for eight catches, almost half of their 14 carries.

Sunday, Carson had 28 snaps (the seventh-fewest of his 34 games with Seattle), Hyde 21 and Homer 13, adding up exactly to the 62 offensive snaps Seattle had in the game.

Carroll said last week and again after the game that divvying up snaps and carries will always be a feeling based on opponent and matchup and how each back is performing.

“It felt good giving those guys the chance to keep them fresh,” Carroll said via Zoom. “Those were two guys that hammer the football (Carson, Hyde) and T-Home (Homer) was such a good change of pace, I just like the three-guy rotation. Imagine how much fresher you can keep a lead guy that doesn’t have that opportunity, and so we’ll just go one game at a time right now.

“We don’t need to call it, anyway — never have. And I don’t think there will be a time in the season where I’ll tell you, ‘Oh, this guy is going to get all the snaps or this guy is not.’ I don’t think that’s what’s going to take place. We’ll just keep moving through the game and see what’s happening and the style of plays and the runs and all.”

Indeed, the injuries to Carson and Penny a year ago compelled Seattle to add Hyde for the needed depth to get through the season.

As for usage, they’ll do whatever it takes to win, of course.

The possible shift in philosophy and a crowded backfield that may get only more full when Rashaad Penny returns midseason comes at a particularly sensitive time for Carson, who enters the final year of his contract, due to make $2.13 million this season.

Every situation, though, is different.

Seattle could look at Penny (and maybe rookie DeeJay Dallas, who drew raves in camp) as well as the ability to get a veteran like Hyde as reasons to avoid giving Carson a big deal. Carson said recently he’s had no contract talks with Seattle.

There’s also the uncertainty of next season’s salary cap, which could go down based on revenues this year (though that obviously didn’t stop the Vikings and Saints from investing big).

Carson is an all-around back, which, of course, is also a big selling point these days. Carroll noted Sunday that Carson’s receiving numbers — six catches on six targets — accurately reflect his ability.

“Chris has great hands,” Carroll said. “He can catch the ball as well as anybody, and he doesn’t get nearly as much work at it but just naturally he’s got great hands.”

Touches, ultimately, are touches, however they come — and Carson may have to get used to getting his in a little different way this season.